That Castellucci sought collaboration with Honegger and the dramatic oratorio’s author Paul Claudel to create this theater piece is no surprise. The Honegger work with its book by Paul Claudel was born in a Europe of clashing ideologies — political, artistic, technical, cultural — on the verge of self destruction. In fact the Prologue to the oratorio was added in 1944.
A time somewhat like the current moment in our now far larger world. Castellucci’s theatrical world explores an abyss of possibilities for any moment of tragedy in this or any world. For Castellucci theater is a unique language, well beyond the mere abstraction of musical language. To music Castellucci adds a tangible, physical world — real and simulated. There is the technical world that manipulates and colors the physical world and finally there is an interactive, interpretive world of infinite emotional perspectives.

It is unclear where or how you enter into Castellucci’s world, and it is also uncertain who you are. But you definitely immersed yourself Castellucci’s theater once you found yourself in Lyon’s opera house for Honegger’s mystËre. The curtain rose in silence, a class of twenty-four 17 year-old girls studied silently in classroom made of reinforced concrete with period radiators and banks of neon lights. A bell rang, the girls sprang to life, noisily exited the class room and building. Faint ambient noises (dogs barking, cars, maybe sirens) were perceived over the next few minutes. A janitor appeared, swept a bit, began pulling the tables into the adjacent corridor, over time his actions took on urgency, and finally he violently and sonically heaved the last chairs and tables onto the giant pile in the corridor. He bolted the classroom door, isolating himself in the empty space.
It became apparent that the janitor was female, and we knew that soon she would be Jeanne d’Arc. She ripped the linoleum off the floor with its shrieking sound amplified, she tore out the planking and dug into the earth below. This was our 20 minute, maybe longer, maybe much longer journey into the language of Castellucci’s theatrical world.
Conductor Kazushi Ono now began Honegger’s oratorio. Joan of Arc is a speaking role, initially and through most of the piece her voice was electronically manipulated sometimes mixing it with the music, sometimes amplifying it to make clear and forceful words and sentences. Only in the last three scenes did Joan’s voice become her natural voice as she relived her childhood and accepted her martyrdom. 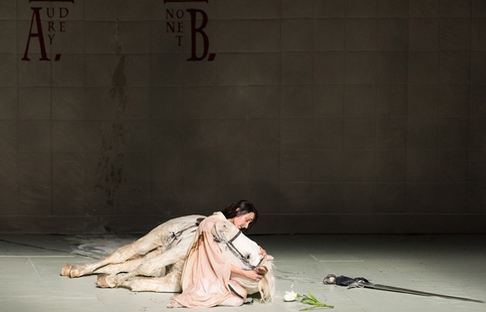 To be expected these final three scenes were riveting — Joan digging into the earth to find her sword, lifted into shining light, Joan dragging her dead horse, a very real horse, onto the stage and to the huge hole she had created, there followed the unforgettable imaged of Joan riding her horse. And then Joan, naked, covering herself with a white floury paste to make herself into the candle of her recalled nursery rhyme, and finally Joan, the stake itself, standing as the erect candle, an offering to the Virgin Mary.
As part of this image of Joan at the stake there then appeared an aged, maybe naked, figure who was (possibly) Joan herself as well as the saints of her visions, Catherine and Marguerite, and perhaps even the Virgin Mary.
Claudel and Honegger’s musical tragedy glories in the huge choruses of oratorio. In turn these choruses offered Castellucci the means to orient the action and to explain and advance the theatrical process. These choruses were indeed the Castellucci’s continuum, and they were persuasive. As well as, to use a Castellucci word, “gaseous.” We did not actually see the chorus until the curtain calls (it was a surprisingly small number of singers considering the size and presence of the chorus role).

tour de force — physical and emotional — performance of first the janitor then the maid of OrlÈans. Castelucci’s Joan d’Arc does not attempt to move us, or ask us to sublimate her tragedy into a transcendent experience, as had, for example, Jean-Paul Scarpitta’s 2005 Jeanne d’Arc au b˚cher in Montpellier. Instead we participate in her suffering, a theatrical participation that leaves us outside any hope of mystical or emotional release. It is theater, nothing more (and what more should there be) and nothing less (it is very fine, challenging theater).
Some of the same things may be said of Honegger’s score (standard orchestra with the addition of three saxophones, an ondes martenot and two pianos). The musical perspective is outside looking in. It is “surface” (to use a Castellucci word) and not essence. Though not closely identified with any of the predominant styles of the early-mid twentieth century Jeanne d’Arc au b˚cher is richly twentieth century in musical effect.
Michael Milenski