Happily, there is more than enough glory to go around. Certainly, substantial credit must go to director Michael Shell for having mastered all of the inherent staging challenges as he unlocked the profound riches of the piece that composer Kevin Puts and librettist Mark Campbell have crafted. Mr. Shell was well partnered in his pursuit by a design team operating at the top of its game.
Silent Night is based on the film Joyeux NoÎl, which captures a historical, spontaneous 1914 Christmas truce between partisan soldiers during World War One. Mr. Campbell’s affecting libretto follows personal journeys in three national camps, and is sung in English, German, and French, with some Italian and Latin (as the combatants pray together). Mr. Puts’ thrillingly eclectic score is at once character/culture-specific and embracingly universal. While much of the story takes place simultaneously in three battlefield trenches, there are important scenes in various localities that individualize the plight of the participants.
Set and projection designer Steven Kemp has wisely chosen to suggest locations, rather than attempting realism. Mr. Kemp’s most beautifully realized effect was to create three large wagons to serve as the bunkers for the Scots, Germans and French. These long but narrow platforms had a skeletal wooden enclosure “box” that was just tall enough to suggest a trench dug in the ground. The succinct look suggested at once a prison and an exposed asylum of emotionally conflicted warriors. This important major playing space was augmented by simple additions, a few period chairs here, a chandelier there, that simply conveyed the necessary place. 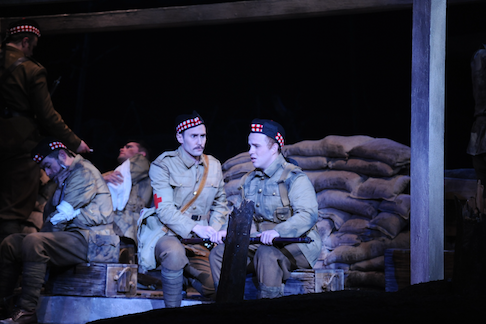 Colin Ramsey as Father Palmer and Mason Gates as Jonathan Dale
Pamela Z. Gray’s moody, varied lighting design contributed very effectively to transition us seamlessly from spot to spot, and to point up every nuanced situation. The opening sequence is but one example: As an opening operatic duet is sung in a “theatre,” the singing is interrupted by an announcement (sound design, Tom Johnson) to say that war has been declared. As the curtain rises, upstage wagons of low, rolling fields with denuded trees advance from upstage to the apron, as lighting transitions from warm stage illumination to the bleak, moonlit reality of a battlefield. These talented designers thereby successfully set the tone and the story-telling style for the whole evening. The diverse costumes from designer Melisssa Nicole Torchia brought welcome color and necessary visual coherence.
Given these creative choices, director Shell managed the large cast against this sprawling canvas with commendable focus and economy of gesture. The entire concept was choreographed with great specificity. The bunker wagons were on casters, able to be re-positioned for visual interest, and even used menacingly in a “circling the wagons” moment. The glory of this piece lies in following the individual narratives and Michael never lost sight of these human stories. He proved to have an uncanny knack for creating naturally evolving stage pictures, and a refined skill for directing our attention to just the right character. Together with a superb ensemble of singers, he fashioned an inevitable ebb and flow of memorable dramatic revelations.
Librettist Campbell stated that the central message is that “war is not sustainable when you come to know your enemy as a person.” The cast assembled for Silent Night have proven to be gifted ambassadors in that pursuit. Anchoring the show, and first among equals, Kirk Dougherty ably embodied the conflicted stage tenor, conscripted against his conscience, who is offered, then rejects command privilege. Singing with his usual burnished security and acted with honesty, Mr. Dougherty adds another memorable role to his growing resume. As his love interest, and essentially the only female role, Julie Adams was the radiant diva Anna Sorensen. Her rich, creamy, agile soprano was of the highest quality, the kind that prompts excited “who-is-she?” intermission chatter (and beyond). Ms. Adams is entrusted to deliver a beautifully judged battlefield prayer, and boy, deliver it she did with heart-stopping effect. You read it here: We will be hearing much more from her. 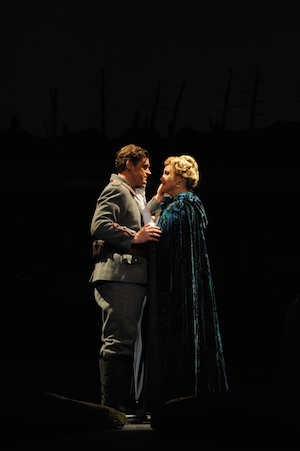 Kirk Dougherty as Nikolaus Sprink and Julie Adams as Anna Sorensen
As the French Lieutenant Audebert, Ricardo Rivera found just the right scope for his particular odyssey. Having had to abandon his pregnant wife Madeleine (a cameo warmly sung by Ksenia Popova), he struggles to make sense of his role in the conflict. This is not only because of his own moral compass, but also owing to the overbearing exhortations of his General (authoritatively performed by Nathan Stark), who surprisingly also turns out to be his father. Mr. Rivera began the evening quite lyrically, with his sensitive, well-modulated intentions occasionally becoming a mite diffuse. But as the tensions heightened, Ricardo turned up the heat and produced ringing, mellifluous vocalizing.
While the opera has been crafted to avoid weighting the focus too much to one character or another, Ponchel is the work’s piËce de rÈsistance. Is there a sunnier, more appealing character in the entire operatic canon? This simplistic Frenchman lives to spread joy and longs for nothing more than daily coffee with his beloved mother. Ponchel proves to be a perfect vehicle for the considerable talents of Brian James Myer. Handsome, charming, stage savvy, and with a polished baritone to boot, Mr. Myer threatens to steal every scene he is in. Ponchel’s “big moment” is one of the most touching in all lyric theatre, and Brian mined every ounce of detail and pathos from it.
Conversely, Mason Gates is charged with engaging us in the plight of the evening’s most embittered character, Scotsman Jonathan Dale. Having seen his brother killed in front of his eyes, he relies on equal parts denial and thirst for vengeance to fuel his actions. The creators use him as somewhat a symbol of a “justified,” blind hatred that fuel and sustain many tragic conflicts. Mr. Gates is a focused, involved actor, possessed of a secure, intense tenor that he is able to weight with a single-minded pain and purpose. He makes us understand the character’s anguish, all the while he disturbs us with his potent hatred. Matthew Hanscom’s imposing baritone brought kind-hearted authority to Lieutenant Gordon, and bass Colin Ramsey’s wondrously sung Father Palmer showed once again that this accomplished Resident Artist is one the company’s major assets. Kirk Eichelberger made a fine impression as the German Officer, his sonorous bass sporting as much secure swagger as his character’s demeanor.
Tenor Christopher Bengochea was smugly efficient as a hectoring Kronprinz, with Vital Rozynko making the most of his stage time deploying his characterful baritone in service of the irritating British Major. Kyle Albertson was a solid Lieutenant Horstmayer, and Branch Fields offered some attractive singing as Jonathan Dale’s felled brother William.
There is no amount of direction, design, scripting, hype, or earnest performances that can make a case for an operatic work that doesn’t “sing” with a beating heart. And here is where Silent Night soars. Composer Kevin Puts has taken Mark Campbell’s inspired words and found voice for an impressive array of styles and musical idioms. Classical opera is paraphrased, there are nods to neo-romanticism and atonality, Berg and Strauss are suggested, and there are uses of quasi-folk songs. But in his restless, ever-morphing sound palette, Mr. Puts has emphatically fused his artistic views of these diverse influences into his own unique statement of dramatically urgent, gratefully constructed vocal lines that are integrated into a virtuosic musical fabric.
The musical writing encompasses everything from solo bagpipe to chamber music to full symphonic outpourings. Mr. Puts has a real champion in conductor Joseph Marcheso, who elicited mesmerizing musical results from the pit and the stage. Additional kudos must go to Andrew Whitfield’s well-prepared chorus. The scoring demands impeccable solo and ensemble work alike from the large orchestra and they did not disappoint. Maestro Marcheso lovingly built an inevitably unfolding arc in a performance of constantly evolving and enriching musical delights.
Silent Night just may prove to be the first enduring operatic masterpiece of the century. Time and history will prove me right or wrong. But I can promise you this: there is no better case to be made for Silent Night than the production currently on view at the California Theatre.
James Sohre