Just now, in this twenty-first century, it returned for five performances, its long absence(s) due to the 150 years the operatic public has preferred operas it finds dramatically more engaging.
Donizetti’s Anna Bolena (the first of his famous three queens) does however introduce a sense of real drama to opera, as his voices explore their personal passions in a flow that almost overrides the divisions of narrative into “numbers” i.e. separate musical pieces — this considered a first, Donizetti’s breakthrough. The passions are hugely powerful, most notably of course in the protagonist who is no longer loved, wrongfully accused and then, no longer a queen, a sore loser. It flows from her first startlingly difficult aria “Come, innocente Giovine” where she expounds that her position as queen is threatened, to her final cabaletta condemning the new queen, Jane Seymour as she, Anna, proudly marches to her beheading. 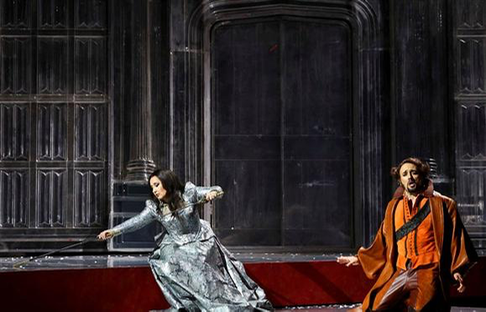 Elena Mosuc as Anna Bolena and Leonardo Cortellazzi as Percy
There were many, many more passions that are brilliantly laid out by Donizetti over the long, very long evening — by the queen-to-be Jane Seymour, Henry VIII, Percy (Anna’s former lover) and his friend Lord Rochefort (Anna’s brother), plus the page Smeton in seemingly countless arias and duets —the extraordinarily beautiful Act II duet of Percy and Lord Rochefort was indeed notable. Plus a plentitude of trios, quintets and finales with chorus.
It falls to the ambitious queen Anna Bolena to hold all this together by sheer force of artistry and personality. If 53 year-old Romanian/Swiss soprano Elena Mosuc seemed tentative in her first aria (the usual reaction of critics to this aria in performance) by the end of the opera she had found the histrionic and vocal depth and beauty of tone to thrill us first with her quiet, splendidly vocal reminiscences (usually said to be her madness) and then her full fury in “Coppia iniqua.”
La Mosuc is an accomplished bel canto heroine of rich low notes, a full middle voice and beautiful high notes, notably a resplendent high E-flat that we heard over and over throughout the evening. You might wish for more dramatic heft and particularly for ornamentation that arises more naturally out of the vocal line, nonetheless her Anna Bolena was a satisfying tour de force.
Young American soprano Jennifer Holloway as Jane Seymour well held her own amidst a regional European cast, notably fine Italian tenor Leonardo Coretllazzi as Percy and Portuguese baritone Luis Rodrigues as Lord Rochefort. Turkish bass-baritone Burak Bilgili cut the imposingly wide figure of Henry VIII well enough without establishing a force of personality, histrionically or vocally to ground his participation in this passionately complicated (long) story.
Giampaolo Bisanti, music director of Bari’s Teatro Petruzzelli, led Teatro S„o Carlos’ willing orchestra, the house acoustic itself adding a roughness of tone that added a pleasing sense of times past to this old opera. This maestro, well traveled to Europe’s major stages in standard nineteenth century repertory, drove Donizetti’s music relentlessly seldom relaxing into the style and only rarely finding the soaring beauty of bel canto.
The 2007 production came from Verona’s Teatro Filarmonico, staged by Graham Vick and his designer Paul Brown. Mr. Vick based his staging on his assessment that the two women (Anna and Jane) use the bed to get themselves to the throne and the king (Henry VIII) uses the throne to get to the bed. Thus there was first a huge baldaquin bed, then later a huge sculpted head of blindfolded Justice followed by a huge (stage wide) sword that fell, and finally a crown of thorns, etc. — all unifying symbols to pull us through the numbers, which is to say fuse the musical pieces into a compelling narrative. A gratuitous visual quote was the enactment of the famous portrait of Henry VIII and Anna Bolena on horseback that hangs in London’s National Gallery. 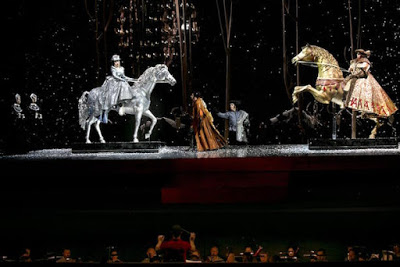 No amount of staging or dramatic intelligence can obliterate the fact that this bel canto opera is purely and simply beautiful singing into which you must be able to immerse yourself, and that Donizetti’s first queen Anna Bolena will always sit uneasily if restlessly on the fringes of the repertory.
Michael Milenski