And always mean at least something to everyone.
Case in point — the new Deborah Warner production of Billy Budd at the Teatro Real in Madrid where Billy is ambitious and assertive, where his nemesis Claggart is a sadistic brute and where his alter ego Captain Vere is a weak, uncertain young man. Mme. Warner does indeed make the case, sort of, that Billy Budd may be read in such light.
Forsaking the intrinsic naturalistic and psychological impressionism of Britten’s muse Mme. Warner and her designer Michael Levine created an expressionistic world, the specific location was an actual aircraft carrier of 1940’s rather than Britten’s man-of-war (frigate) of the 1790’s, both ships in fact named the HMS Indomitable. Thus the spaces were wide open, there were huge platforms that moved up and down. The copious ropes and webs were metaphors of human entanglement and imprisonment rather than the essential tools of sailors — the means they used to move their ship and their lives.
While the officers were of the 1940’s, the sailors, a massive number (possibly a hundred), were interpreted as grubby galley slaves (the rowers of the quick, old Mediterranean ships), forced to work (here usually scrubbing the decks) by brutes with clubs and whips. 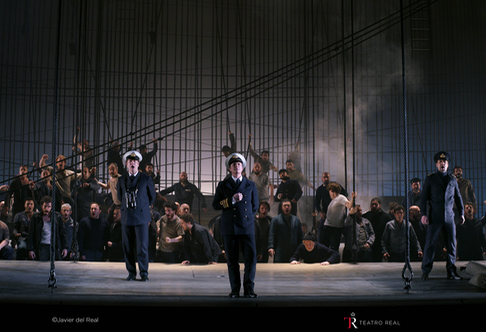 Officers and sailors of the HMS Indomitable
There was impressive scenographic rhetoric, the deck of the aircraft carrier (the full stage) rose to reveal a hundred or so suspended hammocks (a reference to the 18th century), the suspended command bridge of the ship was swung back and forth in a brutally thwarted mutiny, and finally Billy Budd disappeared up a ladder into the fly-loft for the hanging (one heard the clicks of the safety lines being attached).
There was impressive musical rhetoric emanating from the pit as well, Teatro Real music director Ivor Bolton incising precise musical shapes from his excellent players. The flute solos of the Billy death oration eschewed the mystical pull of death, invoking instead nervousness and certainty. And the maestro brought the full, massive orchestral force to a shattering fortissimo that made the presaged death of Billy a truly huge, indeed monumental moment. His was an impressively powerful reading of the Britten score in detached, mannered moments rather than in a flow of emotional atmospheres.
Musically the effect was somewhat like the Janacek of Jenufa.
Billy Budd was sung by South African baritone Jacques Imrailo in a very physical performance. There were spine tingling moments like when he heaved himself up on a downstage rope to sing his farewell to his former ship the Rights o’Man, like the viper-strike punch that felled Claggart, and like the confident, frightening ascent to his death. It was a beautifully sung, total performance that alone was the soul of this evening. 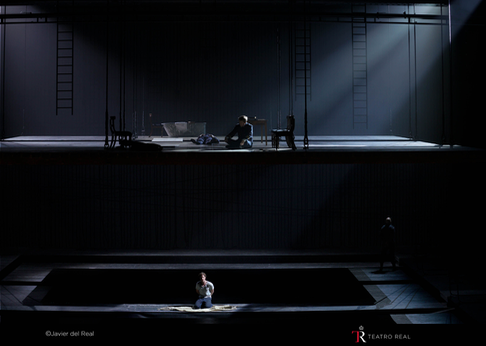 Above: Captain Vere, below: Billy Budd
There was, strikingly, no soul to be found in Captain Vere, sung by British tenor Toby Spence, and perhaps this was the intention of metteur en scËne Deborah Warner. There was no intimation of the intense, human conflicts that torment Claggart, well sung by British bass Blindlay Sherratt but in absolutely one-dimensional tones.
The Teatro Real is one of the world’s major stages. The casting, mostly British, of Billy Budd was uniformly top notch, evidently fulfilling the needs and wishes of the production. The orchestra and chorus of the Teatro Real are estimable, its aspirations to producing fine opera were palpable. This Billy Budd is a co-production with Paris, Rome and Helsinki.
Michael Milenski