Notably the crystalline story telling of Puccini’s sad little tale by director John Caird. Gone, well mostly gone, was his forced metaphor of life becoming art, i. e. the Paris of Marcello’s paintings (a collage) as the backdrop for MimÏ’s death to become Rodolfo’s muse (blatant in his 2014 SFO staging). In its place nothing but detail, and no detail in the staging not discovered in the Puccini score — in large strokes the precise restaurant service at the CafÈ Momu, in tiny strokes the sprinkling of water droplets to triangle tings. With this specificity director Caird found his story in the music. Marvelous even magical storytelling was the result. 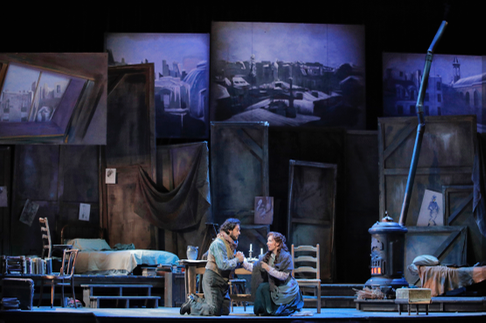 Arturo ChacÛn-Cruz as Rodolfo, Erika Grimaldi as MimÏ
Conductor Carlo Montanaro was a skilled collaborator, providing an energetic canvas for director Caird’s realization of Puccini’s four brief vignettes of Parisian bohemian life. Montanaro’s reading vividly portrayed this Paris and its little tragedies without imposing the power of music to overwhelm their importance. His was a descriptive reading of that world, not a profound descent into its most private moments. Except, maybe, in soprano MimÏ’s moving Donde lieta, splendidly delivered by Erika Grimaldi.
The masterpiece status of Puccini’s opera was resoundingly reaffirmed.
Amidst a cast that seemingly could have stepped right out of Montmartre Italian soprano Erika Grimaldi stood out as the voice of Italian opera, delivering the delights of Italian schooling (ma che scuola!). In a full, warm voice that bespoke Puccini’s Tuscan landscape she articulated language with throaty finesse and allowed her tongue ample freedom to roll and punctuate. The largest voice of the evening, well exploiting the sculpture of soaring lines la Grimaldi was indeed this BohËme — the title of the show. 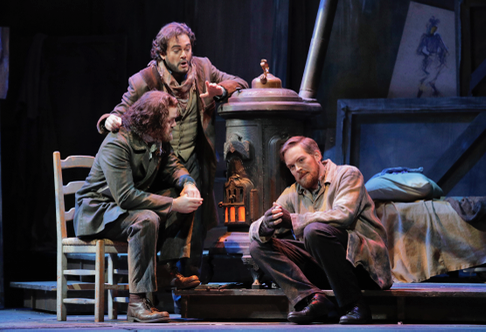 Brad Walker as Schaunard, Arturo ChacÛn-Cruz as Rodolfo, Scott Conner as Colline
Mexican tenor Arturo ChacÛn-Cruz stretched his voice to take on Rodolfo, his lighter timbre permitting him to exploit the flow of Puccini line rather than to mimic tenorial mannerisms. His Rodolfo was youthful, charming and real. Norwegian baritone Auden Iversen was a small scale, believable Marcello, his darkly hued voice adding unexpected color and therefore an earthy reality to this mix of bohemians. American bass Scott Conner was a low affect Colline. He as well fit right into the gang, his aria to his coat sung softly and very beautifully. Adler Fellow Brad Walker made himself leader of the gang with his lively, fun and richly vocal presence.
Inexplicably cast (yet again) as Musetta Mozart soprano Ellie Denn made this vibrant Puccini character matronly in beautiful, measured tone.
MimÏ’s death, the fourth vignette, slowly and softly revealed each of the bohemians coming to grips with death, making Rodolfo’s death cry a sudden recognition of finality to a magical vision of young life as art. It was indeed beautiful.
And very slick.
Michael Milenski