Iago’s gesture of vehement vexation opens the drama with the shattering of
a symbol of deception and artifice that complements Iago’s masking of his
‘self’ – ‘I am not what I am’. Then, at the close of Act 2, Otello is
confronted by a mirror which reflects back at him a masked figure. Finally,
prone and emasculated, following a seizure brought on by Iago’s ‘proof’ of
his wife’s unfaithfulness, the Moor is himself wreathed with this mask by
his puppet-master. But, the destruction of this theatrical adornment at the
start of the opera reminds us, too, that Iago’s iniquity will be
exposed, as Shakespeare’s Iago himself foresees: ‘when my outward action
doth demonstrate/ The native act and figure of my heart … I will wear my
heart upon my sleeve/ For daws to peck at’.

Moreover, in placing Iago, rather than the eponymous Moor, centre-stage in
the initial moments, Warner foregrounds an equality of dramatic status
which mirrors Shakespeare’s text. Iago speaks by far the greater number of
lines and it is his compelling soliloquies which make the audience almost
complicit in the villain’s stratagems. And, in a letter to Boito, Verdi
described Iago as ‘the Demon who moves everything’, noting that ‘Otello is
the one who acts: he loves, is jealous, kills and kills himself.’ Despite
Otello’s titular status, in Warner’s production Jonas Kaufmann’s
introspective Moor and Marco Vratogna’s vengeful ensign are equal
participants in the tragic unfolding, in a production which embraces the
protagonists within a strong ensemble. 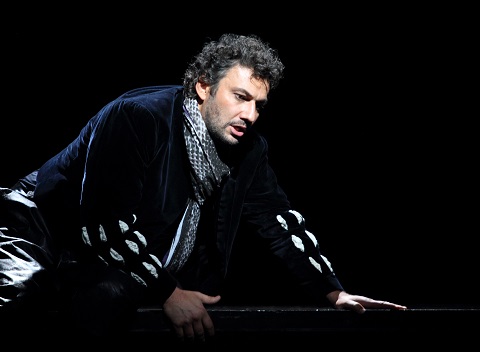 That said, it was undoubtedly Kaufmann whom the multi-national audience had
come to see. And, tackling the role for the first time, he did not
disappoint. Otello’s fairly low tessitura suits Kaufmann’s tenor which has
baritonal resonances and he was pretty fearless in approach, holding
nothing back vocally at the challenging peaks. Otello’s fears were
passionately exclaimed in ‘Ora e per sempre addio sante memorie’; in
contrast, ‘Dio mi potevi scagliar’ was distressingly meditative – often the
barest whisper conveyed wistful introspection – though perhaps lacking a
full palette of colour. Kaufmann’s Act 1 duet, ‘Gi‡ nella notte densa
s’estingue ogni clamor’, with Maria Agresta’s Desdemona was particularly
beautiful, though in general I wasn’t entirely convinced by the chemistry
between the doomed lovers; here, as they narrated the tale of their
courtship, their desires seemed aroused as much by their own vocal
mellifluousness as by their memories of romance and adventure.

Kaufmann’s Otello is no commanding hero, though. His ‘Esultate!’ is not a
thunderous entrance that would silence a storm; rather, this Otello
surfaces within the crowd, though the victor’s cry rings with bright
strength. Moreover, if he does not convey imposing ascendancy then neither
is Kaufmann’s Otello petulant, despite the fact that Boito has his ‘hero’
repeatedly burst into rage. Indeed, the brevity and orchestral power of our
introduction to Otello suggests that, in Verdi’s eyes at least, he is a
figure of more than simply military might and physical power.

Boito and Verdi have created not a ‘noble savage’ – whom Shakespeare’s
contemporaries might have considered overcome by his innate bestial
sensuality (and Kaufmann is not blacked up, which is unproblematic given
that Boito does not draw much attention to the Moor’s race and colour) –
but a man of solipsistic susceptibility, which Kaufmann’s quiet
anguish captures perfectly. His fragile pianissimos become an apt
representation of the linguistic fragmentation of the text’s ‘Othello
music’, as the grandiose imagery of ‘Olympus-high’ oceans ruptures into
stuttering banality – ‘ Pish! Noses, ears, and lips.’ Verdi cannot disrupt the beauty of the vocal line in the way that Shakespeare deconstructs the linguistic metre and syntax, and so, in this way, Kaufmann’s reticence becomes almost a rhetorical strategy. 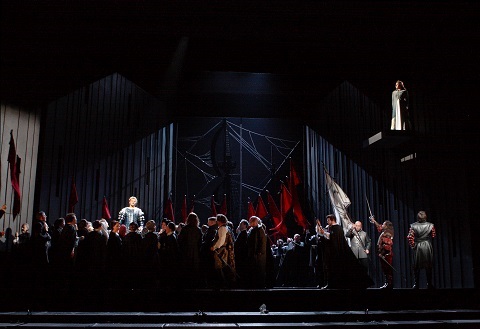 And, it is a strategy echoed in Boris Kudli?ka’s minimalist designs which
profess Warner to be more concerned with the internal than the external
workings of the drama. The walls of Kudli?ka’s ‘black box’ slide inwards,
their trellis-tracery allowing figures to eavesdrop furtively, while also
elegantly referencing Moorish filigree lanterns. We are presented with a
psychological chamber in which we seem to explore what Melanie Klein termed
‘projective identification’: that is, the projection onto others of
feelings that inspire suffering or thrill within a subject. If we view the
opera in this way (as Richard Rusbridger does in his article in the International Journal of Psychoanalysis , February 2013), Warner’s opening gesture identifies the storm with the
emotional turmoil in Iago’s mind, and not, as in Shakespeare’s play, the
ensuing breakdown of natural, civil and domestic order. 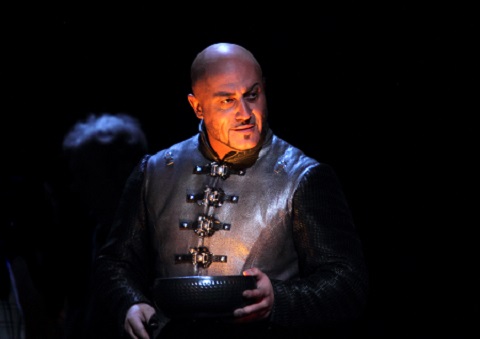 Indeed, Marco Vratogna’s Iago is undoubtedly hellbent on Hades. There is
nothing clandestine about his malignity, though I’d suggest that in fact a
little more serpentine slipperiness would not go amiss: after all, his
‘honesty’ as perceived by those around him, must be credible. Vratogna has
a strong upper register – such as can provide propelling drive in the
Brindisi – but his occasional hoarseness fittingly reminds us that Iago is
a rough soldier, whose coarseness may have inclined Otello to promote the
more urbane Cassio to be his lieutenant. That said, Vratogna’s
light-breathed insinuations floated into Othello’s ear with the elegance of
a lover’s discourse.

If Iago is ‘the Devil’, rejecting God in his Credo – ‘I believe that the
righteous man is a mocking actor both in his face and in his heart, that
all in him is a lie, tear, kiss, glance, sacrifice and honour’ – then
Desdemona is his antithesis, an angel of saintliness, whose innocence and
grace Iago is driven to violently expunge. There is little of Shakespeare’s
playfulness or feistiness in Boito’s characterisation. Maria Agresta, often
pushed to the hinterlands of the production, until the final scenes, sings
with a rhapsodic lustre and fullness of tone that perhaps betrays a
sensuality less than innocent, but her Willow Song and Ave Maria are
composed and restrained, an acceptance of the inevitable and a welcoming of
the hereafter. 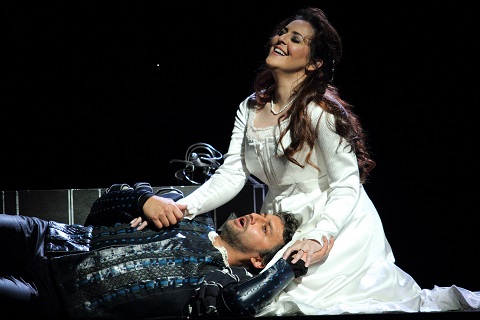 The rest of the cast are by no means ‘secondary’. FrÈdÈric Antoun’s Cassio
is elegantly persuasive but Iago’s duet with Cassio in Act 3 highlights the
latter’s narcissism and superficiality. Thomas Atkins’ Roderigo and Kai
R¸¸tel’s Emilia are finely drawn. A sense of Venetian grandeur is offered
by Sung Sim’s noble Lodovico and Simon Shibambu’s courtly Montano.

Pappano conjures blazing intensity from the ROH players. Not everything is
precise, but there is a visceral quality to both the orchestral and choral
climaxes which is countered by subtleties such as the string sonorities of
the Prelude to Act 3.

Warner’s vision does stumble at times: the arrival of the masted ship and
the extending of the high gangplank for Desdemona’s disembarking lack
refinement; the shattering of the winged lion seems cliched; and, perhaps
because there is a focus on the interior rather than the exterior, some of
the movement blocking, excepting the Chorus, is uninventive.

But, Iago’s greatest masterstroke is respected. He can literally turn white
into black: ‘So will I turn her virtue into pitch,/And out of her own goodness make the net/ That shall enmesh them all.’

And, so, in the final moments, the ‘black box’, inflamed by Bruno Poet’s
illumination, is made to contain a snow-white pearl – the white-upon-white
canvas of Desdemona’s doom. The sumptuous bed is, perhaps inevitably,
smeared with a painter’s flourish of red blood. This serves as a visual
emblem of the tragedy’s catalyst and its conclusion (but the neon ‘halo’ is
superfluous, surely?). For, it is the strawberry-spotted handkerchief which
is Iago’s prime tool of deception and it is this antique token of affection
which subsequently serves as an agent of truth, exposing his iniquity.
Thus, it is, paradoxically, a delicate symbol of overpowering destiny. As
Othello despairs, ‘Who can control his fate?’