Metteur en scËne Charles Roubaud is nearly synonymous with the OpÈra de Marseille, having initiated his opera career there in 1986 (an acclaimed Don Quichotte, seen in San Francisco in 1989). This Don Carlo is his 20th mise en scËne for Marseille.
Roubaud is a minimalist. Eschewing all metaphor he favors image. Thus in recent stagings he has made much use of video washes projected onto substantial, abstract architectural shapes. His stagings occur in abstract ambience rather than specific locale. For this Don Carlo he was joined by long term collaborators, Avignon based set designer Emmanuelle Favre and Marseille based costume designer Katia Duflot. The video designer was Virgile Koering (of Montpellier origins).
Roubaud is also a conceptualist, imagining Verdi’s auto de fÈ spectacle as a relatively intimate court encounter between father and son, overseen by church and state, courtiers were lined up as observers. Finally he imagined a video procession of Flemish youth marching to their martyrdom. Nothing more. 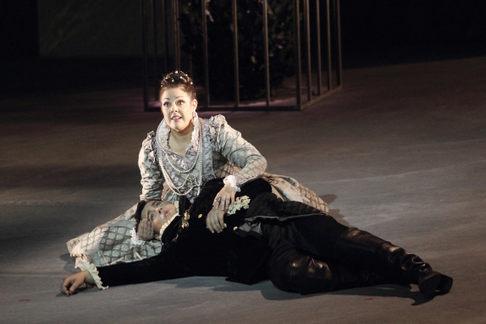 Yolanda Auyanet as Elisabetta, Teodor Llincal as Don Carlo
Based on intimacy and privacy such conceptual simplicity informed every scene. Don Carlo lay supine at the feet of Elisabetta for much of their fraught, post Fontainebleau encounter (this was the 4 act version). Eboli lay supine at the feet of Elisabetta to confess her betrayal. Every scene deployed its actors in abstract, emotionally charged positions, or abstract, strategically defined positioning rather than in active dramatic encounter.
Roubaud’s found Verdi’s theater not in Schiller’s drama, but in the expansion and implied collision of emotional worlds. Thus the theatrical climax fell onto the string of four huge arias that cap Verdi’s opera. Philip II’s Ella giammai, m’amÚ, Eboli’s “O don fatal,” Posa’s “Per me giunto Ë il di supreme, Elisabetta’s “Tu che le vanit‡ conosce” riveted us to the complexity and richness of existentially separate human worlds. Roubaud made Verdi’s theater not in dramatic encounter but in the discovery and definition of these coexisting worlds. 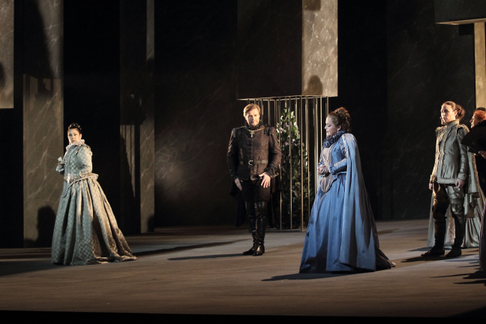 Yolanda Auyanet as Elisabetta, Jean-FranÁois Lapointe as Rodrigo, Sonia Ganassi as Eboli, Carine Sechaye as Tebaldo
This concentration was only possible with the complicity of the pit. Conductor Lawrence Foster found Verdi’s empathy with his tormented souls, and allowed it to expand and elaborate without boundary. Dramatic moments were indeed pointed, but only to extend possibility of amplitude and expansion of the existential moment.
With such an operatic poetic occurring simultaneously on the stage and in the pit the historical veracity of Verdi’s actors was far less significant than the actors abilities to live the moment. And that they did without exception. If bass Nicolas Courjal is too young to be an actual Philip II, he is vocally able to find an immediacy of plight with an energy and passion that were not resignation. His was the presence and the urgency of character that declared Philip II the central force of Verdi’s opera, not its tired victim.
Jean-FranÁois Lapointe brought unusual intelligence to Marquis de Posa with a maturity of male vitality, purity of resolve and duplicity, establishing himself as the moral equal of Philip II in beautiful, powerful voice. Italian mezzo Sonia Ganassi as Eboli unleashed sophisticated, mature vocalism and Rossinian confidence (plus solid, secure high notes) to make Eboli grovel magnificently in self pity. Spanish soprano Yolanda Auyanet’s Elisabetta had the purity of voice to project marital, maternal and filial innocence and the power of character and voice to explode in her confusion.
Physically and vocally robust, Romanian tenor Teodor Ilincai established a full voiced and straight forward confidence for history’s troubled young prince. And he was well able to appropriately soften and manipulate his tone as needed, This solid Don Carlo was the powerful catalyst for Elisabetta, Eboli, Rodrigo and Philip II to achieve the epitome of great lyric theater — a seemingly infinite state of simultaneous, suspended realities.
Immobile, directly in front of a huge white light cross bass Woytek Smilek’s Grand Inquisitor assumed terrifying terrestrial authority, A 2014 Operalia winner, soprano AnaÔs Constans promised celestial peace for his victims in truly heavenly voice.
Michael Milenski