The metteur en scËne of this Pinocchio telling was JoÎl Pommerat, a 54 year-old French theatrical thinker who says he is an auteur de spectacle. When Mr. Pommerat turned 40 years-old he made a pact with a group of actors to create a show each year for 40 years. Thus he has a lot of experience creating shows and intends to create a lot more.
He authored a Pinocchio in 2008. But it was hardly on the scale of grand opera on the stage of one of the world’s important festivals of lyric theater. This 2017 Aix Pinocchio is big, great big and truly magnificent. It is grand opera complete with a ballet!
Mr. Pommerat writes shows about the world he and we live in — the “we” limited in no small way to a fairly rarefied world of the French avant-garde. Thus it was to that world that the mostly French audience of this international festival ascended. It is a perch that makes an intellectual, or theatrical game of animating fancy theatrical and musical genre with low-life characters, values, aspirations and situations. But not without intervention from much higher forms of life and art. Like Mr. Pommerat’s thÈ‚tre. Like la grande musique classique (oft referred to in Mr. Pommerat’s libretto). 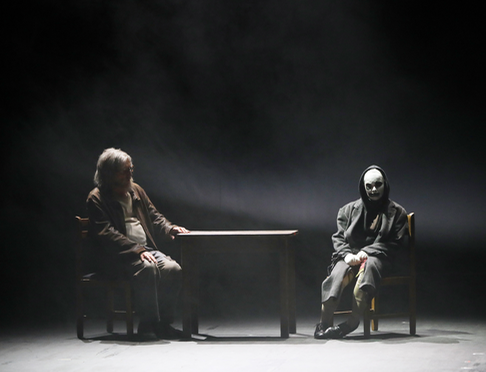 Vincent Le Texier as Pinocchio’s father, ChloÈ Briot as Pinocchio
Pinocchio was an ideal subject to inspire Pommerat’s substantial operatic theatrics! Maybe here is where the actual music of the evening might be mentioned. The sound world accompanying Mr. Pommerat’s show was created by French composer Philippe Boesmans. This fine composer gamely built the complex world of Mr. Pommerat’s theatrical quotes of expressionism, cabaret, circus, fairyland, etc., and, yes, opera too.
Mr. Boesmans took a bow at the end of the show, sadly missing from the opening night accolades to the stage was Mr. Pommerat himself.
The music was always attractive, as was of course Mr. Pommerat’s show, the most lovable moments when the basic musical recitation of text burst into arioso — brief, even sometimes not so brief melodic flights that invited us to partake of moments of emotional release in pure operatic bel canto!
And, yes, the ballet — that was scene 16 (of 24), about the place of the traditional grand opera fourth act ballet. A group of ragamuffins were called onto the stage to seemingly rap dance to the howling klezmer band (an accordion, saxophone and violin who were in fact on-stage much of the evening, chiming in charmingly in all sorts of occasions). 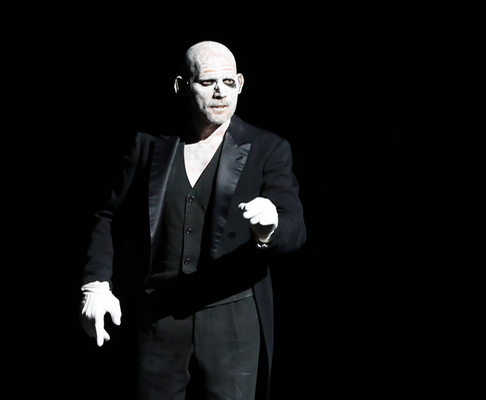 StÈphane Degout as the Director of the Troop (narrator)
All of Collodi’s Pinocchio was essentially present, but reclothed, most importantly with a narrator (the director of a theatrical troop that completed Mr. Pommerat’s larger metaphor) who made the transition from Collodi’s narrative text to Mr. Pommerat’s theatrical text. This role was superbly delivered by French baritone StÈphane Degout who kept us spellbound whenever the narrator took over or morphed into the circus director. His spoken French was brilliantly clear, as was his sung French to the degree that it was not included in the supertitles.
Pinocchio himself (herself) was diminutive French soprano ChloÈ Briot, supple of voice and of body (an incredible running leap up onto a table). She created a real Pinocchio, that is she found the brashness, the brattiness, the intelligence, the soft spots and finally the dignity of the brat becoming a real boy on his way to a classical music concert. A superb performance.
As usual at the Aix Festival casting was exemplary, mastery of vocal technique a given, appropriate colors of voice in place, physique and personality of actor in harmony with character.
Argentine/Italian conductor Emilio Pomarico presided over 19 players of the Klangforum Wein who easily made the magical sounds of the fairy world alongside the brash out-of-tune trumpets of composer Boesmans’ musical dada.
Transforming metteur en scËne Pommerat’s textural and dramatic world into a magical theatrical world was his long time collaborator set designer/lighting designer …ric Soyer who was joined by video designer Renaud Rubiano. The visual language is minimalism, the colors black and white, light and dark, stark and bright. The effects were huge, the moments were precise, the video seamlessly integrated to deploy massive, epic images. It was everything you expect from the minimal means of studio theater magnified with taste and intelligence to technically complex grand opera proportions.
Yet it was a long evening. Maybe you had to be French.
Michael Milenski