And, fittingly so. For, in 1900, eight years after Leoncavallo had drawn
back the curtain on the tawdrier side of theatre life in Pagliacci
, and at the time when audiences were lapping up the self-sacrifice of
Tosca – a well-known singer, adored by her public, redeemed by the beauty
of her voice from a life of poverty or religious devotion – Zaz‡ confirms the contemporary fascination (on-going?) with
back-stage lives which combined luxury and glamour with lurid domestic
soap-opera.

Indeed, the parade of performers with which Lambert opens the opera –
stage-hands, Pierrots, cloaked magicians, drag artists, tutu-ed ballerinas,
cabaret divas, acrobats, aerial artistes, a theatre troupe decked in full
Renaissance garb – have their verismo roots in the itinerant
comedians of Pagliacci, the traveling performers of Mascagni’sIris, and the professional actors in CilËa’s Adriana Lecouvreur.

Lambert makes clear that this is an all-singing/all-dancing,
show-must-go-on world, whose glitzy frontage is stained by a grittier
reality. Ironically, it was a world with which Leoncavallo himself would
later become familiar as, to supplement the royalties from Pagliacci, in his later years the composer toured Europe and North
America, conducting condensed versions of his own opera. When he arrived in
London in September 1911, a music-hall arrangement Pagliacci at
the Hippodrome was announced as ‘The Sensation of the Century’: ‘Signor
Leoncavallo’s appearance in person to conduct his own condensed version of
his own Pagliacci, and bringing his own company with him, is an
event of a unique character in the history of variety theatres.’ A media
circus, indeed.

in 2015, I remarked that, ‘Perhaps a fully staged production is necessary
to do justice to Zaz‡’s melodramatic excesses’. (My review
contained a stage history and synopsis, to which readers might be
directed.) 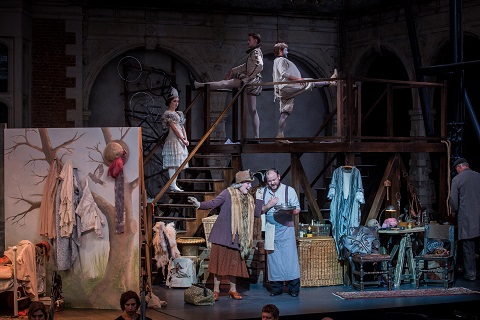 Lambert certainly holds nothing back scenographically in the first Act,
making use of the whole span of the OHP stage to offer us a revue
performance (-within the performance), a stage-crew at their labours, a
working-class cafÈ-chantant, Zaz‡’s
dressing-room-cum-bedroom, and an external staircase and platform where
thespians and dancers gather to practise their art.

If that sounds a lot to take in, it is. I appreciate that it’s a milieu that we are intended to absorb, not a landscape whose every
detail we should laboriously note; but, it seems a pity when dancers are
practising at the barre, or show-girls are fanning bubbles, or Long John
Silver is strutting his stuff, to ignore these details. Particularly so
when central and peripheral events intertwine: when the protagonists’ music
provides the rhythm and form for those performing in the stage’s marginal
arenas; or where Zaz‡’s seductive flirtations are mirrored by erotic
couplings at the fringe. But, without mimicking a Centre Court audience
watching a thrilling rally swing back and forth, it’s impossible to take in
and link up everything, and ultimately the hyperactivity – all wonderfully
detailed and authentic – distracts from the central focus.

Act 2 puts the spotlight on Zaz‡’s dressing-room itself, all powder puffs,
pillows and strewn underwear, while Act 3 transports us to the caddish
Dufresne’s Parisian dwelling, which the family are preparing to leave.
Trunks and cases are piled high, making the apartment appropriately
spiritless but also making a nonsense of some of the text: as when Dufresne
complains that his little desk, like his heart, is covered with clutter,
when there isn’t a bureau in sight as all the furniture is swathed in white
sheets. But, the bareness effectively complements the tightening of the
dramatic intensity and focus in this Act.

Anne Sophie Duprels excels in the title role, demonstrating a dramatic
range that matches her vocal commitment. Geraldine Farrar, the Met’s
biggest star in 1920, and for whom the company staged Zaz‡, said
that the role depended ‘altogether on the true, convincing interpretation
of the heroine by the singer … The singer who can make her audience feel
that the emotions she is portraying are real, can make the figure live in
voice and action, must always carry the part to success.’ (cited in
Frederick H. Martens, The Art of the Prima Donna and Concert Singer). And, Duprels
certainly lived up to this high threshold. 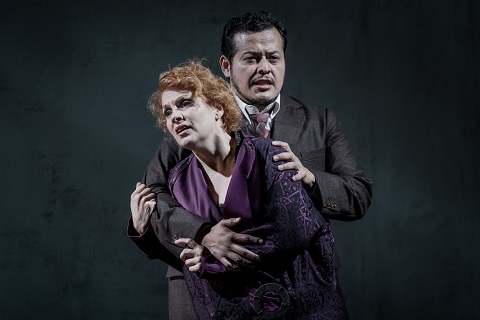 The ‘heroine’ does not have formal arias as such, rather long musical
monologues that hit peaks of passion and pique though which Duprels swelled
gloriously. She has warmth in the middle range, and if occasionally her
soprano becomes a little harsh as the voice climbs, the singer makes
Leoncavallo’s somewhat indistinctive melodies speak. They take on a
declamatory quality in the sense of an on-going conversation: Zaz‡’s voice
will be heard – indeed, it is only quietened by the ‘angelic’ calm of
Defresne’s daughter TotÚ, charmingly played by Aida Ippolito, whose spoken
words alternate with Zaz‡’s plaintive sung reflections on the injustice of
life and recognition that she must give up hopes of a future with Dufresne.

Duprels captured all of Zaz‡’s precariousness – her brassiness, her wit,
her volatility, her vulnerability – and did not allow the drama to lapse
into melodramatic sentimentality. In fact, she seemed at times to emphasise
Zaz‡’s self-preserving flintiness. She smeared on red lipstick as she
dismissively reminded her inebriate mother – whose idiosyncrasies were
richly mined by Louise Winter – that living by the matriarch’s rules led to
ruinous poverty, an accusation rendered sharper by Anaide’s obvious concern
for her daughter, as she picked up her stockings from the floor and laid
them carefully on the bed.

There was humour too, though, as Zaz‡ donned Br¸nnhilde’s helmet to
‘rescue’ the furious peg-legged pirate she’d left stranded on stage, when
missing her cue as Dufresne swept her off her feet. Duprels also conveyed a
strong relationship with her long-suffering dresser, Natalya, a role sung
with sensitivity and acted with nuance by Ellie Edmonds. Edmonds conveyed
Natalya’s genuine love for her mistress, just as Duprels’ dependence on her
employee-friend was plain to see. 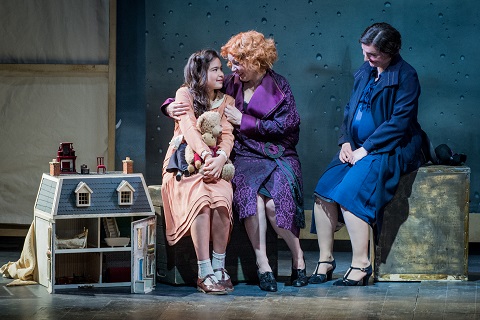 Some of the best singing of the night came from Richard Burkhard’s Cascart;
‘Zaza, piccola zingara’ was tender, firm of tone and carefully phrased. If
only Zaz‡ had heard the loyalty and affection in her former lover’s voice
then she might have heeded his warnings and spared herself suffering … 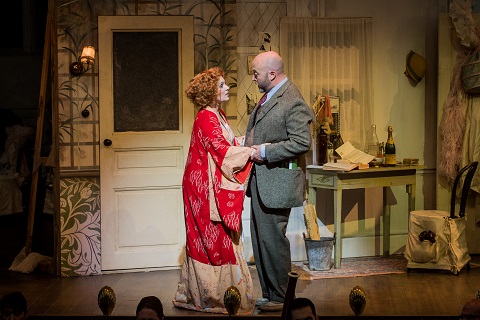 As Zaz‡’s weak-willed, selfish deceiver, Milio Dufresne, Joel Montero
seemed out of sorts. Though he produced a stirring tone at times, there
were a lot of rough edges and the intonation was hit-and-miss and wavering.

Peter Robinson and the City of London Sinfonia made much of the brash
colours and popular-song rhythms of Act 1, and brought out the more nuanced
instrumental detail of the latter acts. This was disciplined, stylish
playing.

When Farrar – who had a large following of idolising young women, nicknamed
‘Gerry-flappers’ – bid farewell to the stage in the title role of
Leoncavallo’s opera, she was festooned with balloons and flowers, hailed
with banners, ‘Hurrah, Farrar! Farrar Hurrah!’, eulogised in speeches of
devotion, and paraded up Broadway in an open top car (as reported in Music Journal, October 1965).