Polish pianist and composer AndrÈ Tchaikowsky, born in November 1935, had
experienced the ghettos of Warsaw as a child; he was also a homosexual. One
imagines that the discriminatory divisions and brutal biases of The Merchant of Venice struck a personal chord; that,
paradoxically, he empathised with both the experience of the despised
Jewish moneylender, Shylock, and with the latter’s nemesis, the refined
Venetian, Antonio, whose melancholy has oft been accredited to his
frustrated homosexual love for Bassanio – a love which other Venetians in
the play mock: ‘You look not well, signor Antonio’, smirks the garrulous
Gratiano. 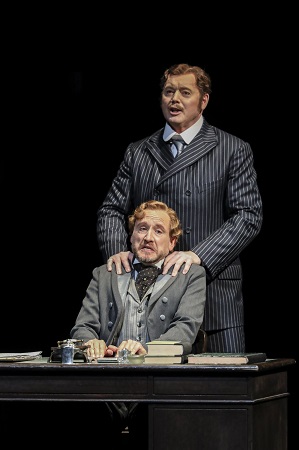 Tchaikowsky’s opera was completed in 1978. He offered it to ENO, when the
company was under Lord Harewood’s directorship and David Pountney was
artistic director, but in 1982 it was rejected and Tchaikowsky, seriously
ill with cancer, died shortly afterwards at the age of 46. It remained
unperformed until Pountney, by then artistic director of the Bregenz
Festival in Austria, commissioned performances, directed by Keith Warner,
for the 2013 festival. WNO’s performances of this production in Cardiff in
September last year brought the opera to the UK for the first time.

In Shakespeare’s day, Venice was considered an eclectic model of democratic
republicanism, international trade, maritime prowess, Renaissance art and,
as in Ben Jonson’s Volpone, corruption and vice. But, Shakespeare
largely ignores these stereotypes and focuses on the city’s cultural
divisions and conflicts (a pattern repeated in Othello). The ‘City
of Love’, he suggests, is intoxicated by hatred. 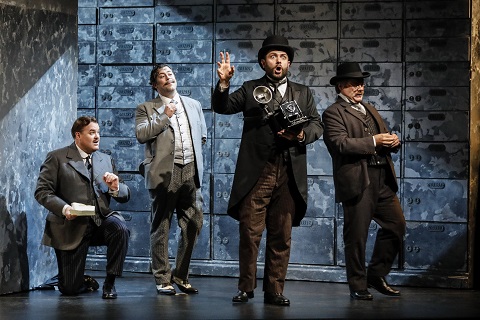 Keith Warner’s production emphasises not just the prevailing persecution
and prejudice but also the motives which fuel them: in this case,
mercantile ruthlessness and envy. Ashley Martin-Davis’ handsome designs
take us to the underbelly of Venice’s leisured glamour: its bank vaults.
There are none of the magnificent ‘argosies with portly sail’ – emblems of
the trading wealth that paid for the city’s opulent piazzas, buildings and
art – that dominate the conversation at the start of Shakespeare’s play.
Venice’s commerce depended upon the finance made available by Jewish
usurers, and so the Jews were ‘tolerated’ not out of humanitarianism but
because of mercantile necessity.

Warner and Martin-Davis take us directly into the city’s counting houses:
sturdy strong-boxes form the very fabric of Shylock’s house. The set’s
mobile walls rotate slickly, spinning us through a world of ceaseless
commercial transaction. The action is updated to the Edwardian era – a
period during which the cosmopolitan Jewish elite, from the highest
echelons of the likes of the Rothschilds to the middle-class financiers,
seemed largely integrated into London society, until the start of WW1
released previously repressed hostility. Warner and Martin-Davis thus
ignore the gondoliers and visual riches of the Rialto, just as
Shakespeare’s The Merchant of Venice ignores the local colour and
opulence, to focus on the Venetians’ self-justifying persecution of the
stereotyped ‘alien’.

John O’Brien’s libretto largely follows Shakespeare’s plot and imports much
text – too much? – verbatim. There are some unexpected omissions, though.
The absence of Bassanio’s description of Portia – ‘a lady richly left;/ And
she is fair, and, fairer than that word,/ Of wondrous virtues: sometimes
from her eyes/ I did receive fair speechless messages’ – with its
alliterative dreaminess, deprives the spendthrift’s request for a loan of
its romantic validation: after all, he is asking his homosexual admirer for
money that the latter does not have so that he can pursue his female
beloved. Then, when Shylock commands Jessica to lock the doors of his house
in his absence, the usurer’s detestation of music – of the ‘vile squealing
pf the wry-necked fife’, the ‘shallow foppery’ that shall not enter his
‘sober house’ – is excised; it seems strange to omit an opportunity to exploit the text for
characterisation, given the operatic context – after all, Shakespeare’s
villains are never lovers of music. But, then, I suppose something has to
go.

Tchaikowsky employs a lyrical vocal idiom which often has much grace – as
in Portia’s ‘quality of mercy’ monologue – and rhetorical impact, as in
Shylock’s vociferous self-vindication, ‘I am a Jew. Hath not a Jew eyes?’,
which is moved, with dramatic effectiveness, from the Act 3 street scene in
which Shylock spits his exculpation at Solanio and Salarino to the
court-room denouement, where his audience is the Venetian state itself.
But, the arioso lines often drift and overall the opera feels too
wordy. One wishes that O’Brien had been more adventurous, re-ordering and
revising in order to create ‘anew’, in the manner of a Boito, as there is a
danger that the music becomes simply illustration – an enabling medium for
the presentation of the play, rather than a work in its own right. Even
Britten’s A Midsummer Night’s Dream – which was similarly faithful
to the original, adding just one line of ‘explanatory’ text (‘compelling thee to marry with Demetrius’) and
in which the lovers’ music can suffer from the same plaint – has the
unsettling eeriness of Oberon’s countertenor magic, the elevation of
‘Bottom’s Dream’ and, not least, the wonders of Britten’s score to suggest
new meanings.

Musically, here, there is a predominant debt to Berg and, while not
particularly memorable, the score serves the tenser dramatic moments
adequately. However, the languorous lyricism of Belmont evades Tchaikowsky.
Both Lorenzo’s final-act eulogy to music and the entire second Act – which
feels like an extended scherzo, in which the divertissements are
supplemented by an on-stage (here, side-box) Renaissance consort of two
recorders, oboe d’amore, oboe da caccia, two bassoons, lute, tabor and
harpsichord – lack the requisite ‘poetry’. 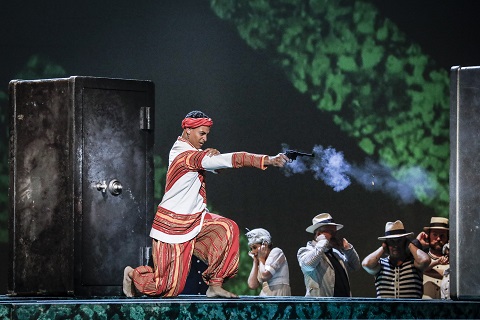 Warner offers a contrast to the dark Venetian drama of the opening act and
stages the Act 2 Belmont scenes within a box-hedge maze, a bird’s-eye view
of which is artfully relayed on a video back-drop. The easy luxury, sense
of sexual freedom (at one point Portia pins Nerissa down in what seems a
lesbian embrace), frequent interpolation of musical allusion and set-piece
(‘Tell Me Where Is Fancy Bred?’ is delivered by a Dietrich-style diva in
white top hat and tails) and the maze itself, put me in mind of Kenneth
Branagh’s 1993 film of Much Ado About Nothing. But, the flippancy
feels excessive: the caskets are held in three cumbersome safes, reminding
us of the ugly, mercenary motivation behind the suitors’ quests, but the
riddle scenes are hyperbolic – the gun-toting Moroccan prince leaps
acrobatically and resorts to an outsize detonator to gain entry into the
gold casket – and disproportionate, disrupting the dramatic flow.

Lionel Friend conducts with attentiveness to the details of the score – the
orchestra is large – and does a good job at keeping stage and pit in
balance and coordination. The instrumental interlude following the
court-room scene was beautifully played, a poignant representation of
Shylock’s defeat and, Warner suggests, death: for Shylock seems to succumb
fatally to his shame and humiliation, his ghost rising during the moonlit
meeting of Lorenzo and Jessica, to haunt his daughter’s betrothment and
betrayal.

African American baritone Lester Lynch is cast as Shylock, his race adding
to the alienation signalled by his gabardine and skull-cap amid the
prevailing Edwardian urbanity. Lynch’s voice glows with pride and hatred,
while the contortions of the tuba, bass clarinet and counter-bassoon convey
his self-destructive bitterness. There seems little to redeem him: in the
trial scene, he pulls on his rubber gloves like an amateur surgeon, eager
for his ‘pound of flesh’, deaf to the warnings of the Duke of Venice –
nobly sung by MiklÛs SebestyÈn – that ‘victory’ will bring Shylock only
vilification.

Lauren Michelle’s Jessica may toss her father’s treasure chests through the
casements with overly enthusiastic gusto into the sheets held below by
Lorenzo’s Christian friends, but she must fight her own battles to overcome
prejudice. Michelle coped well with the high melismatic lines which,
crystalline, rose above the scornful reception she meets at Belmont and
deepened our sympathy still further.

Sarah Castle was superb as Portia. Her strong diction allowed Portia’s
words to penetrate to the back of the stalls, giving the feisty
proto-feminist further stature, while her phrasing was stylish. Its
elegance was equalled by Mark Le Brocq whose high-lying lines conveyed all
of Bassanio’s levity and heedlessness. Verena Gunz’s animated Nerissa and
David Stout’s tactless Gratiano made a well-matched pair. Only Martin
Wˆlffel disappointed: Tchaikowsky’s decision to cast Antonio as a
counter-tenor (presumably to emphasise his homosexuality – Antonio
surprises Bassanio with an impetuous kiss when the latter embarks for
Belmont to woo Portia) may be questionable, but by any measure Wˆlffel
lacked power and definition, and the English text was indistinguishable. 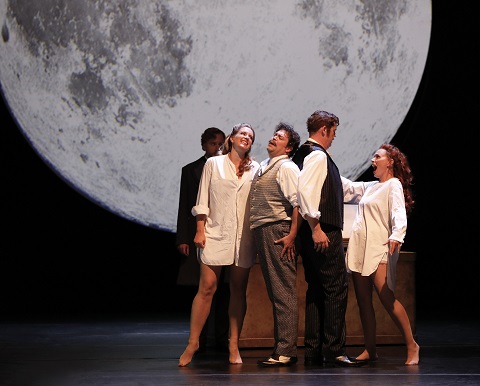 Warner’s production opens and closes with an image of Antonio on the
psychiatrist’s couch. The final gesture – Antonio hurls an object at
Shylock’s ghost, silhouetted against the moon – is presumably designed to
suggest that the therapy isn’t working, unable to overcome the depth and perpetuation of
hatred, but if so it seems redundant. More importantly, it subverts or at
least alters the balance of the ending of Shakespeare’s romantic comedy, in
which love and loyalty defeat malice and cruelty. That said, Warner does
consistently emphasise the darker aspects of Shakespeare’s tale and at the
close of this production the scales of justice are still crookedly weighted
with intolerance and bigotry.

The Merchant of Venice


Co-production of the Bregenzer Festspiele, Austria, the Adam Mickiewicz
Institute as part of the Polska Music programme & Teatr Wielki, Warsaw/