Among the accomplishments of the Gockley era was music director Nicola Luisotti’s refinement of the San Francisco Opera Orchestra. And perhaps in no other opera can the glories of this superb orchestra shine forth more brilliantly than in Elektra, the Strauss score demanding myriads of colors and masses of volumes to tell its very ugly story.
It is very beautiful music, but unlike bel canto that can tell ugly stories too, Strauss modernism finds its beauty in sonically colorful hues that intensify the human spirit in its most dreadful conflicts (bel canto revels in the voices it uses to overpower conflict). All this Strauss orchestral magnificence was indeed present for this Elektra!
On stage was British stage director Keith Warner’s staging, a co-production with Prague’s National Theatre where the production debuted last year, and with the Karlsruhe (Germany) opera. It is a rarity these days to find a high concept European-style production on the War Memorial stage. 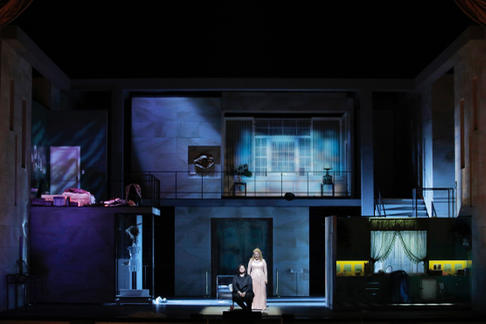 Museum with interpolated bedroom, living room and kitchen of surrogate family
Director Warner set up his concept in the a vista (open-to-view) stage while the audience was finding its way to its seats and reading the program booklet. Those of us who didn’t pay much attention to the open stage and to what we assumed was an over-used Brechtian convention (meaninglessly used in the 2009 Salome as example) had some catching up to do once the opera started. We had no idea that the evening had begun before it began.
But we correctly assumed that the girl dressed all in black was Elektra. Little by little it became clear that the setting was not just a museum but actually an antiquities museum, and the girl dressed in black was going to relive a domestic drama (mother kills the girl’s father), its actors confused between ghosts of antiquity and the actual members of a modern family.
Thus it became a sort of soap-opera docudrama of the Strauss opera that we either enjoyed sorting out, most evidently did, or we did not (I didn’t). Director Warner was so involved creating his concept in a myriad of detail that the idÈes fixes — the obsessions — of Elektra, Klytemnestra, and Orest simply evaporated into his orgy of storytelling.
In fact Mr. Warner’s Elektra re-creation was so vividly explained that for me it overpowered the splendors emanating from the pit and eviscerated the opera’s usual punch.
The Elektra bar has been set really high in recent productions around the world. San Francisco Opera’s Elektra, American soprano Christine Goerke, kept pace. She is in prime form vocally, and showed herself well capable of withstanding Elektra’s extended vocal tortures with appealing musicianship. If from time to time you wished for a bigger sound you got it when Strauss demanded it. On stage she gamely and convincingly fulfilled director Warner’s idea of a family’s black sheep child in dramatic soprano wolf’s clothing.
Canadian soprano Adrianne Pieczonka is the world’s reigning Chrysothemis. Her voice was of innocent sweetness until she became overwhelmed with Elektra’s demands and then it soared proudly over the hugest orchestral climaxes. She too convincingly and unflinchingly embodied director Warner’s character, complete with little girl mannerisms while hugging her teddy bear. 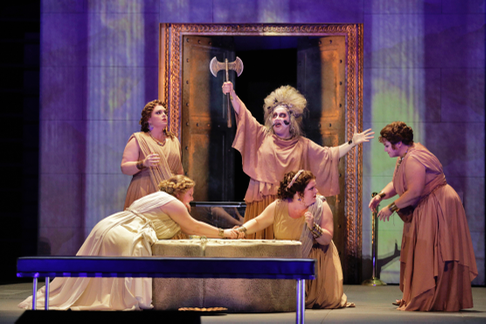 The five Maidservants
The five maidservants of the opera’s beginning were splendidly sung once they were allowed on stage (initially they were off-stage, their sound uncomfortably muffled, so that director Warner could make his point that the ghosts of the museum were to come alive).
The balance of the cast was a mixed bag. Stephanie Blithe was to have been the Klytemnestra but she cancelled. Her replacement, Michaela Martens was over-parted in the company of Mmes. Goerke and Pieczonka, as were the Orest of Alfred Walker and the Aegisth of Robert Brubaker.
Young Hungarian conductor Henrik N·n·si gave convincing body to the Strauss orchestral score. Note that Mr. Warner’s staging was effected in San Francisco by Anja K¸hnhold of the Badisches Staatstheater Karlsruhe.
Michael Milenski