A stunning “Ou va la jeune hindou”! (Bell song) from Delibes LakmÈ. Devielhe’s agile coloratura negotiates the challenges so gracefully that they seem almost effortless, flowing as fluidly as molten silver. The decorations sparkle – like bells – evoking emotions an innocent virgin cannot otherwise articulate. Lines float with a legato which seems inexhaustible, and dance with sensual rhythm. The natural freshness in Devieilhe’s voice evokes LakmÈ’s purity without artifice. If Devieilhe is still quite young, that adds tender fragility to her portrayal. Listen also to the way the orchestra replicates exotic “oriental” sounds with western instruments. Les SiËcles’ background in period-inspired performance pays off handsomely. Also included here are a good “Viens, Malika” (with Marianne Crebassa) and “Tu m’as donnÈ le plus doux rÍve”.
“Celle qui vient est plus belle” from Massenet ThaÔs, and “!A vos jeux, mes amis” from Ambroise Thomas’s Hamlet, indicating whee Devieilhe’s career will develop. Berlioz La Mort d’OphÈlie , Debussy La Romance d’Ariel and Charles Koechlin’s Le Voyage show she’s also promising in song, where Devieilhe is accompanied by Alexandre Tharaud. But there are other treasures, too. One of the many reasons why Roth and Les SiËcles are so extraordinary is because they know their music history and make intelligent, perceptive connections. Thus they present, together, “La jour sous le soleil bÈni” from Messager’s Madame Chrysanth?me, a French Madama Butterfly with “Mes longs cheveaux descendent” from Debussy PellÈas et MÈlisande, a thoughtful juxtaposition which brings out the contrast between two almost contemporary pieces. 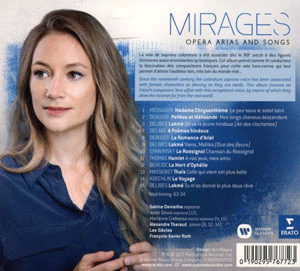 Still further reason to get this recording is that it includes Maurice Delage’s Quatre Po?mes hindous. Delage (1879-1961) travelled to India, Indo-China and Japan, absorbing non-western musical form. Although there are several recordings of these songs, most aren’t easy to come by except for Felicity Lott/Armin Jordan from 1995, so it’s refreshing to hear Devieilhe with Roth and Les SiËcles who are even more idiomatic than Jordan and the Kammerensemble de Paris. What gives this performance the edge is the orchestral playing. Les SiËcles, with their extensive experience in Ravel and in unusual instruments, create the exotic sounds of the East of Delage’s imagination so well that the songs have an almost authentic “Indian” flavour, even the one titled Lahore which is in fact a setting of Heinrich Heine’s Ein Fichtenbaum steht einsam, also set by Grieg, Liszt, Delius and Stenhammer. In Delage’s setting, cello, viola and harp are plucked like Indian string instruments, while the voice curls sensuously around. In the song BÈnarËs, we might think we hear tablas and Indian reeds, but we’re actually hearing western instruments played by musicians who have endeavoured to understand what their Asian counterparts might do. When western composers discovered Asia, they opened new possibilities in western form. From The East to Debussy, to Stravinsky (whose Le Rossignol is also on this disc. Modern and ancient, in symbiosis. With Roth and Les SiËcles: “The unexpected is always with us”, to borrow a phrase from Luciano Berio, another Roth speciality.
Anne Ozorio