Norwegian stage director Stefan Herheim and the OpÈra de Lyon pulled out all the stops to create the biggest, most complicated Cenerentola you may ever encounter. Immensely gifted set designer Daniel Unger, with Mr. Herheim, offered a perspective of six superposed classical proscenium arches. Each leg revolved to become a street of working class row houses in forced perspective, each house with a chimney belching smoke. Immensely gifted video artists Torge Mˆller and Momme Hinrichs created the fairytale palace that appeared in many digital guises, and magical rainbows of flowers and gears as well.
Herheim, a quite respected and credentialed metteur en scËne, began (and ended) with a contemporary janitor’s cart and a cleaning lady on a blank stage. A book fell from the lofts, she picked it up and read, a Baroque cloud descended, Giacomo Rossini emerged. Five elaborately costumed (18th century) actors frolicked onto the stage, the cleaning lady climbed into a fireplace that had magically descended, and emerged as a smoke smudged Cinderella. That was the overture.
There was no let up for the next 3 hours.
When astonishing scenic magic was not occurring a show curtain swooped down for the principals to frolic in front of. The hard selling comedians of the overture in their highly elaborated costumes executed highly exaggerated shtick. It was visually deafening.†
Cinderella herself exposed some unusual bratty traits.
In Mr, Herheim’s avalanche of scenic gimmicks and fast and loud comic shtick, there were actually a few slightly amusing moments. The second act curtain rose revealing the conductor lounging on the stage smoking a joint, Tisbe and Clorinda had to order him into the pit. Dandini dropped his pants, broke off a piece of the stage lip and kicked it into the pit and then unceremoniously (his pants around this ankles) pushed the janitor’s-cart-now-royal-carriage off this stage. The best however was the enactment of the storm, the principals became the stagehands who would have created the scenic effects back when such effects were mechanical and hand operated.
All in all Mr. Herheim’s Cenerentola was a tsunami of mostly unrelated conceits.The real Cinderella of the evening was finally Rossini himself, sequestered irrevocably into the kitchen of tricks dreamed up by vainglorious regietheater. 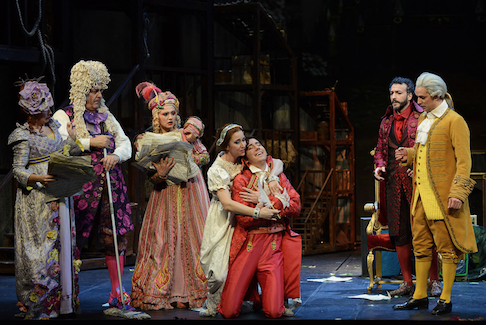 (left to right) Katherine Aitken as Tisbe, Renato Girolami as Don Magnifico, Clara Meloni as Clorinda, MichËle Losier as la Cenerentola, Cyrille Dubois as Don Ramiro, Simone Alberghini as Alidoro, Nikolay Borchev as Dandini
A fine cast was sacrificed to the production. The singers gamely pulled off all the hard-sell antics, remaining always the stock vaudeville comedians they were supposed to be, their loud antics never betraying that they were accomplished musicians. A Golden Carriage ending might have been a dynamite “Non piu mesta.” As it was French mezzo MichËle Losier did not have the vocal clarity, point and bite to make the opera’s finale into the showpiece it is meant to be.
The scope of this Opera de Lyon / Oslo Opera production was evidently to show off the talents of Mr, Herheim and his team. This it most certainly did.
Stendal back in 1823 noted that the Trieste public found the production splendid. So did the Lyon public, evidenced by the opening night ovation.
Michael Milenski