The Rare Book and Manuscript collection of Middle Temple Library contains
seventy-two volumes from the personal library of poet and priest John
Donne, and so Benjamin Britten’s setting of Donne’s Holy Sonnets
seemed a fitting inclusion in this programme. These Petrarchan sonnets,
written between 1609-18, express the poet’s – and his age’s – perplexity
with the nature of the soul and its relationship to the body: the octet
presents the ‘argument’ which is then meditated upon in the concluding
sestet (it was a pity that this form was distorted in the programme). What
better mirror can there be of the way that Donne’s impassioned enquiry is
given controlled formal expression than human song? Music, most especially
the sung voice, is surely an embodiment of Donne’s conception of the union,
and mutual necessity, of body and soul.

It’s no surprise that Britten was drawn to Donne’s poetry in August 1945.
It was a time when he was exploring the music of Purcell, and developing
his approach to setting English texts. And, with the war in Europe only
just over, Donne’s meditations on death and loss must have reflected the
prevailing emotional bleakness, brittleness and bitterness; Britten had
himself just returned from a tour of German concentration camps with the
violinist Yehudi Menuhin. Perhaps, too, the composer, as a homosexual and
conscientious objector, identified with the self-examination and emotional
wrangling of the young Donne, whose decision to reject Catholicism both
‘demonised’ him in the eyes of the Papists and threw him into poverty.

Donne’s reflections on ‘That subtle knot which makes us man’, (‘The
Ecstasy’) and the cruel uncertainty of divine intervention reveal both the
human body and man’s spiritual disposition to be fickle: his exploratory
philosophical conceits are complex, sometimes obscure, presenting ideas
which challenge and disturb. Britten’s settings (he selected and re-ordered
nine of the sonnets) are similarly demanding: musically, technically and
emotionally.

The opening of the cycle is bleak and Bostridge’s fortissimo cry of
anguish, ‘Oh my blacke Soule!’, was fearless, despite the high pitch,
against the rhetorical might of Drake’s pounding low octaves which never
became purely mechanical despite their ferocity. Bostridge imbued Britten’s
chromatic vocal line with a piercing bitterness and anger, the torturous
twists conveying the protagonist’s rage at his ‘sicknesse’ – ‘deaths herald,
and champion’. But, there was a quieter torment in Donne’s frustrated
conclusion that grace both requires and is a requisite for repentance, and
here Bostridge blanched his voice to communicate the power of the poet’s
paradox that ‘being red’, Christ’s human blood dyes human souls to ‘white’
purity.

Sonnet XIV begins with a plea, ‘Batter my heart, three person’d God’, and
the relentless energy of the poem, with its predominance of monosyllabic
vowels, was captured in the perpetual motion of Bostridge’s vital,
pulsating vocal line – ‘breake, blowe, burn’ – and the piano’s drumming
staccato. In Sonnet XIX, Drake’s light whirling conjured the protagonist’s
vexation, which culminated in melismatic terror, ‘To morrow I quake with true feare of his rod’, the chasm in the vocal line
after ‘feare’ evoking the horror of the abyss. Drake himself literally
shuddered with each low, hammering thud of the ‘fantastique Ague’ of
Donne’s capricious devoutness.

But, alongside the angry dilemmas and disputations there was reflective
introspection too. In Sonnet III the piano seemed literally to sob ‘sighes
and teares’ and, after Donne’s desperate fear that he has ‘mourn’d in
vain’, Bostridge introduced a rueful relaxation into the vocal lament which
reflects on the frivolous waste of finite tears spilt for trivial reasons,
verbally relishing the richness of Donne’s self-castigating description of
the ‘hydoptique drunkard, and night-scouting thief/That itchy Lecher’.
There was stillness at the close of Sonnet XIII, ‘This beauteous forme
assures a piteous minde’, and in the octet of the following Sonnet XVII the
tenderness of Bostridge’s tenor captured the poet-speaker’s poignant
yearning for closeness to God following the early death of his wife, before
the piano’s rocking chords conjuring the sensual ‘wooing’ of a God
concerned that ‘the World, Fleshe, yea Devil’ will steal the poet’s
devotion.

The declamatory trumpeting of Sonnet VII, ‘At the round earths imagin’d
corners’, had compelling rhythmic heft but this bright confidence was
quelled by the irrefutable knowledge of man’s sin: Bostridge’s prayer for
pardon, ‘When we are there; here on this ground, Teach mee how to repent;’
was harrowingly honest and vulnerable. The musicians swept segue
into the penultimate sonnet, in which the poet-speaker’s acknowledgement of
reliance on God to help him refrain from temptation and sin was delivered
with commanding authority, culminating in a tumult followed by a
shattering silence: ‘And thou like Adamant draw mine iron heart.’

Donne’s succour that death is not the end, ‘Death, be not proud’, inspired
some beautifully easeful lyricism, but the poet’s representation of death’s
power as no greater than that of the ‘poppie, or charmes can make us sleepe
as well’ lacks conviction. And, despite the lulling ease of the triplets
(‘Thou are slave to Fate, Chance, kings’) and the light, dotted rhythms
(‘And does with poison, warre, and sicknesse dwell’), at the close
Bostridge’s fierce stare and deliberate placing of the final words – death
shall be no more; death thou shalt die’ – offered little consolation. The
piano’s passacaglia is unresolvable: Britten did indeed add an unpublished
‘Epilogue’ – a setting of text from Donne’s ‘Meditation XVII’ that includes
the lines ‘For whom the bell tolls’.

This was an astonishingly committed, physical, musical probing of Donne’s
pained philosophical agonising and poetic disputes by Bostridge. No wonder
he looked drained at the close: as if Donne’s dilemmas and despair that the
‘mysteries’ of the mind ‘in souls do grow,/But yet the body is [the] book’
(‘The Ecstasy’) were made corporeal.

At the time he was composing The Holy Sonnets, Britten
was also working on his realisation of Purcell’s The Queen’s Epicedium, which was composed in response to the death
of Queen Mary in December 1694 and which was the first vocal item in the
programme. Here, Bostridge’s rhetorical mannerisms were perhaps less
successful; I felt that – despite the gentle, lachrymose lilt of the
central air – Purcell’s essential lyricism was lacking, replaced by an
almost existential grief in the final of the three musical sections, where
the three-note descending motif, ‘heu!’ (alas), was a soul-consuming wail
of despair, the ‘h’ a heart-puncturing knife. William Croft’s ‘A Hymn on
Divine Musick’ was more fluid and affirmative, surging towards the vision
of transcendence, where ‘the Blest ascend the Seat where Hallelujah’s never
end’.

Pelham Humfrey’s ‘Lord, I have sinned’ and ‘A Hymn to God the Father’
followed. In the former, after the tormenting repetitions of the opening line
and the underscoring of the speaker’s terror by the lucidity of the piano’s
textures, there was some small solace in the tierce de Picardie of
the close: ‘Teach but my Heart and Eyes/To Melt away,/And the one Drop of
Balsam will suffice.’ And, Bostridge’s tenor paced with evenness and
equanimity through the melodic arcs of Humfrey’s setting of Donne’s ‘Divine
Poem’ towards the spiritual closure of the final cadence. 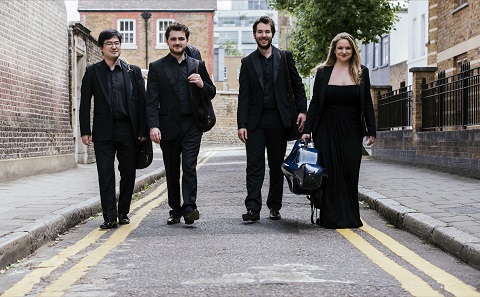 The Piatti Quartet had opened the recital with a performance of Purcell’s Chacony that, characterised by a cool detachment, minimal vibrato
and barely-there pianissimos, emphasised the cerebral workings-out of the
work over its timbral diversity and harmonic richness. Violinists Nathaniel
Anderson-Frank and Michael Trainor swapped first and second fiddle chairs
when the instrumentalists joined Bostridge and Drake in the second half of
the concert for a tremendously detailed performance of On Wenlock Edge in which delicacy was
allied with declamatory focus. At times I felt that the Piatti might have
been even more assertive partners in articulating Vaughan Williams’ musical
arguments, but they played with pictorial evocativeness and technical
precision, as exemplified at the opening of the first, eponymous Housman
setting, as their shimmer of agitated tremolando gave life to the shivering
wind which sweeps through the forest of the exposed escarpment.

Bostridge’s tenor was quite veiled at the start of ‘From far, from eve and
morning’, as Drake’s chords strummed solemnly, but as always he was alert
to every textual and musical detail – swelling slightly through ‘The stuff
of life to knit me/Blew hither’, imbuing the pronouncement, ‘here am I’,
with nuanced resonance, somehow even seeming to add weight to the silence
which precedes the final line statement, ‘Ere to the wind’s twelve
quarters/I take my endless way’ – and the song gained warmth and motion,
voice and strings perfectly synchronised. Similarly, above beautifully
hushed strings, Bostridge differentiated the dialogue of the living and the
dead in ‘Is my team ploughing?’ with wonderful dramatic and emotional
impact. The enquiry, ‘And has he found to sleep in/A better bed than
mine?’, was loaded with desperate intensity, while the response, ‘I cheer a
dead man’s sweetheart’, faded into evasiveness – ‘Never ask me whose’ – as
the muted strings’ reprise of the opening muted pushed aside the ghostly
questioning.

The piano’s terse arpgeggios and the strings’ pizzicato chords established
a piquant irony in ‘Oh, when I was in love with you’ but this was
extinguished by the mists and tolling bells of ‘On Bredon Hill’, in which
Bostridge countered the poet-speaker’s relaxed remembrance of Sunday
mornings when ‘My love and I would lie’ with the intensity of the
protagonists’ sensory experience – ‘see the coloured counties,/And hear the
larks so high’ – the fullness of the open vowels heightened by the quietude
of the instrumentalists’ dense chords. Bostridge summoned an epic tone to
recall ‘the snows at Christmas/On Bredon top [were] strown’ which carried
into Drake’s thudding bells and the circular roaming of the cello (Jessie
Ann Richardson) and viola (Tetsuumi Nagata) which, like a musical magnet,
draws the mourners to Bredon Hill.

The seductive vision of ‘valleys of spring of rivers’ which opens Vaughan
Williams’ final setting, ‘Clun’, gave way, inevitably, to the heavy tread
of the journey towards the ‘quieter place than Clu,/Where doomsday may
thunder and lighten/And little ’twill matter to one’ – a quasi-inversion of
the energy of the opening song of the composer’s Songs of Travel.
Here Bostridge’s voice darkened to a shadow, an echo: human mortality
cannot outrun the ravage wreaked by time.

This performance was recorded by the BBC and will be broadcast on
Radio 3
on Tuesday 5th December at 7.30pm.

Purcell – Chacony in G minor for string quartet, William Croft – ‘A Hymn On
Divine Musick’, Pelham Humfrey – ‘Lord, I Have Sinned’ and ‘Hymn to God the
Father’, Britten – The Holy Sonnets of John Donne, Vaughan
Williams – On Wenlock Edge.