The three-act tragedy sung in Italian, and based on a libretto by Luigi Illica and Giuseppe Giacosa tells the tale of 15-year old Cio-Cio San (a.k.a. Madama Butterfly), who weds American naval officer B.F. Pinkerton based in Nagasaki, Japan. After he returns home to the U.S to find a “proper” American wife, she bears his son, little Sorrow, and awaits his return with tragic consequences.

The 150-minute production featured a particularly strong cast of principals. The first of those is world-renowned Tokyo-born soprano Hiromi Omura, who delivered a masterful performance as the young geisha in a role she debuted in 2004, and has now performed over 100 times. As she morphed from lovesick girl to noble young woman who dies for honour, her soaring, well-paced vocals in the notoriously difficult part were fully displayed from her opening “Ancora un passo or via—Spira sul mar,” until final “suicide aria” “Con onor muore.” 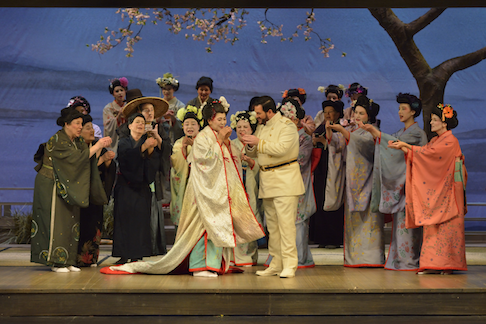 Omura also performed her highly anticipated aria “Un bel di vedremo” with limpid fragility and ringing high notes as sparkling as the starry night sky, trembling in anticipation for her husband’s ship to sail back into harbour that earned her spontaneous applause and cries of brava. However, it’s during her silent vigil as she awaits Pinkerton’s return during the exquisite “Humming Chorus” where Omura’s profoundly moving artistry spoke loudest, as seemingly every shade of raw, vulnerable emotion flashed across her face: from hope to fear; love to loss, lit beautifully by Bill Williams.

Her equal in every way, acclaimed Canadian lyric tenor David Pomeroy created a strapping, 19-year old Pinkerton, who swaggered through his opening aria “Dovunque al mondo” fueled by strains of the “Star Spangled Banner,” and chillingly proclaimed “America forever.” Pomeroy set sail on his own harrowing narrative arc with port stops along the way, including sweetly tender love duet with this new bride, “Viene la sera,” until becoming unmoored and wracked with remorse during Act III’s “Addio fiorito asil” sung with dramatic intensity.

It’s also a testament to Pomeroy’s powerhouse acting skills that he earned perhaps one of the greatest compliments during his opening night curtain call: boisterous boos from a clearly engaged, impassioned audience on their feet for his wholly believable characterization that the artist acknowledged with delight.

Baritone Gregory Dahl also brought subtle nuance to his role as US consul Sharpless, who urges Pinkerton to be cautious of Butterfly’s heart, and later becomes caught in the lovers’ downward spiral during trio “Io so che alle sue pene,” sung with Pinkerton and Suzuki as a well-balanced ensemble. 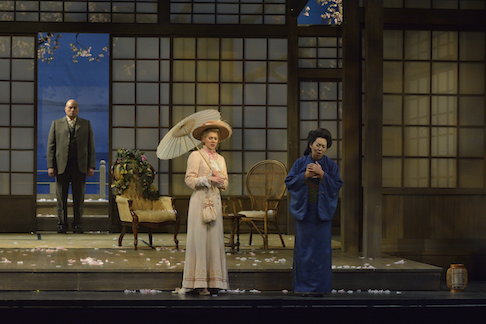 However, the production is not without flaw. Cio-Cio San—now Mrs. Pinkerton—remained resolutely Japanese in appearance, still dressed in a kimono during Acts II and III despite singing of her “American house” that visually weakened her character’s transformation. And marriage broker Goro, (tenor James McLennan), who machinates the nuptials between Pinkerton and Cio-Cio San appeared far too polite and at times overly pedestrian for a scheming plot driver.

Just as Cio-Cio San paints pictures of wisps of smoke with her voice during her iconic “Un bel di vedremo,” Herriot likewise uses the stage as a canvas for his creative ideas.

His thoughtfully created tableaux including glorious eye candy, including Cio-Cio San’s first entrance flanked by the MO Chorus of geishas, well prepared by Tadeusz Biernacki, that primly take their place and twirl their delicate parasols on the tiered set of sliding shoji screens originally designed by Patrick Clark for Pacific Opera Victoria. Herriot also injects a new layer of fascinating sub-text into the opera’s dying moments, as each lead character suddenly reappears onstage to witness Butterfly’s demise, now trapped in their own world of unspoken regret.

Puccini’s Madama Butterfly does not offer the grand spectacle of Verdi’s Aida or even his own opulent Turandot, preferring instead to peer deeply into the hearts and minds of its doomed characters. Despite those that might still believe his “East-meets-West” operatic butterfly should be captured and pinned to a board—archaic and irrelevant, to be shelved as a curiosity of the past fueled by the then fashionable “orientalism”—MO’s latest production proved that in the hands of a soaring cast, this great Italian love story still flies high.