John Adams’ eighth opera takes his now astonishing sonic and dramatic vocabulary to ever greater depths, creating, ultimately, shattering climax to the lives of seven early Californians, their stories, as construed by librettist Peter Sellars, unfolding both in their own words and in the words of poets and slaves in American history. The real protagonist of Girls of the Golden West is however the corpus of the 49er miners who pursue riches above all else and their inalienable right to the gold of the California mountains.
Girls of the Golden West, as staged by Peter Sellars, is an apt prelude to San Francisco Opera’s forthcoming Der Ring des Nibelungen (it’s essentially the same story). But far more than a prelude it stands on its own as the artistic exploration of the human and social forces of the American post-industrial era (Wagner’s Ring is of the industrial world), insisting that we inherit from these miners a collective guilt for destroying the hopes and lives of people of color — black, brown and yellow, and, yes, even poor Joe Cannon from Missouri (white). It is of epic proportion though it takes a mere three hours compared to the sixteen hours of Wagner’s epic when both finally arrive at a moment of purification. 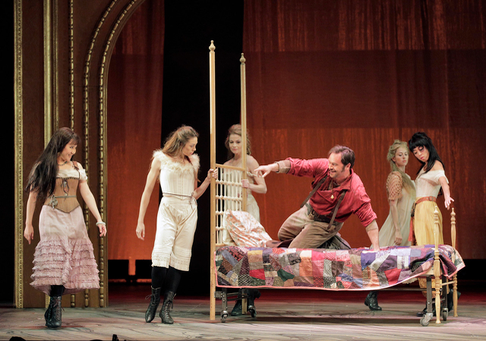 The minor Joe in the whorehouse, with whore Ah Sing, and corp de ballet whores
But Sellars’ Girls of the Golden West goes dramatically beyond its philosophic purpose, immersing us in Adams’ musical worlds of each of its characters. Dame Shirley is an actress from New England who plays Lady Macbeth to the down-on-luck miner Clarence’s Macbeth inciting the miners to lynch Ned Peters, a black slave turned teamster. Joe Cannon’s Sally back home in Missouri marries a butcher, on the rebound he marries a Chinese whore, Josefa is the beautiful Latina lure to attract the miners to the bar where RamÛn is the croupier.
Act I is an idyll of perfect life inasmuch as life may be dreamt to be in this beautiful if rough, ugly world. In Act II these worlds are brutally vanquished in music that relentlessly throbs in powerful pulses, punctuated with bursts of tone that cannot be placed.
This bit of California history is real, in the real words of its historical actors, and thus alien to history or myth as usually imagined by opera where elaborated human situations are acted by invented human psyches. Composer Adams composes music to these real words that create art songs, an extended series of songs that you know and feel to be a cycle of some sort. There is a rare duet or two, six or so magnificent male choruses, several ballets (a respectful bow to grand opera), an occasional orchestral interlude. But there is no dialogue and there is no real story.
It is beautiful music of profound lyricism that is fiendishly difficult to sing, thus adding to the atmosphere of art that liberates this Girls of the Golden West from its imposed moral reprimand.
The Sellars production plays on the minimal, the literal and the naive. Scenic designer David Gropman ignores masking, thus there is no illusion. We know what we see is theater, and only that. Against an upstage gold drape stagehands walk on and off with props now and then. Visual quotes from rustic melodrama fly in and out. There is a huge stump and slice of a sacrificed California redwood. Costume designer Rita Ryack stays literal to the period, adding naive concept to dancers’ costumes. Choreographer John Heginbotham too played the naive against the en point classical technique exploits of the four women of the corps de ballet and particularly for the spider dance of prima ballerina Lorena FeijÛo as the famed Lola Montez. 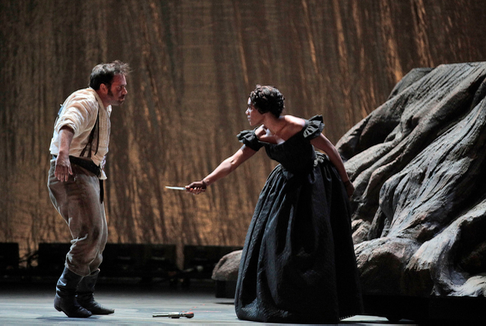 Josefa in the act of murdering Joe
But finally it was the words, and nothing but words, discretely if significantly amplified by sound designer Mark Grey. Amplification served to add heroic dimension to the voices most notably to mezzo-soprano J’Nai Bridges as Josefa Segovia and baritone Elliot Madore as RamÛn, these two roles the focus of the Sellars’ romantic tragedy — and it was sublime. Bass-baritone DavÛne Tines as Ned Peters as the former slave was the moral focus, drawing a character of immense stature. Tenor Paul Appleby was the driven miner Joe Cannon who with soprano Hye Jung Lee as the Chinese whore Ah Sing created the grittiness and hopelessness of the gold rush free-for-all in their go-for-it-all performances.
Finally the soul of the opera was found in the performance of bass-baritone Ryan McKinny as Joe’s friend Clarence who wielded Lady Macbeth’s knife, forever transforming the lives of the opera’s victims, and in the end, perhaps, embodying the opera’s spiritual redemption (if there was one). The opera’s redeemer was Dame Shirley sung by soprano Julia Bullock who saw all, and as Lady Macbeth motivated all. Mlle. Bullock found the amplitude of emotional tone to observe, live and understand the tragedies of Downieville, by now a mere gold rush relic in the high Sierras, never letting us forget that these are real people with real names as was she (note that skin color was not always consistent with character).
These unique artists responded perfectly to the John Adams musical world, as did the spectacular accomplishment of the men of the San Francisco Opera chorus, all mastering the daunting score in what seemed to be a perfect performance (the fourth of eight). Conductor Grant Gershon took the San Francisco Opera Orchestra to the magnificent heights of the Adams score, in sometimes mind and heart boggling amplified fortes.
Surely this is composer John Adams’ masterpiece. It is understood that the masterful Peter Sellars setting of the opera is but one of the infinite possibilities for stagings of the Sellars libretto and Adams score.
Michael Milenski