Dartington Hall is a Grade1 listed country estate located in Totnes, Devon.
The estate was built in the 14th century but founded as a centre for
culture and creativity by Dorothy and Leonard Elmhirst in 1925. The
International Summer School moved to Dartington in 1953, following its
founding by William Glock in 1948 at Bryanston School in Dorset.

The Summer School & Festival is well known for its extraordinary
courses, providing a unique and immersive experience for musicians of all
levels of learning, talent and skill. It is renowned for offering amateurs,
students and young professionals a unique opportunity to play with the
world’s leading musicians – and offers the space to established artists to
experiment, and explore new collaborations.

Professor Joanna MacGregor OBE is Artistic Director of the Summer School
& Festival and is a British concert pianist, conductor and composer. As
well as directing the artistic programme for the festival, she is Head of
Piano at the Royal Academy of Music, Professor of the University of London
and holds an honorary doctorate from the University of Cambridge. She was
previously artistic director of the Bath International Music Festival from
2006 to 2012 and in 2015 was appointed Artistic Director of the Dartington
International Summer School & Festival. 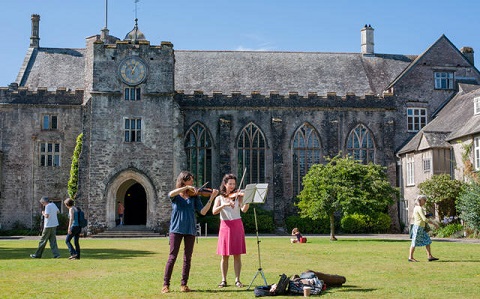 Opera highlights include Felicity Lott and Mark Austin teaching an Advanced
Opera Course, a performance of Mozart’s The Marriage of Figaro and
vocal masterclasses from Clare Wilkinson, Nicholas Clapton and Sarah
Gabriel.

Dartington offers a bursary scheme to help students, graduates and young
musicians attend advanced courses. Bursary applications will be accepted
from December 2017 and applied for via www.dartington.org/summer-school.