The protagonists Elvira Walton and Lord Arturo Talbot are sung by Albina Shagimuratova and Lawrence Brownlee. Sir Riccardo Forth, rival of Arturo for the affections of Elvira, is portrayed by Anthony Clark Evans, Sir Giorgio Walton, uncle and protector of Elvira, by Adrian S‚mpetrean. The roles of Queen Enrichetta, Sir Bruno Robertson, and Lord Gualtiero Walton are sung by Lauren Decker, Alec Carlson, and Alan Higgs respectively. The Lyric Opera Orchestra is conducted by Enrique Mazzola and the Lyric Opera Chorus is prepared by Chorus Master Michael Black. This production is owned by the Metropolitan Opera, New York with original sets and costumes by Ming Cho Lee and the late Peter J. Hall. The current revival is directed by Eric Einhorn, with lighting by Chris Maravich and wigs and makeup by Sarah Hatten.
During the three scenes of Act One vocal numbers are distributed evenly among the principal singers, predominant conflicts are drawn, and the inevitable crisis is reached by the end of the act. Additionally, the chorus is established as public witness to and commentary on the action. During the brief orchestral prelude, led with brisk tempos by Mr. Mazzola, a painted scrim suggests a tranquil, natural scene; when lifted, the exterior of a collective fortress and church become the immediate focus of the stage. Ming Cho Lee’s realistic sets effectively shift the peaceful depiction of nature into the observable distance. At daybreak the chorus representing a change of guard led by Sir Bruno declares “All’erta!” (“Awake!”). Morning hymns sung by the principals are audible from within the church. The chorus, outfitted in a mix of armor and Cromwellian garb, assembles in formation after the sound of a snare drum. Bound with other political prisoners by a rope indicating captivity, the former Queen Enrichetta is led across the stage. As Mr. Carlson’s Bruno directs the spirits of the chorus “A festa!’ (“Rejoice!”), the assembly departs the stage. The balance of the first scene is devoted to Riccardo who enters in a state of dejection. In this role Mr. Clark Evans captures the mood of a dispirited suitor for he has just learned that his beloved Elvira has been promised unexpectedly in marriage to Arturo. In confessing his emotions to Sir Bruno, the declamation used by Clark Evans incorporates lyrical phrasing heard to full extent in the following aria. As a response to the sound of Elvira’s voice he can still utter her name with touching legato while conversely describing the “amari pianti” (“bitter tears”) which he cannot help but feel in his heart. In the first part of his subsequent aria Clark Evans kneels while he muses on the “fior d’amore” (“flower of love”), a phrase which he decorates excitedly before giving “la vita” (“life”) a distinctive, somber color. His previous hope “del tuo amor” (“of your love”) is sung with lingering rubato as a convincing memory. These latter thoughts predominate in the second, more rapid part of Riccardo’s solo, sung while Sir Bruno prods him to take solace in military life. Clark Evans sings “Bel sogno beato” with lyrical ardor while ending this memory and scene with polished runs on “tenero” and a dramatic top note in the line “d’un tenero amor.”

At the start of the second scene the scrim rises to show a spare interior with Giogio seated at a table and Elvira caught in nervous movement. Costumes reveal the noble standing of this uncle and niece, while Elvira speaks here of “mio secondo padre” (“my second father”). This closeness indeed allows Giorgio to communicate the news of her impending wedding. Mr. S‚mpetrean’s rich, bass voice envelops ideally the role of Elvira’s adviser. His expressive face and gestures communicate here and in later scenes the position of guiding authority. When S‚mpetrean imparts his tidings with the emphatic line, “Oggi sposa sarai” (“Today you will be a bride”), his voice rises naturally in both pitch and volume to conclude with the mood of joy. In Elvira’s initial response to the announcement Shagimuratova shows the character’s implicit misunderstanding in the words “Strascinata – un dÏ sarÚ” (“If I am forced one day”), while the vocal line is performed here with cautious correctness. Once Elvira realizes that she is to marry her true beloved Arturo, both characters sing in unified celebration. When Giorgio’s impatience with the maiden recedes, his solo description of advice given to Lord Walton is expressed by S‚mpetrean in rounded, vibrant lines concluding with striking decoration on “la figlia misera” (“the wretched daughter”). The scene concludes with the rapid duet “A quel suono, al nome amato” (“At the sound of the beloved’s name”) and Shagimuratova’s squarely-placed top note to signal her happy state.
The third and longest scene of the act introduces onto the stage the character Arturo, who is greeted along with Elvira by the chorus of squires and maidens. This scene exemplifies Mr. Brownlee’s superlative performance, which seems to become even more fervent during the course of the opera. Simply put, Brownlee’s tenor voice has the gift of projecting and varying Bellini’s vocal line with a beauty and intensity that defies comparison. In his initial “A te, o cara” (“To you, beloved”) the voice undulates while singing embellishments on the formulation “in pianto” (“weeping”) experienced earlier as a sign of love. Brownlee’s expression rises with gradual intensity on “esultar” (“exultation”), yet also with sudden emotion on the past “tormento” now recalled. A concluding high note decorating “m’Ë pi˘ caro” (“but even more dear”) summarizes the character’s ultimate sense of joy at this moment. In the ensemble with Giorgio, Elvira, Walton and the chorus Brownlee’s emphatic appeal “Benedici” (“Bless”) traces a distinct line guiding the hope for happiness. At this juncture of unquestioned “gioia” Arturo becomes distracted at the sight of the captive noblewoman. When the others leave to prepare Elvira for the ceremony, Arturo learns that he is in the presence of the deposed queen. Since his own father had died for the Stuart cause, Arturo is determined to save Enrichetta. The dialogue between Ms. Decker’s moving Enrichetta and Arturo intensifies with Brownlee’s spirited assurances of help even at the expense of his own life. The return of an innocent Elvira in partial bridal array not only interrupts the plan of rescue yet will also provide a means to carry it out. Shagimuratova’s performance of “Son vergin vezzosa” (“I’m a pretty maiden”) enhances her character’s unsuspecting trust in the power of love. Here the voice moves fluidly throughout the skipping lines with Shagimuratova singing well-chosen variations in the repeat. Elvira’s suggestion that Enrichetta try on the bridal veil becomes, of course, Arturo’s idea for disguising the queen. The heroine’s departure from the scene to complete her bridal attire leaves Arturo again alone with the queen. Brownlee’s impulsive movements and dramatically impassioned cry “Vieni … per piet‡” (“Come … do come”) place the fleeing pair squarely in the path of Riccardo. Since the latter has returned to challenge Arturo to a duel, their subsequent exchange provides an opportunity for heightened, vocal display. As an illustration of his character’s anger and excitement Clark Evans sings with a series of rapid runs the line “Qui ti sfido a mortal guerra” (“I hereby challenge you to a duel”). In response, Brownlee punctuates “Sprezzo … il tuo furore” (“I scorn your fury”) with comparable embellishment and concludes with a series of ascending, high pitches. The subsequent duel is credibly staged and stopped only when Enrichetta intervenes to prevent bloodshed. At the revelation of the queen’s identity, Riccardo encourages her escape with Arturo and the damning political association this will cause. The return of the wedding guests allows Riccardo to point to Arturo’s presumed treachery. In the concluding ensemble Shagimuratova delineates Elvira’s dismay with a secure line traced through swelling orchestral variation. Her emotional state is enhanced here with touches of vibrato and a final trill before collapsing in the presence of the shocked assembly. 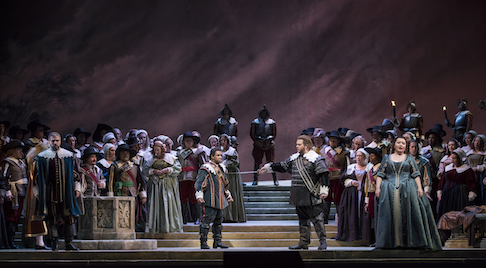 Adrian Sa?mpetrean, Lawrence Brownlee, Anthony Clark Evans, Albina Shagimuratova [Photo © Todd Rosenberg]
Act Two of I puritani is bookended by male voices reflecting on and reacting to Elvira’s condition and its consequences. At first, the chorus of sympathizers solicits tidings of Elvira from Giorgio until he describes her present instability. In his aria, “Cinta di fiori” (“Decked with flowers”) S‚mpetrean presents with resonant legato a sympathetic image of the girl’s volatile mind. His emphasis on “chiede all’aura” (“she asks the air”) has the effect of a heartfelt wince. Both he and Riccardo become witness to Elvira’s distracted spirit when she enters and sings “Qui la voce sua soave” (“Here his gentle voice”). In this showpiece aria Shagimuratova traces limpid streams of vocal color to combine the disjointed memories of past hope with imminent delusion. In the rapid segment of the aria she incorporates individual decorative and dramatic gestures, illustrating to both men her delirium. Once she departs, it is left to Giorgio to convince Riccardo to reverse his feelings of resentment. S‚mpetrean leads this exciting exchange with fervent, repeated appeals on “il rival salvar” (“save your rival”) and extended declarations to “Riccardo.” The final duet “Suoni la tromba” (“Let the trumpet sound”) shows the success of Giorgio’s wisdom with heroic conviction from both singers on “Libert‡!”
At the start of Act Three the exiled Arturo has returned secretly to his homeland. In order to simulate the wide-ranging danger of his position, this production uses the side-aisles of the theater for approach or departure of soldiers and principal. After his moving exclamations of “O patria! O amore!” Brownlee details with equal fervor “Com’ Ë dolce” (“how sweet is”) the moment of return after months of exile. When he hears from offstage Elvira singing “La mia canzon d’amor” that he used to sing to his beloved, he begs to see her yet receives no response. Sunk in further reflection, Brownlee relates his “esilio, odi il mio pianto” (“my exile and my tears”) with an effective, saddening diminuendo. He repeats the very melody just sung by Elvira, now with the words “Corre a valle, corre a monte” (“He hastens to valley, to mountain”). This rejoinder by means of the love-song indeed rekindles Elvira’s sanity and unites both momentarily in their previous affection. The identification of the unknown woman as queen finally dispels Elvira’s doubts. In their duet starting “Vieni fra queste braccia” (“Come to my arms”) Brownlee and Shagimuratova deliver excited top notes in their unified exhilaration.
Yet this happiness requires a further vocal development. At Riccardo’s declaration of Arturo’s capture and imminent execution, Elvira’s fragile state fades once again into distraction. Before the political resolution yielding a general pardon to all those guilty, Arturo accuses his opponents of cruelty toward Elvira. In the scene beginning “Creadisi, misera!” (“The poor girl believed”) Arturo delivers his final appeal to spare Elvira’s sanity and life. Brownlee sings “Crudeli!” (“Cruel men!”) with a dramatic force demanding attention. When he warns with emotional top notes “Ella Ë tremante, ella Ë spirante” (“She is trembling, she is dying”), he has surely moved the crowd to sympathy. In the repeat of his admonition, Brownlee sings “Un solo istante, Ah! L’ira frenate!” (“For a single moment, cease your wrath!”) with Bellini’s challenging, higher pitches bringing listeners to gasping tears. Once the pardon is announced at the sound of a hunting horn, sanity and love are restored. The final cabaletta for soprano is included in this production. Shagimuratova embellishes this aria with spirit and freedom, in the conclusion of a performance that ranks among today’s great tributes to nineteenth-century opera.
Salvatore Calomino