Ring fever was high in the rather-more-than-usual well-dressed, quite excited crowds (standees three deep) present for the first part of the famous tetralogy of three operas plus satyr play (that’s Das Rheingold).
Though first, Rheingold was the last of the tetralogy composed, thus Wagner had already forged the means to taunt us with the magic fire music that will protect us and finally consume us this Sunday, fire that issued full force from the mighty forces of the superb San Francisco Opera Orchestra of ninety players — curious ears were cocked for four Wagnerian tubas. Conductor Donald Runnicles, of the 2011 San Francisco Ring again sustained a convincing Wagnerian continuum. 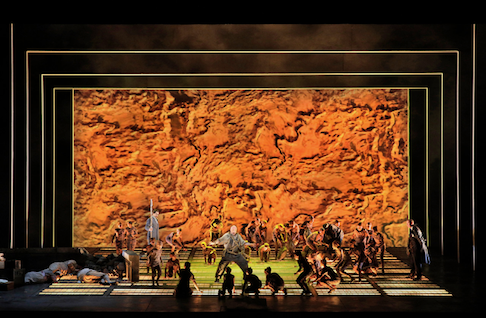 A moment in the Nibelungen workshop
Back in 2008 when Francesca Zambello’s 2006 Rheingold was unveiled here in San Francisco the chorus of anvils (last night six off-site players hammered 15 tuned anvils) was prelude to a surprising, indeed stunning vision of the Nibelungen workshop with its multitude of child workers (this was the Industrial Revolution after all). For many of us this was the third time for this revelation, hopefully it once again thrilled those new to this production.
In pre-opening press events care was taken to stress important modifications to the original production, specifically the recasting of many of the proscenium wide videos that now impose video designer S. Katy Tucker’s take on Richard Wagner’s gloriously imposing soundscapes, beginning with the visual play of vastly magnified water molecules intended to introduce the theme of environmental destruction, an important element of the Zambello production.
As well digital technology in more recent years has added stage floor video and lighting possibilities to scenography. This was present in the checkerboard of video screens that was now the stage floor pavement offering the intrusion of ever greater color interpretation. Perhaps an unintended theme to Mme. Zambello’s production will be the tyranny of technology.
The most significant addition to the production is the splendid cast that was introduced to us last night starting with the elegant and cocky shyster Wotan of bass baritone Greer Grimsley. Mr. Grimsley’s well-focused voice promises us an unusually articulate Wotan who has a lot of tough stuff to come to grips with in the next two operas. Of startling effect was the Alberich of German bass baritone Falk Struckmann in his role debut. Mr. Struckmann, once a formidable Wotan himself, was of well-voiced, sufficiently evil stature to forge an amazing weapon of destruction (the ring) and impose its use (his curse).
Dominating the proceedings was the Loge of Czech tenor Stefan Margita (a veteran of the 2008 production in his role debut) — oh so charming, impertinent, supercilious and oh so profoundly cynical. Mr. Margita’s Rheingold Loge was of masterpiece status. 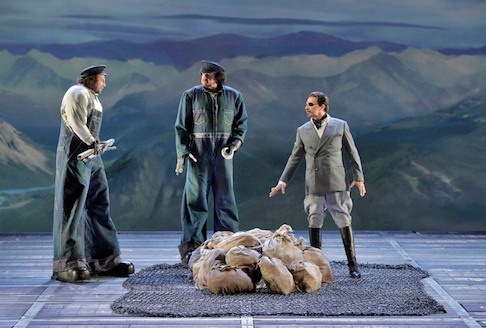 Fafner, Fasolt and Wotan
The Zambello Rheingold coup de thÈ‚tre is of course the builders of Valhalla, the giants (literally) Fasolt and Fafner. Fasolt, sung by baritone Raymond Aceto (tonight’s Hunding) is smoother and a bit smarter than Fafner, sung by bass Andrea Silvestrelli in a rough and dumb voice. Directorially his mutual infatuation with Freia, beautifully sung by the aspiring dramatic soprano Julie Adams, was ostentatiously overstated. Tenor Brandon Jovanovich (tonight’s Siegmund) added fun, empty-headed personality to Wagner’s conceited gods as Froh, and baritone Brian Mulligan redeemed his pallid Donner with a splendidly delivered command of the storm that clears the skies for a vision of Valhalla (unseen).
Mezzo soprano Jamie Barton as Wotan’s wife Fricka has yet to prove herself. That she may do tonight in Die Walk¸re. Plus we will find out on Friday much more about the Mime of David Cangelosi.
Some of the locales of this first installment of the “American” Ring seemed less specific. Huge billows of stage fog obliterated what I remembered as a gold prospector’s gully, and now the Rhine maidens were burdened with cumbersome, self conscious choreography. As the Rhine valley the Gilded Age ambience of the Newport R.I. was fully intact.
Mme. Zambello did not take a bow.
Michael Milenski