Its primary role, the possessed Renata, is punishing nearly beyond comprehension and its relentless, lurid narrative is difficult to follow, and in fact the vulgarity of its music can be off-putting.
The Fiery Angel is the third of Prokofiev’s seven operas (The Gambler and Love for Three Oranges are the first two), and the last opera he wrote before his return to Russia in 1936. Though begun in 1919 when the composer was 28 years old, and completed only in 1927 it was not premiered until 1955 in Paris and then in Vienna.
There is no doubt that The Fiery Angel is Prokofiev’s most intense dramatic music. It tells the ugly story of a young girl possessed by an angel, though perhaps a devil. She wishes to make physical love with her possessor. Two or so hours and several mis-adventures later she is exorcized (unsuccessfully) in a convent together with other nuns. It is a medieval tale of expressed sexual desire told from an early twentieth century symbolist perspective. 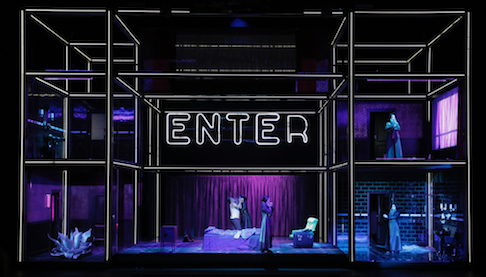 At the beginning there was the hotel room.
The possessed Renata and her would be redeemer, the knight Ruprecht seek and do find the angel of fire incarnate with the help of sorcerers. Finally Renata gives herself sexually to Ruprecht in place of the angel. A short philosophical discussion ensues between Mephistopheles and Dr. Faustus. And, voil‡, Renata is condemned to be burned at the stake.
Mariusz Trelinski, artistic director of Teatr Wielki, staged the opera updating the action to what seemed to be rural eastern European surroundings in the communist 1960’s. Ruprecht seemed to be some sort of traveling salesman (if there were such then and there) who happened onto a seedy small town hotel. One recalled the Arthur Miller play Death of a Salesman.
Strangely, though we are in France and there are scenes specifically in medieval Cologne there were English language neon signs placed high in a multi-storied grid that was the stage face. The Cologne scenes were then staged on platforms in its upper reaches, effectively and unfortunately disembowelling Renata and Ruprecht’s voices from the dissonant maelstrom emanating from the pit way below.
Japanese conductor Kazushi Ono urged ever greater volume and bombast from the stalwart Orchestra de Paris, complementing the crassness of the staging. One of the many remarkable moments was in fact the long awaited sexual consummation of Renata and Ruprecht, the couple humping on an upper level, the orchestra turging away way down below while a miniature Ruprecht double attempted to jump rope on the stage floor. 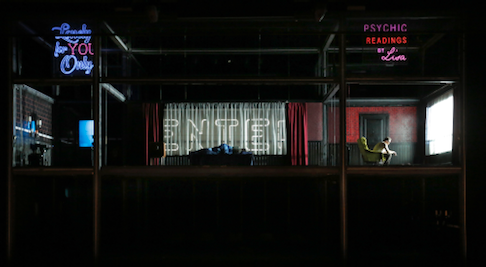 Renata (on left), Ruprecht (on right)
The role of Renata was sung by Auörin? Stundyt?, the Lithuanian soprano who incarnated the brilliant Lady Macbeth of Mtsensk in Lyon. Mme. Stundyt? brought similar intensity to the obsessed Renata, but fell victim, understandably, to the obtuse staging demands as well as to the stamina needed to complete the role. She was essentially voiceless for the concluding exorcism.
The American baritone Scott Hendricks was the Ruprecht. This esteemed artist seemed a fish out of water, his fine, Italianate lyric voice not finding an edge or the volume needed to embody this complex, possessed-by-love knight who first attempts to rape Renata, and then in this production is raped by Renata. As well, and more importantly, Mr. Hendricks was placed in the upper reaches of the grid for his big scenes, depriving us of a direct presence, and an immediacy of voice.
Faring better were tenor Andrei Popov as Mephistopheles and bass Krzysztof Baczyk as Faust who both essentially tore up the stage in their stage level scene in the hotel bar. Both artists succeeded in projecting words and sentences that directly tied us to content, however oblique, an attribute sorely lacking in the balance of Mr. Trili?ski’s production.
Michael Milenski