Seven Stones is an Aix Festival commission to the Czech composer Ondrej Ad‡mek (b. 1979), the Icelandic poet SjÚn — a pen name meaning “sight” (b. 1962), and the NiÁois dancer / metteur en scËne …ric Oberdorff (thirty-some) that resulted from a 2012 symposium at the Aix Festival’s AcadÈmie imagining a or maybe the future for opera.
And voil‡, six years later a futuristic opera indeed. It blew us away by sheer audacity, charmed us by sheer audacity and entertained us by sheer audacity. Seven Stones is, need I say, complicated — a libretto, in English, of unfathomable depth based on stones and stoning and the magical number seven passing through nonlinear time from middle Europe through Argentina to Paris and Jerusalem passing by the moon to return finally to middle Europe for a murder then an admonition. 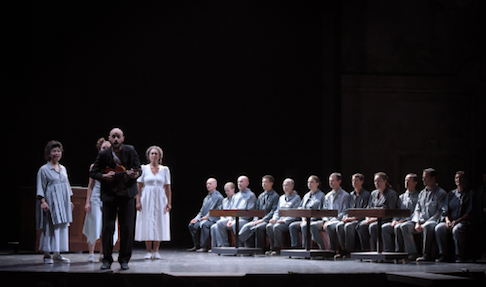 Principals and chorus of Seven Stones
There was no orchestra and no scenery but there were four singers who rarely, very rarely, and only incidentally sang and there was a four part (satb) chorus, Paris’ accentus / axe 21, that in fact never sang a note. These twelve singers associated with Paris’ elite Ensemble Intercontemporain spoke rhythmic text configured as magnificent, complex syllabic, toneless madrigals. These choruses were the major part of the evening’s one hour twenty minute duration.
During his twelve year reign departing Aix Festival general director Bernard Foccroulle (Foc-crewl- lih — did I get that right?) tenaciously and fruitfully explored opera’s most basic tenet — collaboration. Seven Stones well serves as his crowning achievement!
Seven Stones is a musico-dramatic mechanism. the score is not only auditory notation, in effect it also seems to be notated movement that is the staging of its 13 scenes. The singers magnify the colors of their sound world by hitting, rubbing or pounding on abstract constructions, some huge, that serve the story and music and as well as create the spectacle. There were a few instrumentalists (violin, cello, exotic zithers, an electric organ to create quotations of western and eastern music), whose on stage instruments were picked up from time to time by principals and chorus to be used as rhythmic noise sources.
There is of course the central figure of the poem. The stone collector (mineralogist) spoke and stuttered throughout the evening, abetted by three female voices who assumed various guises to confound the stone collector in complex clucks, pops and runs of language, sumptuously notated and executed. Needless to say these performances were as astonishing as the madrigals executed by accentus / axe 21.
Perhaps three, maybe four of the stones might have sufficed. The novelty wore thin.
Dido and Aeneas is Henry Purcell’s 1688 famous operatic tragedy, famed not only for the wrenching suicide of its heroine Dido, but also by the hopelessly bleak lament of the citizens of Carthage in their closing madrigal. Though of monumentally tragic proportion the 50 minute or so duration of Purcell’s opera usually condemns it to share the stage with another short opera, diluting the tragic spell it creates.
The Aix Festival extended the opera’s length, making it a one opera evening however brief (one hour twenty minutes) by adding a prologue to replace the original, long lost Purcell composed prologue. The Festival commissioned French novelist Maylis de Kerangal (b. 1967 in Toulon — her most recent (2016) English translated novel is The Heart: a novel†[RÈparer les vivants]). Mme. de Kerangal’s Dido and Aeneas prologue imagines Dido arriving in Africa on a ship together with 80 kidnapped girls, prey to Dido’s army of men who will father their children in Carthage. 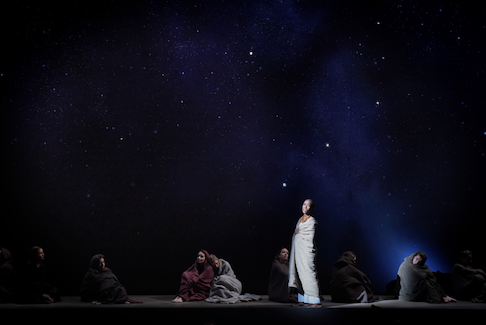 Actress Rokia Trore with a few of the 80 silent abducted Cyprian girls
Mali born, internationally decorated actress Rokia Trore, founder of the Passerelle Foundation [for the arts] in Bamako, Mali’s capital, delivered the monologue. Slowly traversing the stage left to right she delivered her first-hand, immediate account of the fictional abduction of the girls, the abuses they suffered during their voyage to and the miseries of their lives in Africa. It was spoken in splendrous French, the official language of Mali.
The prologue did indeed offer an oblique perspective on the founding of Carthage back in 146 BC. Carthage, the city (in today’s Tunisia) was destroyed soon after it was founded. This new prologue well serves as a curse upon Dido’s city, and more immediately upon her impending marriage to Aeneas.
Said to be a production of the Aix Festival’s AcadÈmie, the principal roles of the Purcell tragedy seemed to be taken by apprentice artists, perhaps in appreciation that Dido and Aeneas was written to be performed by students at Mr. Priest’s boarding school for girls back in 1689. In Aix the promising voices of these young participants exemplified the early stages of mastery of their craft. Note that after the first performance (which I attended) the Dido was replaced by a career singer. 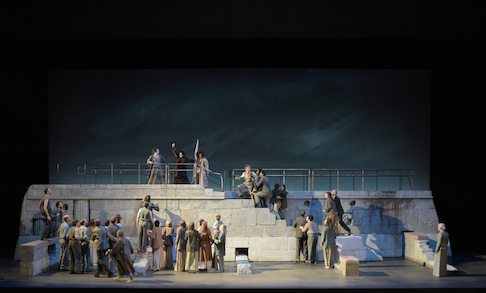 Three of the principals with the chorus of the Pygmalion Ensemble
The evening did however attain some tragic grandeur in the voice of the Carthaginians, the 30 singers of the chorus of the Ensemble Pygmalion, and in the rich realization of Purcell’s scanty original score (string quartet plus harpsichord). Of the well endowed instrumentation of Ensemble Pygmalion’s twenty-seven orchestra players, many doubling on additional instruments, the continuo generously consisted of two keyboards, three plucked instruments and three strings.
The Ensemble Pygmalion is resident at the OpÈra de Bordeaux, and associated with Paris’ OpÈra Comique. It is one of the cultural glories of France. For these performances in Aix the Ensemble Pygmalion was lovingly conducted by well-known Czech early music conductor V·clav Lucs, may we assume it was his edition.
The final chorus “With drooping wings” found its wanted sublimity and the audience roared its appreciation.
Orfeo & Majnun is a co-production with Brussel’s Monnaie and Rotterdam’s Stichting operas, a festival in KrakÛw (Poland), plus entities in Malta and Vienna, and a town in Portugal — an unlikely conglomeration indeed. It is intended as a public event/celebration (no admission charge) having premiered a couple of weeks ago in Brussels.
The opera, really musical theater, was the super-imposition of the Orpheus story and the Persian tale of Majnun and Layla. The common ground of the two stories are laments — Orpheus addresses Charon, the guardian of Hell’s entrance, and Majnun addresses the natural world (animals). But both Eurydice and Layla die anyway. While Majnun falls dead on Layla’s tomb, Orpheus becomes the voice of classical poetic love.
In Aix the single performance occurred in the Cour Mirabeau, the city’s famed grand avenue, of which it took over about half the length. Thousands of chairs were set up, enormous video screens were set up to pass the visual images along the route, and there was the attendant sound amplification (slightly out of sync with the visual images). One can only imagine the security that was in place. 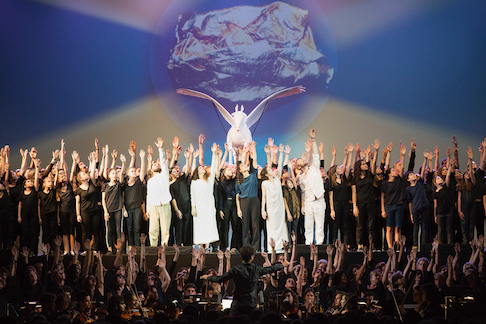 The final moment of the opera, lovers in white, narrator in blue
Like all productions of the Aix Festival this one too was beautifully and thoroughly produced, thus certainly our security was state of the art — only later did I understand that we had been sitting ducks.
The intent of the project was to illustrate a commonness of European and Middle-Eastern cultures. Certainly this was somewhat achieved even though the philosophic underpinnings of the two tales are strikingly different. However the juxtaposition of musical languages made it glaringly evident that there is irreconcilable difference of sensibility between the rich structures of Western music and the sharp melismatic lines of Eastern music.
The opera boasts three composers, the Palestinian Moneim Adwan who one assumes created the extended Arabic based episodes, the British composer and organist Howard Moody, and the Dutch composer Dick van der Harst. We had no idea who did what, except we assume that one or the other of the European composers will have accommodated the classical Arabic sounds to the basically musical theater sound of the evening.
Of the four fine singers only French baritone Yoann Dubruque as Orfeo stood out. Singing in English (Eurydice and the Narrator both used French, the Persians sang in Arabic) he alone found the direct and easy charm of musical theater.
Western music has traditionally used chorus to express a universality of sentiment. Thus in such an undertaking as this ode to multiculturalism a massive chorus would make its message exponentially more forceful. What seemed to be hundreds of amateur singers offered their voices to the many, not easy choruses that the composers included. These wonderful musicians succeeded with aplomb, singing without score in semi-staged movements.
It was a long one and one half hours.
Michael Milenski