Just under two years earlier, on Saturday 24th May 1973, the
Alexandra Palace and Park had opened, five years late and over-budget ( plus Áa change). This ‘North London Palace of the People’, located
on the site of a former 450-acre dairy farm which in 1856 had been
inherited by the non-agriculturally minded grandchildren of one Thomas
Rhodes, comprised a building spanning seven acres surrounded by 200 acres
of landscaped gardens. Built by Royal assent, the Palace was designed to
further the Victorians’ ethical endeavour to cultivate a ‘higher
civilisation’ – promotional advertisements promised “Healthy exercise,
rational recreation” – in which fresh air and music played an equal part.

The eastern transept comprised a concert room that could seat 3,000 people,
while the Great Central Hall could accommodate 12,000 people and a
2,000-piece orchestra. The huge site afforded the opportunity for varied
music-making, including al fresco performances on the banks of the Triple
Lakes. (If you’re wondering when my ‘review’ will start, I’d ask you to
bear with me, there is a point to the preamble …)

Not all have been impressed. Nikolaus Pevsner (in The Buildings of England, 1951) described the Ally Pally, as it
affectionately came to be known, as ‘one of the most extensive and most
prominently placed of London buildings’, but dismissively quipped that
‘there is not much else to be said about it’. And, from the start,
financial over-optimism or mismanagement, what you will, threw a shadow
over the Palace’s future. In the six months from November 1875, the venue
ran up a £23,000 deficit and economic dire straits becoming a recurring
trope, continuing as late as the 1980s when the then trustees, Haringey
Council, over-spent on a refurbishment and ice-rink. Fire also repeatedly
threatened to curtail the project, with the building going up in flames
just 16 days after the opening and again in 1980.

Over the years, the Palace has served as a hospital for Belgian refugees,
an internment camp for German and Austrian civilians from 1915-19, and as a
horse racing course, among other guises. In 1935, the BBC took on the lease
of part of the Palace, setting up studios is some derelict Victorian dining
rooms, and on 2nd November 1936 the first television broadcast
took place from the Ally Pally. Transmission was disrupted by WW2, when its
transmitter was used to jam German bombers’ navigation systems, and in 1947
by a fuel crisis, but Ally Pally studios remained the BBC’s main
transmitting centre for London until 1956. 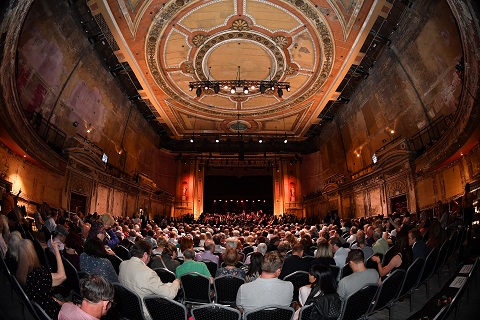 It seems serendipitous therefore that Alfred Meeson, who, with his
co-architect John Johnson, designed the Palace, had also built the Royal
Albert Hall – the home of the Promenade concerts since the summer of 1941.
For, this year, the BBC has chosen the Ally Pally for one of their
‘out-and-about’ Proms, in anticipation of the official reopening of the
Palace’s Theatre to the public on 1st December 2018 – restored
with the help of an £18.8m lottery grant, and part of a £27m restoration of
Ally Pally’s east wing.

So, what better choice to grace this Victorian stage than Gilbert &
Sullivan, censurers and celebrators of Victorian frailties and foibles in
equal measure. Staged with slickness and style by director Jack Furness and
conducted with gleeful joie de vivre by Jane Glover, Trial by Jury returned to what BBC presenter Petroc Trelawny
described as the wonderfully preserved dilapidation of the Palace’s
Theatre, and provided forty minutes of slight but so less satisfying
pleasure.

Originally composed and rehearsed in just a few weeks, and essentially a
single act of trifling tomfoolery, Trial by Jury presents an
unpretentious lampooning of Gilbert’s favourite target – the English
judiciary. There is no elaborate artifice in plot, lyrics or music, and no
spoken dialogue: just some direct expression and gentle musical parody of
Bellini and Handel. The characters, individual and choric, are
one-dimensional but the message is simple and clear. Angelina (Mary Bevan)
is suing Edwin (Sam Furness) for breach of promise; everyone in the court,
barring the defendant, is a hypocrite with their eye not on love but money,
and hankering after economic advantage.

Keel Watson ushered the BBC Singers into the courtroom with stentorian,
punctilious and supercilious concern for the decorum and propriety of
judicial process, and the male and female chorus members ranked themselves
stage right and left, displaying a wry appreciation of G&S manners and
mannerisms – though Jack Furness, in his attention to detail, sometimes
overlooked practicalities: it’s impossible to kneel and raise one’s hand in
solemn oath, and turn the pages of one’s score. 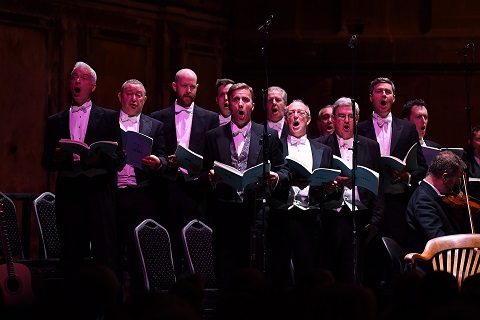 Sam Furness was the epitome of masculine artlessness and unconcern, frankly
admitting, as he lounged easily in the ‘dock’ and drew nonchalantly on a
cigarette, that he had dumped Angelina, but that was because he was tired
of her. Que faire? Edwin seemed positively guiltless judged against the
avaricious scheming of Bevan’s Angelina. She is “no unhappy maid” as she
reminded the solicitous chorus and her faux histrionic appeals for
compensation, “I love him, I love him!”, and hyperactive hyperventilating
had their desired effect on Neal Davies’ equally unprincipled Judge, who
vowed to ditch his ugly wife – married for her father’s wealth – and,
having fined Edwin, take the newly enriched Angelina for himself. Ross
Ramgobin, as Angelina’s Counsel, rivalled his client for thespian
extravagance, as he urged the jury to consider the misery inflicted not by
Angelina’s loss of a husband but by her financial forfeiture.

The goofery gushed along but, given that Gilbert’s lyrics are the
‘simplest’ – in diction and form – that he ever wrote for Sullivan, it’s a
pity that we didn’t hear more of them. The acoustic in the Theatre is good
but the patter largely defeated the cast. 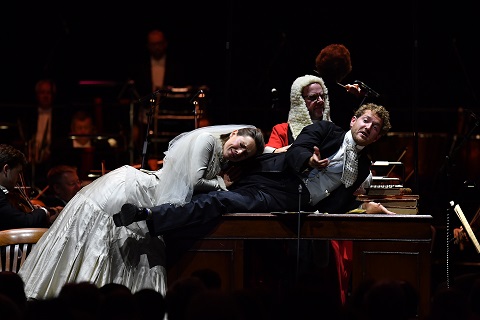 The first part of the Prom was devoted to overtures and songs that would
have found favour with the Palace’s first Victorian audiences. Glover
coaxed some vivacious playing from the BBC Concert Orchestra: woodwind
sparkled at the start of Sullivan’s Overture to Act 4 of The Tempest (1961-62), and here and in the Overture to Ethel
Smyth’s The Boatswain’s Mate (1913-14, rev. 1921) there was
plentiful melodrama and colour. Three movements from Parry’s incidental
music to The Birds (1883) proved less engaging, though there was
some delicate clarinet and horn playing to admire in the Intermezzo.

Bevan sang Alfred Cellier’s ‘All alone to my eerie … Whispering breeze’
with unaffected directness and sweetness, caressing the phrases gently, and
she was beautifully complemented and balanced by some sensitive string
playing. The soprano was joined by Sam Furness for a beguiling rendition of
Stanford’s ‘So it’s kisses you’re craving’, which balanced musical charm
with dramatic causticity. Neal Davies was no more successful in the Lord
Chancellor’s party piece from Iolanthe, ‘When I Went to the Bar’,
than he was in the Learned Judge’s subsequent and similarly named, ‘When I,
good friends, was called to the bar’. At least in the latter a context had
been established for the Judge’s conceited and corrupt self-praise, but the Iolanthe number came and went in a blink of an eye, so swift was
the tempo set by Glover. Though, after Davies’ first two garbed lines, she
tried to put on the brakes, the damage was done, and it didn’t help that
Davies’ eyes were rather glued to his word-sheet.

The best vocal item was Furness’s ardent rendition of Samuel
Coleridge-Taylor’s ‘Onaway! Awake Beloved!’, in which warm horns and
strings established a restful bed of sound from which Furness could assail
the melodic peaks with assurance and strength. Here we could hear every
word, and the earnestness of the sentiments was touching rather than
cloying.

By the end of the nineteenth century, the Ally Pally was both a white
elephant and economic millstone. But, it did and does represent a
powerfully persuasive emblem of Victorian aspiration and culture. The
success of Trial by Jury encouraged Gilbert, Sullivan and Richard
D’Oyly Carte to form, in 1876, the company which would present the
collaborations of the Victorian age’s most celebrated comic writer and
composer. At the start of the twentieth-first century, the majestic
exterior of the Palace, the tastefully distressed interior of the Theatre
the spacious majesty of the glass-domed East Court which forms an
impressively capacious ante-room still cast a spell. Let’s hope that the
magic results in both uplifting entertainment and economic success in the
years to come.

See Paul Watt, Alison Rabinovici, ‘Alexandra Palace: Music,
Leisure, and the Cultivation of “Higher Civilization” in the Late
Nineteenth Century’, Music and Letters, Volume 95, Issue
2, 1 May 2014: 183-212, for a detailed account of the origins,
development and history of the Palace.