Director Deborah Warner, whose production of Billy Budd (a
co-production with Madrid’s

and Rome Opera) is the first for twenty years to grace the stage of the
Royal Opera House, seems to be in accord with the views that Benjamin
Britten expressed in a 1960 radio interview. For, it is Vere’s moral
dilemma which dominates her interpretation. She makes no attempt to, as
Britten’s librettist E.M. Forster put it in The Griffin in 1951,
‘tidy up Vere’: ‘We (Eric Crozier and I) have, you see, plumped for Billy
as a hero and for Claggart as naturally depraved, and we have ventured to
tidy up Vere’. In Warner’s production, Toby Spence’s Vere is undoubtedly
“lost on the infinite sea”.

Michael Levine’s quasi-abstract design and Jean Kalman’s atmospheric
lighting emphasise this. The sea is metaphoric. Forster had written to
Britten, with striking prescience, ‘I will not recall you to the sea. Much
as I love it, I believe that you ought to postpone it until you can create
an old-man’s sea. Anyhow much later in your career’.

Here, platforms rise and fall (presumably intermittently obstructing the
view of those seated in the upper ‘decks’ of the House) and the sea is
evoked only by a trough of water across the centre of the stage (again,
presumably not visible to patrons in the stalls) through which shipmen
stomp and splash, to little evident purpose – Alasdair Elliott’s Squeak
seems particularly partial to a paddle. Although there are nautical
emblems, and we climb up to the mizzen-top and down into the ship’s
underbelly, Levine and Warner make us imagine the expanse of ocean on which The Indomitable drifts and we sail instead through the mists and
tidal surges of a psychological seascape. As Britten’s designer, John
Piper, had urged, ‘We must never forget that the whole thing is taking
place in Vere’s mind, and is being recalled by him”.

The criss-cross of ropes, rigging and ladders that pattern the ROH stage
suggest not just the regimented discipline of naval life but the net which
entraps Vere, Claggart and Budd – even the Novice, who laments, “Oh, why
was I ever born? Why? It’s fate, it’s fate. I’ve no choice. Everything’s
fate.” And, Vere might plead, “O for the light, the clear light of Heaven”,
but Kalman’s hazy, grey hinterland offers no illumination. We are adrift.
The costumes, too, blur and confuse: if the design evokes a late
eighteenth-century frigate, then ChloÈ Obolensky’s naval uniforms refer to
the Second World War, and I’m not sure what is gained by simultaneously
intimating ‘modern’ times and post-Revolutionary France. 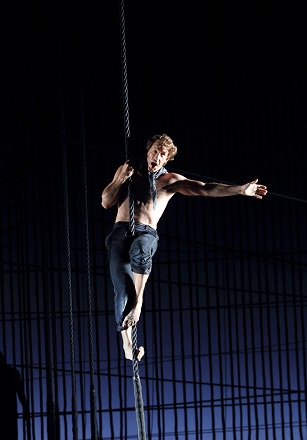 Moreover, although Kim Brandstrup deftly choreographs the crew’s work and
leisure – the ROH Chorus, who sang with stirring passion, are supplemented
a thirty-strong group of actors – there is little sense of actual
‘movement’. In the opening moments, the sailors’ work-cry, “O heave! O
heave away”, sees them on their knees, scouring the deck with holystones
rather than tugging the ropes and rigging. They remain unmoved by Billy’s
rallying summons, “Sway!”, and there is no sense of the integrative force
that binds the men and which later erupts during the pursuit of the French
frigate – here, despite the surging violence in the score, an episode which
fails to evoke vigorous anticipation of victory – and after Billy’s
hanging, when the crew reprise his unintentionally seditious farewell to
his former ship, The Rights O’ Man, the ‘heave’ motif returning as
a mutinous, threatening undercurrent. Kalman’s lighting emphasises the
motionlessness, confining Vere to his cabin and the men to their hammocks
in the hull. 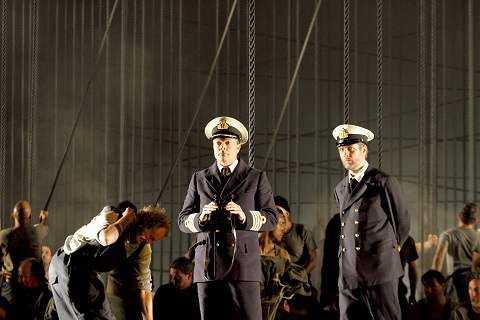 The homoerotic sub-currents of both Melville’s novella and Forster’s
libretto remain submerged in Warner’s production, and it is the opera’s
religious allegory which is brought to the fore. There’s no doubting the
answer to Vere’s desperate questions in the Prologue: “Who has blessed me?
Who has saved me?” Just as Warner, in interview, described Claggart as a
“fallen angel”, so this Billy is unambiguously seraph-like. Forster noted
(in The Griffin) that some critics had surmised that Billy’s
‘almost feminine beauty’ and ‘the absence of sexual convulsion at his
hanging’ indicate that Melville intended him as a ‘priest-like saviour’,
but while he professed to have striven to emphasise Billy’s masculinity and
‘adolescent roughness’, Forster couldn’t resist portraying Billy’s hanging
as a Christ-like sacrifice. And, Warner follows his lead, most strikingly
during the ‘hidden’ interview between Vere and Billy before the sentencing.
For, though Britten and Forster followed Melville – ‘Beyond the
communication of the sentence, what took place at this interview was never
known.’ – in this production the interview does not take place behind
locked doors. As the orchestral ‘interview chords’ unfold, Billy moves to
the rear of Vere’s private quarters; when he is sent down into the hold by
the conscience-wracked Vere, Billy places a palm on his Captain’s forehead
– an unequivocal gesture of compassion and clemency. But, while scholars
have essayed various affirmative interpretations of the chords’ exposition
of the opera’s essential conflicts, their ‘meaning’ inevitably remains
obscure, just as the secrets of the locked room surely must remain
undisclosed. The power of the chords is emotional, not rational. As Vere
himself says, “I must not too closely consider these mysteries. As
mysteries let them remain.” 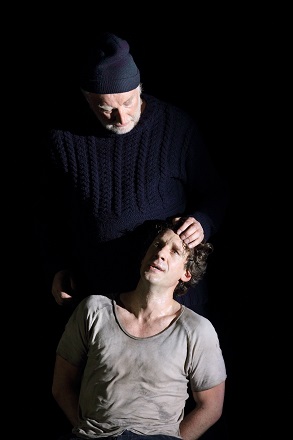 Toby Spence may look rather too youthful to embody the “old man who has
experienced much” who presents himself before us in the Prologue – here an
‘aged’ double sat stage-left, scouring the deck, perhaps in an attempt to
erase past ‘sins’ – but he captured Vere’s dreamy self-absorption and lack
of self-knowledge, shaping phrases and text with care and insight. This
Vere retreats from the realities of life aboard a war-ship to read
philosophy in his bath-tub, hosts his officers in his cabin while attired
in his dressing-gown, and rolls up the carpet to lie down so that he can
enjoy the sound of his men singing in their hammocks below: “Where there is
happiness there cannot be harm,” he declares, evading his crew’s discontent
through self-delusion. Warner’s direction frequently pushed Spence to the
rear of the stage, and his light tenor did not always carry with sufficient
weight, though Britten’s scoring helped him in the more declamatory
outbursts.

Indeed, this ‘Starry Vere’ seemed remarkably remote from his men. It’s hard
to imagine that he would inspire loyalty and love of the intensity which
drives Billy to vow, “I’ll look after you my best. I’d die for you – so
would they all.” Introspection characterises Spence’s Vere; I was not
convinced that he was, as Forster and Melville emphasise, ever aware of his
duties as a ‘King’ aboard the Indomitable, the upholder of God’s
laws, charged with maintaining cohesion and stability. Such professional
responsibilities influence Vere’s actions during the trial scene, but
Warner emphasises instead the personal dimension: the three officers –
Flint (David Soar), Redburn (Thomas Oliemans) and Ratcliffe (Peter Kellner)
seem both shocked and disappointed by Vere’s refusal to save Billy, and
thus it is his personal anguish which is foregrounded, and separated from
the pressures and tensions of life on-board a ‘floating prison’.

Jacques Imbrailo’s Billy Budd has become well-known to us now, since he
first sung the role at

in 2010. Imbrailo, as always, performed with physical and vocal
muscularity, hauling himself up a rope with impressive strength to bid
goodbye to his former ship, effortlessly flooring Squeak in a vicious cabin
scuffle, lashing out impulsively at Claggart. If initially his baritone
lacked a little of the golden gleam that shines from Billy, then the slight
ruggedness of tone was put to excellent effect during Billy’s reflections
‘in the Darbies’; this was a beautifully modulated and deeply moving
expression of understanding, forgiveness and vision. 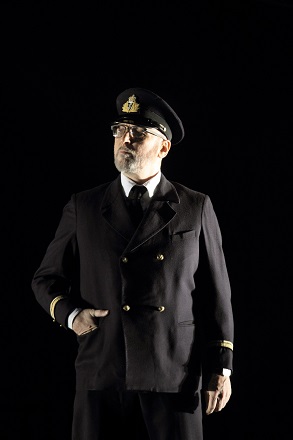 Brindley Sherratt’s portrait of Claggart was nuanced and chilling. His
Credo was a high-point: one could feel the forces struggling for control of
Claggart’s psyche. As Forster said, ‘Claggart gets no kick out of evil as
Iago did’, and Claggart tempered menace with melancholy, violence with
vulnerability. Claggart’s wretchedness – “O beauty, O handsomeness,
goodness! would that I had never seen you” – is deepened by the staging
which places the master-at-arms on an upper deck with the slumbering figure
of Billy huddled in a hammock below, illuminated by a shaft of light which
penetrates Claggart’s shield of darkness, exposing what Meville describes
as the master-at-arm’s ‘natural depravity’. 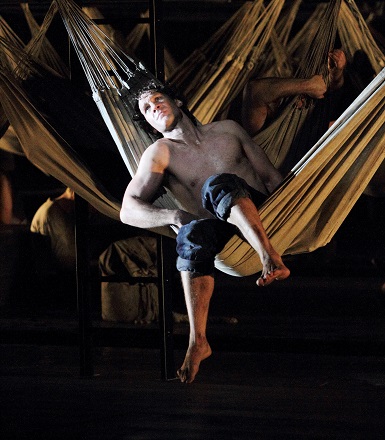 The cast was uniformly strong. Duncan Rock’s Donald made a strong
impression; Clive Bayley was a surly old sea-dog but revealed Dansker’s
true heart in Billy’s time of need. Sam Furness made much of the Novice’s
role, working hard with the text and communicating the young lad’s
ignorance and innocence. Furness sang the Novice’s Dirge with honest
feeling, as, encouraged by his caring friend (Dominic Sedgwick), he dragged
himself the full length of the deck, unable to walk or stand after his
flogging. Thomas Oliemans’ Mr Redburn was an authoritative figure, matched
for vocal sureness by David Soar’s Mr Flint and Alan Ewing’s sonorous
Bosun.

Conducted by Ivor Bolton, the ROH Orchestra were powerful in the climactic
passages of Britten’s score, but there was occasional discrepancy between
stage and pit.

In the Epilogue, Vere torments himself with accusations and questions – “I
could have saved him. […] O what have I done?” – but takes comfort from
Billy’s absolution: “He has saved me, and blessed me, and the love that
passes understanding has come to me.” Britten’s music, though, is
characteristically more equivocal. Vere professes to have sighted the
“far-shining sail” and to have “seen where she’s bound for”, but the
strength of Warner’s production lies in its ability to show us that the
light from heaven for which Vere longs will not separate good from evil;
that as Vere acknowledges “the good has never been perfect”; that, though
Vere has gained self-knowledge, the certainly of salvation remains elusive.

In, ‘Billy Budd on the Stage: An Early Discussion between
Producer and Designer’, Tempo, Autumn (1951), 21.