Jack has made his way into opera before – in Berg’s Lulu and
Phyllis Tate’s The Lodger but Bell and his librettist, Emma
Jenkins, have decided to tell the story from the point of view of the women
he murdered, and in doing so given us an opera with a strong moral bent –
rather closer to social commentary. Opera it may have been – with Jenkins
providing a beautifully poetic libretto, full of startling images which was
often at odds with the poverty and bleakness of the staging. But it also
felt as if it was a libretto which had been founded on the sociological
writing of the great French academic Emile Durkheim.

Problems surface quite early in this opera, and it primarily has to do with
Emma Jenkins’ essay in the program which sets out her views on womanhood in
Victorian London and what then actually happens in the opera. I found the
two often to be inconsistent. There is no Gothic horror – principally
because Jack the Ripper is a ghost, a presence only in name (or, is he?) –
but what is so surprising is that you don’t need Jack because the women
themselves are the perpetrators of their own violence. When Polly attempts
to steal from the sleeping women (in bare coffins laid out like cradles) a
fight breaks out – but it is Jenkins’s libretto, rather than the action on
stage, which seems to tell the story more effectively. Threats to ‘break
ragged teeth’ and a ‘raddled nose’ are brutal and matter-of-fact. Woken at
4am by Maud, the owner of the doss house, the women are sent out to sell
their bodies – while Maud attends to the small matter of an abortion in a
back-room. Maud’s ‘little parcel’ is the child Magpie, to be pimped out to
a corrupt police commissioner (the real Sir Charles Warren would have been
horrified by that indictment). But it’s the opera’s very lack of a
protagonist in Jack the Ripper which shifts the balance between male
oppression and violence to that of the women themselves which is the
weakness here.

And that oddly is where the opera begins to crawl. The narrative of Jack’s
murders are heard second-hand – either from the police telling us of them,
or from the forensic evidence describing it. You never see blood on stage,
but the libretto is so littered with the word ‘blood’ it might just as well
be drenched and soaked in red letters. A corpse on a pathologist’s table is
simply after the event (and why it’s charred I don’t know), and when the
women are heading towards their gruesome fate they leave their carpet bags
on a bare table, emptied out, as if they’re left-luggage. A broken,
half-shattered mirror becomes a kind of talisman. Shadowy, top-hatted
figures dressed in funereal black, like a Greek chorus, cart the dead women
off – rather like undertakers. These scenes perhaps lack sophistication
because they self-evidently work better in a medium other than opera; and
the formulaic narrative of the pathologist’s inquest is a backbone which
proved to have little spine. 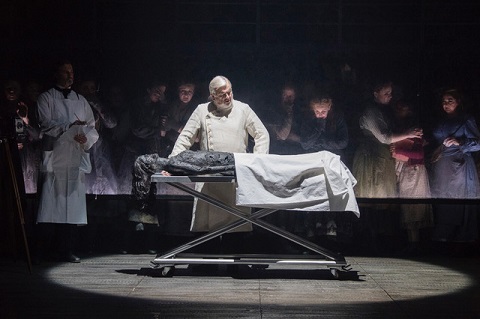 When the libretto shifts from what we know to be the coolness of fact to
the women challenging their vulnerability the opera often became
compelling. A problem with socialising the very subject matter of this work
– in the sense of placing it in the very context of a wider cultural,
economic and moral nexus – is that it often obscured the women at its
centre. Give them moments of tenderness and power and suddenly they become
much more human. Liz Stride’s monologue in Act II, for example, is defiant:
she sings of refusing to be gutted, of being strung up and swilled empty
like wine. You don’t entirely forget the image of the Hogarthian,
gin-swilling women propped drunkenly against walls, under street lights, or
slumped in street gutters – but it gives the impression of empowering women
if, ultimately, they become victims to the implied male violence.

Daniel Kramer’s direction of this opera is hugely claustrophobic, and it’s
almost suffocating to look at for long stretches. I think from what we know
of Whitechapel from the late nineteenth century this is probably an
accurate reflection – though the doss house feels rather more like a
Dickensian work house from Little Dorrit. A lot is left to the
imagination, which for some of us probably runs in opposing directions to
what was intended. In a sense the imagination is all one has because Soutra
Gilmour’s design is extraordinarily one-dimensional. It’s not so much
stripped bare as completely gutted – the shallow dugouts the women sleep in
more like graves – all that’s missing are the tombstones. The women watch
an autopsy on the first of Jack’s victims behind a glass pane –
disconnected, two worlds living within view of each other but emotionally
from very different perspectives.

I found huge chunks of the opera – and the production generally – to derive
much from operas elsewhere. Britten’s Peter Grimes hovers over The Women of Whitechapel like an unwelcome ghost. Squibby –
mistaken for Jack the Ripper because of his blood-soaked apron – and
falsely accused by a baying mob – ‘We want blood’ – comes straight out of Grimes; Bell’s violent, crushing music which comes to symbolise
the Ripper’s murders owes much to the music in Britten’s opera and Maud is
some monstrous hybrid borne out of Mrs Sedley and Strauss’s Clytemnestra.
There is an interesting “Letter Scene” in Act II, a device that goes back
to Offenbach and Mozart, but which here is sung as a duet, juxtaposing the
letter of Jack the Ripper’s cannibalism, his ‘From Hell’ letter, and one
being written to Queen Victoria pleading for her to do something about the
slums and the condition of the women who live on the streets. The contrast
between despair and hope couldn’t be more striking.

The casting of this production is absolutely first rate and redeems a
production which splinters too often. It is, of course, dominated by women
and it would be hard to imagine the roles of Jack’s victims – and that of
the capricious Maud – being better sung. In a sense, these are roles which
are ripe for some fleshing out – and mostly that is what we get. Janis
Kelly’s Polly is strongly sung, but you detect just the right amount of
grit in the voice as she is taken to her death. That perfect balance in the
voice is self-evident in Marie McLaughlin’s Annie Chapman as well – taken
too soon, perhaps. Lesley Garrett (Catherine Eddowes) and Susan Bullock
(Liz Stride) are magnificent in a comedy duet, swaggering, and loosened
with flasks of gin, before being Jack the Ripper’s double-kill. Bullock is
utterly memorable at the opening of Act II – reminiscing about her lover, a
fireman, and wearing his helmet, she not only looks like an East End
Br¸nnhilde but has the depth and range of voice to match. She can slump
against a wall, soaked to the gills with booze, and still somehow muster
the strength to sing of never being forced against the stable door against
her will by Jack. The Welsh soprano Natalya Romaniw is a dramatic and
wonderfully rich-toned Mary Kelly – the projection absolutely razor-sharp.
Perhaps of all the women Mary is the one with the most depth, and the one
requiring a soprano most able to look within her soul. Romaniw brings a
compassionate edge to her early scene where she reads of the Minotaur to
her daughter – but her most memorable singing (at least from a technical
point of view) is reserved for her final monologue at the end of the opera.
One might argue – indeed, one probably should – that the scene delivered
from a coffin on a hearse is simply prosaic and self-indulgent – but the
quality of Romaniw’s singing was extraordinarily fine. 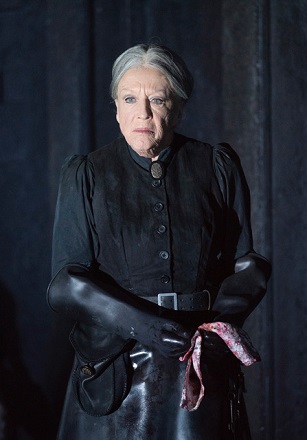 Josephine Barstow’s Maud is such an unlikeable figure – a depraved,
vice-ridden woman without any sense of moral worth – that it requires a
great singer to bring her off. She is as sinister as she is grotesque, a
Victorian abortionist so soaked in blood she is like the regicidal Queen of
Mycenae. Barstow’s voice has really lost none of its power at the top of
the register – and she easily strode over of the orchestra, like a great
albatross taking flight, in the final scene – and no matter how purely
disgusting the role may have been hers was an impressive achievement. If
the voice feels just a little compressed in the middle, the power behind it
remains formidable. By contrast, the much smaller male roles are almost the
very definition of compassion – there is a slightly perverse quality to
James Cleverton’s Photographer, a voyeur into exploitation undoubtedly, but
it’s a role that’s defined by a confusion of facts: what seems to be an
acknowledgement of guilt in photographs modelled on the Ripper’s violence
is actually the reverse, whereas Alex Otterburn’s beautifully sung and
gently characterised Squibby is harassed and attacked and implicated in the
murders because his apron is covered in blood when the opposite is the
case.

The choruses are excellent – the male chorus as onlookers peering into the
doss house, or with hands sliding through opened slats as if to grasp at
female body parts in a kind of anonymous sexual fumbling. The fact they
look identical is perhaps a mistake if you are looking to suggest all men
treat women this way; on the other hand, one could equally look at this
chorus as the very definition of Jack the Ripper himself in that it was
this very anonymity which made him the unidentified killer he was. He was
everyman, and no man. The female chorus are the Victorian women who are the
title of the opera – whether known because they were victims of Jack the
Ripper or victims because they weren’t. The ENO Orchestra under Martyn
Brabbins give an extraordinarily assured performance of a score which if
not exactly challenging on the ear, isn’t objectionable either.

The Women of Whitechapel
is an opera that can seem heavy on morality – no more so than at the end
which I found grating. It concludes as you might a fable – though Jenkins
really looks through frosted glass to see solutions to problems that the
opera only half confronts. The cast go far – and beyond – to such an extent
that I imagine any revival, or future production, of this opera will be
difficult to stage with different singers. It’s certainly flawed as an
opera, but the conviction of all involved made it an artistic, and musical,
achievement of a very high order.