In Rome there was but an excavated grave.
It was Canadian stage director Robert Carsen’s 2006 Lyric Opera of Chicago take on the ancient Orpheus legend as told by Virgil in his Georgics and then reimagined in 1762 Vienna by Christoph Willibald Ritter†von Gluck — these days simply called Gluck — as a one and one half hour azione teatrale.
Mr. Carsen revived his production of Gluck’s azione teatrale last November (2018) in Paris with famed French counter-tenor Philippe Jaroussky and French soprano Patricia Petibon, and just now (March 21) he staged it again in Rome with an all-Italian cast and conductor. Note that when Gluck refashioned his opera in French for 1774 Paris it became a full-blown drame hÈroique, OrphÈe was now a non-controversial haute-contre (a naturally high tenor voice) rather than a contralto castrato (a voice once disliked by the French), and of course Gluck added airs, choruses and dances to make a lengthier evening. 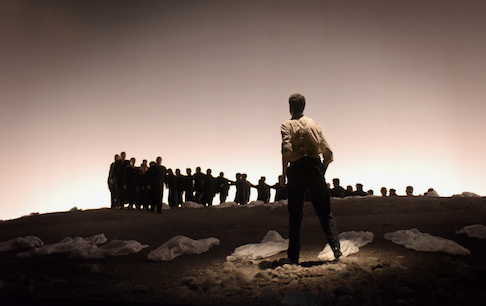 Carlo Vistoli as Orfeo with Act I mourners
Back in 1762 Vienna there were two brief dances in the drama — one by the infernal spirits, another by the Elysian spirits — and now in Rome (as well as Paris!) there were none. Robert Carsen’s stage was but a bed of pebbles, an excavated grave, a hand held bowl of fire and a sky. The black silhouettes of mourners bemoaning the death of Eurydice transformed themselves into barely visible, supine, white covered infernal spirits who slowly transformed themselves into black silhouetted blessed spirits, movement that sufficed to prolongate Gluck’s drama.
If there was actual dance in the Carsen Orfeo ed Euridice it was in the duet of Euridice’s escape from hell. Euridice, beautifully sung by Mariangela Sicilia, repeatedly implored Orfeo to place his loving gaze upon her, when he did not she turned away in dismay. Orfeo then faced the back of her head to beg her repeatedly to wait. She would not.
The emotional stillness of director Carsen’s bleak choral landscape was initially shattered by Orfeo’s thrice repeated,“Euridice” in a spine chilling cry by Italian counter-tenor Carlo Vistoli. Mr. Vistoli is the perfect swain — young, handsome, masculine, immaculately groomed musically, endowed with a beautiful contralto voice. Though Gluck’s arias for Orfeo were much simplified from the highly ornamented singing of the Baroque, Mr. Vistoli did not eschew adding the occasional appoggiatura. These chokes and sobs rendered his laments heart wrenching.
If conductor Gianluca Capuano normally conducts period instrument orchestras, in Rome he revelled in exploiting the resources of a modern symphonic ensemble (the Rome Opera orchestra) to create an immediacy that did not falter through the intermission-less duration. It was a close reading of Gluck’s score that left no emotive phrase unremarked, taking us to an emotional level that in fact betrayed Gluck’s intention to purge Baroque opera of its excesses. 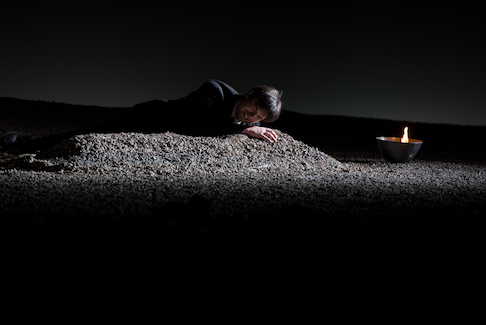 The great tension of Baroque opera is love vs. duty. It is indeed this same tension that pervades Gluck’s reform opera. It is Orfeo’s duty to not look at Euridice, and finally it is his love for Euridice that forces him to forsake his pledge, his passion overwhelming the art that had so moved the infernal spirits.
By the time we arrived, with Orfeo, to his “Che faro senza Euridice” we were all in a state of utter despair, Gluck’s azione teatrale having become an expressionistic nightmare.
Fortunately Gluck’s Amore, sung by Hungarian born, Italian formed soprano Emˆke Bar·th, saved the day reuniting Orfeo and Eurydice through the power of love, thus averting Orfeo’s suicide, indeed the mass suicide of all of us who, with Orfeo, had endured the tragedy of this splendid evening.
Michael Milenski