Et voil‡, one of the great evenings in the theater. And yes, it was not subtle.
Conductor Jordan immediately pounced on the musical tensions that structure late eighteenth century music and did not let go. The ensuing, unrelenting drama from the pit creating the antagonism between Giovanni and Leporello, with Leporello cruelly rubbing in Giovanni’s sexual exploits to Elvira, Masetto angrily snapping at Zerlina, Giovanni coldly setting up the ambush of Leporello.
Don Ottavio took resolute charge of the vengeance to come, Giovanni brutally beat-up Masetto. Donna Anna, horrified at her aggressor, selfishly cruel to Don Ottavio. Elvira doggedly chased Giovanni, Giovanni focused full determination to seduce the perfect woman. Leporello, finally losing all patience with Giovanni, picked up the Commendatore’s dinner table and threw it across the room. 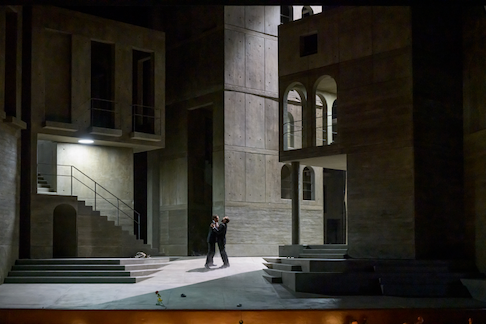 Don Giovanni and Leporello
Giovanni went straight into the seething hell that had been leaking steam through the stage floor from the downbeat of the overture. †
?
And, by the way, Mozart wanted three orchestras on the stage for the Act I finale. There they were, no room for much else, the country dance and the waltz chiming in with the minuet to create a quite Classical idea of cacophony to match the mess on stage.
This Don Giovanni is a gloves off release for all your pent up Don Giovanni hostilities. No wimpy Don Ottavio, no Freudian Donna Anna. No bumbling Masetto or cute Zerlina, no heroic or lonely or debauched Giovanni.
?
It was pure Mozart, and it was pure Don Giovanni, no questions asked.† 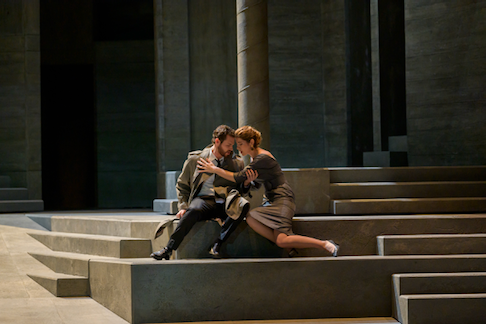 Philippe Sly as Leporello impersonating Don Giovanni, Nicole Car as Donna Elvira
To accomplish this musical and dramatic feat the OpÈra de Paris assembled a very handsome cast indeed of fine, beautifully voiced young singers who confronted one another face to face when not nose to nose. Giovanni tall, slim and bearded, Leporello tall, slim and bearded (no Act II suspension of disbelief necessary), Donna Anna obviously very worthy prey, Masetto wiry, sharp witted and energetic, the Commendatore towering in presence and in voice.
Thus it is no understatement to say the the evening was an orgy of Mozartian phrasing, maestro Jordan’s orchestra sharply defining the musical parameters, carving out strategic dramatic plains against which the vocal lines etched themselves. 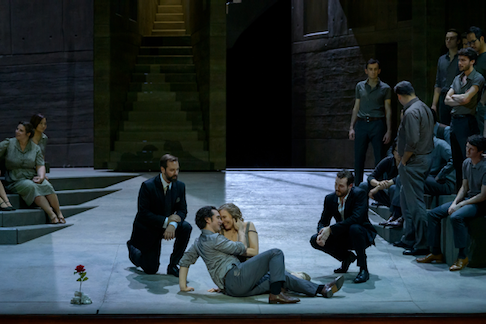 …tienne Dupuis as Don Giovanni, Mikhail Timoshenko as Masetto, Elsa Dreisig as Zerlina, Philippe Sly as Leporello
The unique colors of each of the voices defined its character — the suavity of the Don’s Act II serenade, the sophistication of Leporello’s “Madamina,” the narcissism of Donna Anna’s “Non mi dir,” the voluptuous of Donna Elvira’s “Mi tradi,” the confidence of Don Ottavio’s “Il mio tesoro”†(though sung partly in fetal position), the free and easy sexuality of Zerlina’s “Vedrai carino.”
With a virtuosity and sense of phrasing surely equal to the voices designer Jan Versweyveld lighted his concrete walls, pulling out components of its geometric shapes in light and dark grey based colors, save the saturated gold that flooded the stage for the masked trio “Protegga, il giusto cielo.” Designer Versweyveld served as well as the dramaturg of the production.
Stage director Ivo van Hove and conductor Philippe Jordan created a production that took Mozart’s masterpiece to its bare bones with a myriad of hidden sophistications. This Don Giovanni is a daring creation of great wit and profound sensitivity to Mozart’s masterpiece.
French bass-baritone Etienne Dupuis was Don Giovanni, Canadian bass-baritone Philippe Sly was Leporello. American soprano Jacuelyn Wagner was Donna Anna, Australian soprano Nicole Car was Elvira. French tenor Stanilas de Barbeyrac sang Don Ottavio. Russian Mikhail Timoshenko and Franco-Danish Elsa Dreisig were the Masetto and Zerlina. Estonian bass Ain Anger sang the Commendatore.
Opera and theater director Ivo van Hove directs Kurt Weill’s The Rise and Fall of the City of Mahagonny at the Aix Fesitival next month (July). Note that this Don Giovanni travels to the Metropolitan Opera next year. Conductor Philippe Jordan this summer again conducts the deconstructed Die Meistersinger at the Bayreuth Festival.
The understated, simple costuming for this production was created by An D’Huys, the impressive hell video was created by Christopher Ash.
I saw the fourth (June 21, 2019) of eleven performances.
Michael Milenski