Les Milles Endormis is a brilliant piece of real opera by Israeli composer Adam Maor and it was brilliantly staged by its librettist, Israeli poet Yonatan Levy. Four singers and eight instrumentalists (Luxembourg’s United Instruments of Lucilin) made a mighty noise — though insufficient to wake up the thousand imprisoned Palestinian hunger strikers the Israeli Prime Minister and his security chief had put to sleep not knowing what else to do with them.
We saw only about thirty of them laid out quite comfortably on the stage only they weren’t asleep as they were actually audience members, like us, watching the show (maybe the only seats they could get for this, the hit show of the Festival). 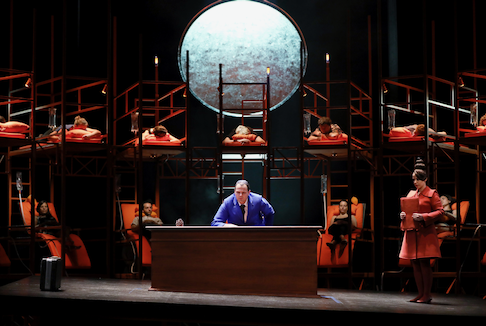 Tomasz Kumiega as the Prime Minister, Gan-ya Beb-gur Akseldrod as Nurit (extreme right) [photo copyright Patrick Berger / Artcompress, courtesy of the Aix Festival]
The U.S. president phoned the insomniac (with the rest of Israel) PM to say that he had not vetoed the UN resolution denying rainfall on Israel. Meanwhile Israeli children in the north were having epileptic seizures that left them speaking Arabic.
This provided occasion for the reading of a lengthly newspaper article describing the stricken toddlers. Though it wasn’t read. It was recited in an astonishing Hebrew prose aria by a Cantor wearing a crown of with faceted mirror fragments that ricocheted points of light among us adding even more magic to the Arabic infused musical lines.
The PM’s chronic nightmares are determined to be psychic tunnels dug into Jewish dreams by the sleeping terrorists. The Security Chief takes over, sending in a sleeper agent, the PM’s assistant, Nurit whom he hypnotises in a magical, mystical monologue. In an extended dream aria embellished with Arabic musical gestures, Nurit standing among us on a platform over the orchestra pit in the now lighted hall tells of the spiritual homeland the thousand sleeping souls have founded. It is one soul connecting to another.
This is but the surface of this brilliant, perfect bel canto libretto. The Prime Minister and his adjuncts create quite a mess, thus the PM has much to rage about. The Cantor, the Security Chief and the PM’s assistant Nurit are left to sing their way out of it. Though the subject of the opera may not be bel canto’s classical conflicts, the Mille Endormis’s conflict is indeed a current torment in our minds and hearts.
Like the Brecht/Weill Rise and Fall of the City of Mahagonny, Les Mille Endormis is heavy political satire. But unlike the Brecht/Weill piece it is first and foremost opera as revealed in its profoundly human, emotional resolution that eclipses its conflict.
Composer Maor’s orchestral score includes considerable use of recorded electronically produced sounds, created by the Centre Pompidou’s Ircam (an electro-acoustical music laboratory). The basic musical language is sonic gesture created, with the Ircam component, in the beautifully colored sounds of traditional orchestral instruments — a string trio with added bass viol plus a clarinet. Add to this an accordion and percussion, plus an electronic keyboard. The vocal lines are melodic (moving in steps rather than leaps). The lines are based on normal speech patterns embellished with the Arabic vocal gestures.
Holding all of this together musically was Swiss-Australian conductor Elena Schwarz. It was a conducting tour de force accomplished with visible precision and total command of the deceptively minuscule forces that may as well been those of a Bruckner symphony.
Polish baritone Tomasz Kumiega gave an over the top performance as the Prime Minister, finding his rage, his passiveness, his helplessness and his humanity. American bass David Salsbery Fry displayed a strange and surreal humanity in the black tones of magical incantation hypnotizing Nurit. French tenor Benjamin Alunni accomplished a monumental feat in delivering the huge newspaper account of the stricken children babbling in Arabic with detached cantorial aplomb. Israeli soprano Gan-ya Beb-gur Akselrod intoned the mesmerizing dream of the Israeli who joined the sleeping Palestinians in a world beyond hunger where there is no homeland.
The opera was performed in the small, horseshoe ThÈ‚tre du Jeu de Paume on Aix’s Rue de l’OpÈra. 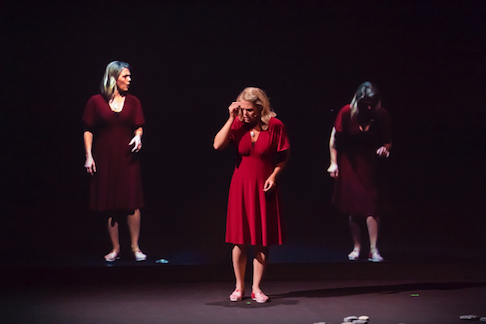 Miah Persson as the young mother in Michel van der Aa’s Blank Out [photo copyright Priska Ketterer – Lucerne Festival]
The hour long opera Blank Out was created by Dutch composer Michel van der Aa. It was first performed in 2015 under the auspices Pierre Audi’s Dutch National Opera who commissioned the piece. Among other stops before finding its way into the recital hall of Aix’s Darius Milhaud Conservatoire it was seen at Mr. Audi’s Park Avenue Armory in Manhattan.
Mr. van der Aa plays with electronic technology in his compositions for the stage (Blank Out is his fifth opera) which are both visual and auditory creations. Blank Out is scored for one live soprano and one recorded baritone on an accompanying van der Aa made video. The video is in 3D thus we were provided with the necessary glasses.
The opera’s gimmick is the presentation of a horrific domestic tragedy — the live-on-stage mother tells of watching her seven-year-old son drown, and later the filmed baritone re-experiences the drowning death of his mother. The artistic intent of Mr. van der Aa’s opera is not so much to operatically create such a shocking, mirrored tragedy as it is to demonstrate how current audiovisual creation and reproduction technology can be harnessed to tell stories. We were first wowed by the doubling of the live soprano on the 3D recorded video screen to make a duet with herself, then we were amazed by the quality of the recorded voice that fully matched the live soprano. And, voil‡, it became a trio with herself!
The fully electronic recorded score provided soundscapes where the mother moved to the side of the stage to manipulate a model of a house, the 3D film documenting her re-configurations of the model. It was this model house that we see become as well the real house of the baritone’s mother located on a barren, bleak stretch of sea land reclaimed by a Dutch dike. The video alternates between the recorded image of an actual (real) house and the recorded manipulations of the house model by the live soprano.
With all this going on in vivid, high definition color I struggled in vain to feel anything other than passing interest in the cleverly mirrored domestic tragedies. I did admire the technology, and the solid, if stolid storytelling.
The live soprano was sung by Swedish soprano Miah Persson, the same singer who created the opera’s premiere a few years ago (thus no need to make a new film). Mlle. Persson is a musician of high order, evidenced in the extended, pitch perfect a cappella singing that began the opera. Her pure sounds perfectly embodied the tentative emotions of this young mother, sounds that have made her a Mozart heroine on major stages. British baritone Roderick Williams was the recorded son, well portraying a mature male recalling and then again grieving the death of his mother.
The Aix Festival partnered with a nearby winery cum architectural art installations, Ch‚teau La Coste to exhibit Michel van der Aa’s 15 minute virtual reality piece Eight. As Blank Out its narrative is a gimmick. A virtual old woman traces her life in virtual physical re-creations backwards to her eighth year. Note that the shape 8 is a symbol of infinity and that once inside the 20-foot square paddock, capped with headset and earphones, we configured the shape of 8 with our footsteps as we followed our virtual guide, the age inverting female.
The sound tract is the recorded singing of poems and texts compiled by Mr. van der Aa and Australian pop songwriter-singer Kate Miller-Heidke who sings the texts in a weak and breathy, new-age-music voice to electronic accompaniment. The soundscape includes manipulated voices of the Netherlands Chamber Choir.
Virtual reality provided astonishing, infinite vistas, hurling boulders, and finally an intimate, low tent I dutifully squatted to enter where I watched and listened to a virtual eight-year-old girl earnestly telling me something or the other. Standing again I put my hand out to use a wall to steady myself. It was, however, virtual. As was the artistic experience. 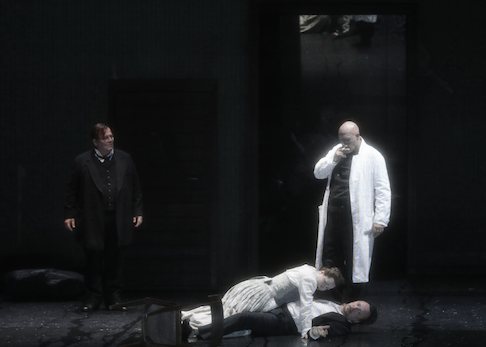 Wolfgang Bankl as Oberlin, John Daszak as Kaufmann, Georg Nigl as Lenz (on floor) with doll Friederike in Wolfgang Rihm’s Jakob Lenz [photo copyright Patrick Berger / Artcompress, courtesy of the Aix Festival]
German composer Wolfgang Rihm’s 1978 one-hour-fifteen-minute chamber Jakob Lenz was given three performances in Aix’s Grand ThÈ‚tre de Provence in a major, i.e. great big 2014 production from the Stuttgart Opera.
This Rihm opera completes a trilogy of operas based on the literary works of the German Romantic expressionist Georg B˚chner— Alban Berg’s 1925 Wozzeck, Gottfried von Einem’s 1947 Dantons Tod (The Death of Danton), and the 1978 Rihm Jakob Lenz. Dantons Tod had a major revival at the Vienna State Opera last year. This 2014 production of Jakob Lenz evidently stimulated a revival of interest in composer Rihm, now 67 years-old, as the Salzburg Festival revived his The Conquest of Mexico a year later in a splendid production of rich metaphor by Peter Konwitschny.
Though B˚chner’s Lenz is a novella based on Jakob Lenz’s diary, the Rihm Jakob Lenz librettist, Michael Frˆhling configured it ‡ la Wozzeck as 13 short scenes wherein Goethe’s friend, the schizophrenic, strum und drang poet Jakob Lenz is found, half drowned by the parson Oberlin. He takes Lenz to the parsonage with him. Lenz has visions of his beloved Friederike and engages with his friend Kaufmann in a discussion about art. Lenz hears voices that tell him Friederike is going to die, he searches for her only to find an infant on a bed whom he sees as Friederike. He tells her to rise. She doesn’t. He hears voices that tell him to suicide. Oberlin and Kaufmann are powerless to help Lenz. The place him in a straight-jacket. Left alone on the stage he repeats the word ”logical.”
Composed when Rihm was twenty-six years old Jakob Lenz is a neo-expressionist statement, very much in the mold of Wozzeck though without its dramatic and musical interest. The Stuttgart production by venerable German theater director Andrea Breth is in the stratospheric teutonic theatrical mannerisms of unvarnished, ugly reality that typify the German long-ago avantgarde. Here in Aix they read as naive, a language befitting a retro staging of Wozzeck.
The opera Jakob Lenz’s opening image was the poet Lenz falling from the stage loft onto the stage floor (enacted by a acrobat double). It was spectacular, but we were then held captive for the monochromatic duration of the opera. Austrian baritone Georg Nigl sang Lenz, Austrian baritone Wolfgang Bankl sang Parson Oberlin and English tenor John Daszak sang Kaufmann. German conductor Ingo Metzmacher conducted eleven members of Frankfurt’s Ensemble Modern.
Michael Milenski