Currently showing at the Museum is a fantastic special exhibition, Two Last Nights! Show Business in Georgian Britain, which opens a
window on the often riotous and raucous goings-on both front-of-house and
behind-the-scenes in the eighteenth-century theatre and opera house,
through exhibits such as fans printed with seating-plans to show where the
great and good could be found, large illustrated tickets which are works of
art in themselves, sharp contemporary cartoons and over-crowded playbills.

The latter are astonishing, showing the extent and diversity of the variety
and vaudeville, sketches and song on offer each long evening of
entertainment. A similar bill in the Burney Collection at the British
Library gives the flavour: at the King’s Street Theatre in Bristol on the
evening of 23rd August 1775, theatre-goers could enjoy
Goldsmith’s She Stoops to Conquer, before which they were treated
to a Prelude written by one George Colman Esq., while the play was followed
by a ‘New Dance to which will be added A New Dramatic Entertainment, The
Maid of the Oaks’, concluding with a FÍte champÍtre – illuminated with
‘near one thousand lamps’ original songs and choruses, a new minuet. The
whole evening concluding with a dance. Preludes and after-pieces,
divertissements and dances, comedies, dramatic romances, tragedies and
farce frequently collided. Not surprising, Hogarth’s pen skewered both the
artistes and the players, the aristocrats and the plebs.

I justify this rather diversionary preamble to my review of Music Theatre
Wales’ production of The Intelligence Park at the ROH’s Linbury
Theatre because Gerald Barry’s first opera resembles such a marathon
Baroque bombardment. Both Hogarth and Handel, the latter whom Barry
professes to admire, were fervent supporters of the Foundling Hospital
Chapel – from 1749 Handel gave an annual benefit concert, raising thousands
of pounds for the Hospital – and Barry channels Hogarth in his
metatheatrical mash-up, though with little of the neoclassical wit and
precision, tempered by soul-touching lyrical sentiment, that Stravinsky
demonstrates in The Rake’s Progress. Instead Barry wields an
iconoclastic sledgehammer, bludgeoning all connections between sound and
syntax that might provide structural and semantic coherence … or, at least
a semblance of comprehensibility. 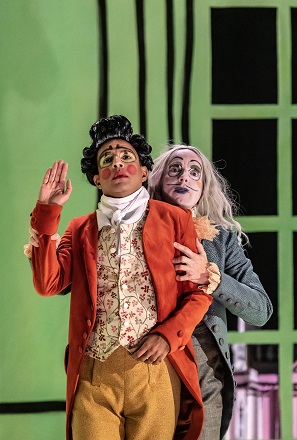 But, then, Barry’s not in the business of ‘coherence’. In the sleeve notes
to the 2005

of the first production of The Intelligence Park at the Almeida
Theatre in July 1991 (which was broadcast on BBC Radio 3), Barry professes
not to like ‘texts which are bound by logic or plot’, preferring instead
those, such as that by his librettist Vincent Deane, characterised by
‘coolness and a bizarre artificiality which allow extreme careering at
tangents’.

In fact, the essential plot and the ‘opera-about-opera’ paradigm of The Intelligence Park are pretty straightforward, it’s the idiom
and execution which scramble reason and rationality. The time is 1753, the
place Dublin. Robert Paradies has composer’s block and is struggling to
complete his new opera. Marriage to his fiancÈe, Jerusha Cramer, will bring
him her bombastic father’s money, and the leisure to devote himself to his
art. But, he’s obsessed with the castrato Serafino, who is Jerusha’s
singing teacher. Worse still teacher and pupil elope. The plus side is that
Paradies infatuation fuels his musical inspiration; the downside is that
Serafino and Jerusha transmute into Wattle and Daub who find their way into
his opera. As real and imagined become inextricably tied up in creative and
romantic knots, Paradies loses his grip. 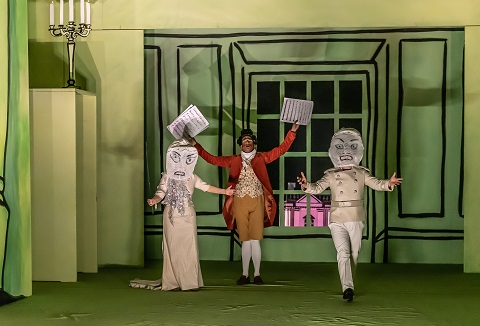 As a metareferential document of a creative crisis, The Intelligence Park is not, in theory, so different from Franz
Schreker’s penultimate opera,Christophorus oder ‘Die Vision einer Oper’ ( St Christopher, or ‘The Vision of an Opera, 1924-29). Barry,
though, sets out to destroy any conduit through which intelligibility might
be communicated. The vocal lines deliberate disrupt syntax and meaning,
through rhythmic fracture, elongation and hysterical stuttering, and
through melodic and registral displacement and athletic angularity. The
singers are required to essay vocal gymnastics, with the male roles leaping
between falsetto and Hadean depths. If the word-setting is not so much
arbitrary as deliberately anarchic, then the prevailing fortissimo
wind-brass dominated accompaniment of punching patterns of repetitive
staccatos obliterates the text in any case. In the Linbury Theatre I could
detect scarcely a word of Deane’s 18th-century linguistic style-games,
which are themselves intercut with splashes of Italian, and was forced to
choose between gazing up at the oh-so-high surtitles to learn what was
being said or looking at the stage itself to try to work out what was going
on. Neither course of action produced a satisfying result. 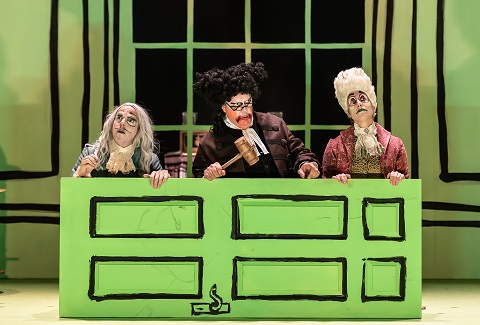 There is no danger of music and words coming together in any ‘meaningful’
relationship; indeed, they are surely designed to be in combat. Each
theatrical element does battle with every other aspect of the ‘drama’ and
the result is a frenetic but self-consuming energy which burns itself to
obliteration on a bonfire of the bizarre. Director-designer Nigel Lowery’s
toy theatre-style painted sets are imaginative and eye-catching. But Lowery
substitutes excess for elucidation: smeared clown make-up, outsize
Aristophanic head masks, manic stage business – all seems designed to
obscure rather than to explicate. 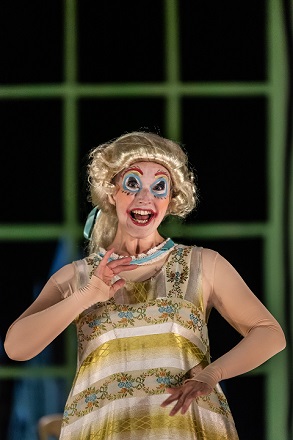 The cast, however, give their all. It was announced at the start that
Michel de Souza was unwell, and surely by the end he must have felt truly
dreadful having been asked to force his voice high and low, and generally
swallow and strangle sound and syllable. As he companion D’Esperaudieu,
Adrian Dwyer was more successful than most in communicating if not meaning
then at least words, and he and Rhian Lois as Jerusha were able to produce
a focused tone which could carry about the tumult and communicate with some
directness. Not so Patrick Terry, as Serafino, who, despite a
characteristically committed and game performance was often inaudible.
Stephen Richardson threw himself about the stage and his voice in all
directions as Sir Joseph Cramer; Stephanie Marshall completed the dedicated
cast. Raphael Flutter’s solo treble was transmitted in recorded form via
the bobbing heads of the grotesque putti slouching on the columns of the
theatre-within-a-theatre set. Conductor Jessica Cottis guided the London
Sinfonietta confidently but when she joined the cast on stage for the
curtain-call she looked exhausted, only tentatively allowing herself what seemed a
relieved smile. 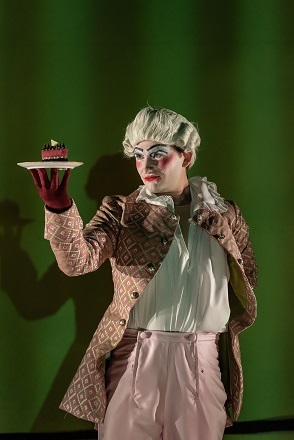 Paradies’ opera audience – who prefer card games and gastronomic cuisine to
genuine ‘culture’ – formed a row of rubbery double-headed Francis
Bacon-inspired Dummies: I guess this was ‘us’. But, if The Intelligence Park is an opera about unfulfilled creativity,
then I wondered just whose creativity was under the spotlight. Some commentators have described Barry as a ‘visionary’. I found
his fantastic, frantic pastiche tedious: thinking of Birtwistle’s Punch and Judy, or imagining what AdËs might do with this conceit,
made it hard to discern just what ‘vision’ it was that Barry was supposed
to have had. 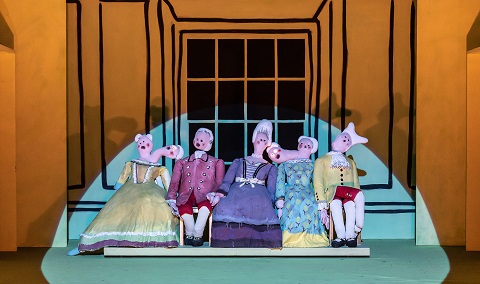 Admittedly, I was no fan of the composer’s 2011 opera


The Importance of Being Earnest
, which won widespread acclaim, but in that case Wilde’s perfectly
well-made play was able to withstand Barry’s rough treatment. On this
occasion, I began to wish that the Grim Reaper who haunted the production
with increasing frequency would wield his scythe on proceedings. That said,
there were plenty in the Linbury who voiced their praise vigorously at the
close. Visionary or Emperor-with-no-clothes?