Gossip has it that Bologna’s 1871 Lohengrin was the first Wagner opera to be heard in Italy because Giuseppe Verdi did not engage the Teatro Comunale’s principle conductor Angelo Mariani to conduct the premiere of Aida in Cairo, and furthermore that Verdi had encouraged star soprano Teresa Stolz, Mariani’s lover, to leave him. Thus Mariani wreaked revenge on Verdi by bringing Verdi’s archival into Italy! Verdi did attend one of the performances of Lohengrin, and later wrote to his publisher that it made him want to throw up. It is rumored that Teresa Stolz then became Verdi’s mistress.?
Tannhauser was programmed in Bologna the following year, 1872 the year Wagner accepted honorary citizenship of Bologna! Rienzi came in 1876 and Dutchman in 1877. The Teatro Comunale gave the Italian premiere of Tristan und Isolde in 1888. This 2020 production of Tristan is the twelfth in the Teatro Comunale’s history. The stage director of the 1983 third last version situated the opera in the Otto Wesendonk living room [his wife Mathilde a Wagner lover and muse], stage director Ruth Berghaus set the 1996 penultimate version on a space station.?
Surely taken right in stride by the Bolognese this 2020 version occurs within a work of art, an installation that surely would be most at home in hip, chic, intellectual Berlin. Stage director Ralf Pleger and his designer Alexander Polzin are numbingly credentialed within the film/art/opera avant-garde establishment.? 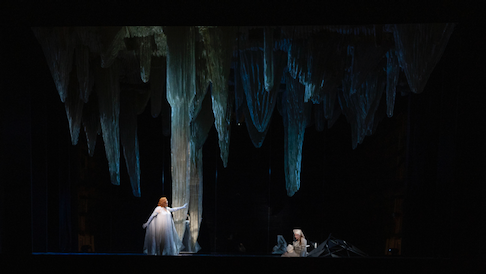 Act I
The first act was in a maze of slowly, very slowly descending stalactites that illuminated, lightning-like, from within at that crucial moment, the second act was a huge revolving tumbleweed-like sculpture from which oozed white worms (dancers) in crucial moments in Wagner’s love death enactment. The third act was a highly abstracted starry sky back wall that in the considerable magic of the lighting effected by John Torres sometimes appeared as a ceiling that was a floor, and at that crucial moment the wall moved in toto, somehow, startlingly forward.? 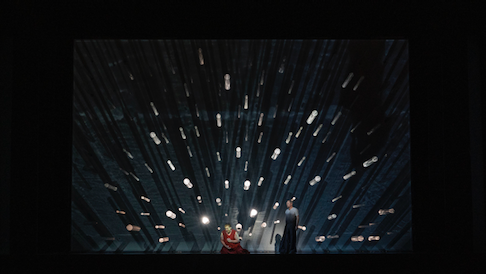 Act III
There was no action. No one drank the magic potion, the lovers never touched much less looked at one another except in rare, very rare strategic moments, Isolde did not even glance at the dead Tristan, Melot’s spear did not wound Tristan or kill Kurvenal. There was no action. None.
?It was spectacular, never mind whatever philosophical underpinnings or artistic intuitions one may conjure (director Pleger suggests it as a drug trip). It was abstract art as image in music. It was not drama in music.?
Musically Wagner’s opera soared within these images, conductor Val?uha finding surpassing warmth and an astounding intimacy from the Teatro Comunale’s splendid orchestra, the winds and brasses singing in tones of purest color, the tempos in spontaneous and natural unison with the text declamation and the progression of images. There was no drama, no musical trauma in Mo. Val?uha’s exposition of this Wagnerian rite.?
German tenor Stefab Vinke was Tristan. Mr. Vinke began as a light lyric dramatic tenor (jugendlicher heldontenor), later adding all the Wagner heldon tenor roles to his repertoire. It was reported that he tired though the trials of Siegfried in the recent Metropolitan Opera Ring, and here there seemed to be a moment of distress in the second act love duet. But for the murderous third act monologue he was in superb voice to his death, riveting us as an image of wounded suffering in a red tunic, finally trailed by six dancers in red tunics to create a swirling red line.
King Mark was sung by German bass baritone Albert Dohmen, a formidable Bayreuth Wotan. Of imposing presence Mr. Dohmen stated the case of the betrayed king in absolute clarity and exquisite dignity, adding occasional portamento (sliding tone) in his attack of a phrase to startling vocal effect. Russian mezzo soprano Ekaterina Gubanova provided the Brang?ne in gorgeous, present voice throughout, her second act warning ”Einsam wachend in der Nacht” was one of the evening’s most beautiful moments as she hung on the turning sculpture bathed in golden light. Tristan’s squire Kurvenal was sung by German baritone Martin Gantner who infused his sympathetic evening-long presence with Tristan in warmly focused voice.
The production’s Isolde was 54 year-old Danish soprano Ann Petersen. Mme Petersen produces a mighty tone that she manages with little nuance. She is an accomplished veteran of the role and thus delivered a performance that was generic though sufficient for us to understand and enjoy composer Wagner and stage director Pleger’s intentions.
Michael Milenski