Just now San Francisco Opera has presented Arrigo Boito’s Mefistofele, in a 25 year old production by Canadian stage director Robert Carsen who was 34 years old at its premiere in Geneva in 1988. Carsen’s production, designed by Michael Levine (who was 27 years old back in 1988), is brilliantly witty. Maybe its racy titillations (bared female breasts and exposed male genitalia) were racier back in the ’80’s than they are now but they still brightly illuminate Mefistofele as one of opera’s more bizarre artifacts.
What the Carsen production did not have at its 1989 premiere in San Francisco was conductor Nicola Luisotti whose exuberant showmanship and spectacular musical making have found, finally, an opera production that is their match. It is no secret that the glories of the Luisotti pit frequently dwarf what is on the stage in San Francisco, or more often ignore the intentions of the stage, meager may they be these days. Here however the Boito, Carsen and Luisotti collaboration was one clearly envisioned in heaven.
The 1860’s were heady times in Paris and Milan, Offenbach was at the peak of his fame making fun of both love and antiquity sparing, strangely, religion. In Milan however there were a few outrageous poets (messy haired ones) who took on anything sacred to the Italians, be it personal appearance, God or Goethe. One of them (these scapigliature) was Arrigo Boito, 26 years old in 1868, who deftly extracted a few passages from the bible of bourgeois Romanticism, i.e. Goethe’s Faust and construed them to cruelly satirize nineteenth century self-fulfillment aspirations. 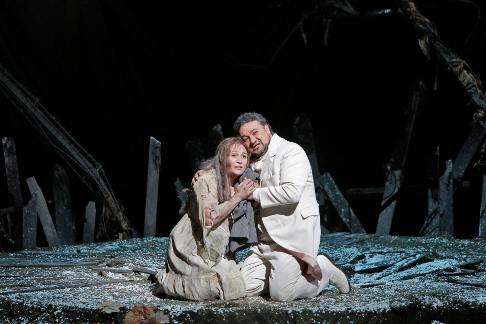 Patricia Racette as Margherita and RamÛn Vargas as Faust
These were not modest times operatically — Verdi’s Don Carlo comes in 1867. The fully developed 19th century Italian sound was widespread as evidenced by the many composers who contributed to the Messa per Rossini (1869). A man of letters and a man of his times Boito could write music as well as librettos. The operas Mefistofele and Nerone are his musical legacy. Their style is typically Italian of the period, warmed somewhat with oltralpe sonorities (beyond the Alps means Wagnerian, a dirty word in Italy just then). It is good music.
Obviously Boito’s Mefistofele is massive, given it addresses the always important struggles of good and evil. God and the Devil confront one another, Faust is in between, Marguerite is pathetic and Helen of Troy is untouchable. Robert Carsen manages all this with enough supernumeraries to turn a village fair into a Chinese New Year of the Snake running amok in the Garden of Eden, a huge chorus of nymphs and satyrs is unleashed into an out-of-control bacchanal, and a pristine ballet revels to the beauty of classical architecture shining in an hyper elaborated harp solo. All of this overseen by a massive chorus of heavenly angels who are joined by legions of cherubim at the moments when the glory of God rises to its utmost clamor.
Needless to say everyone has a very good time, most of all maestro Luisotti who can unleash the forces of heaven themselves in massive choirs of praise as well as confront God with outright derision — those two piccolos screaming over the orchestra were only some of the whistles you heard (the fischio [whistle] is obvious derision in Italy), the rest were real. In spite of being condemned to death even poor Marguerite has a good time — her aria is one of the splendors of the soprano repertory. It was in fact an exquisite duet with the maestro, the diva in quite fine voice at the third performance.
Carsen’s indulgence of affection for Boito’s youthful escapade was sweetened by the casting of Mexican tenor Ramon Vargas as Faust. His is a voice of great beauty still most at home in the light lyric repertory (he was San Francisco’s Nemorino). At 53 years of age Vargas now takes on heavier roles, like Boito’s Faust as well as Gustavo III in Un ballo in maschera last summer at Orange. Here he sang with consummate style and musicianship, and with the maestro made a quite moving declaration of love to Helen. Nonetheless he remains a miniature tenor for the big repertory and therefore could perfectly embody a pretend Romantic hero caught up in all this fun.
Much the same can be said for the Mefistofele of Russian bass Ildar Abdrazakov. He gave a maximally effective performance, vocally and histrionically. In fact Mr. Abdrazakov was absolutely adorable as a pretend villain whose sole purpose is to give rise to lots of fortissimo music. While it surely was expedient to cast Adler Fellow Marina Harris as Helen of Troy it was not appropriate. However fine a young singer may be it is rare that an Adler Fellow may have the presence, personality and experience to hold the stage in a major role. After all, San Francisco Opera boasts that it performs on the international level. Or does it?
The Robert Carsen/Michael Levine production is huge, and hugely fun. It is a masterpiece that was well worth reviving. If you miss it just now in San Francisco you can catch it at the Met in 2015 (conductor and cast not yet announced). And, uhm, it was anything but cheap to get this production back on the stage after twenty five years of travel.
Michael Milenski