There were in fact two just now in the OpÈra de Lyon remounting of its 2005 production of Hoffmann, both collective hitches.

Not only has Mr. Pelly created a figurative nightmare, he has created a technical nightmare as well. The usual four sets — the tavern, the workshop, the bedroom, the salon — morph into thirty or forty or so scenes, a seemingly countless progression of scenic moments that evolve through the unfolding of Hoffmann’s narration in dream form. And the dream is a bad one in which the macabre surreal is suspended in abstract, dark space.

The Pelly concept is complex indeed. Not for a moment does Pelly allow us to forget that human motivations push the bizarre psychological and philosophical impulses of E.T.A. Hoffmann’s morbid tales. He accomplishes this by making us watch smart, strong stagehands push and pull walls and platforms and operate machines that transport Pelly’s phantoms through the dream world he has created for Offenbach’s opera. 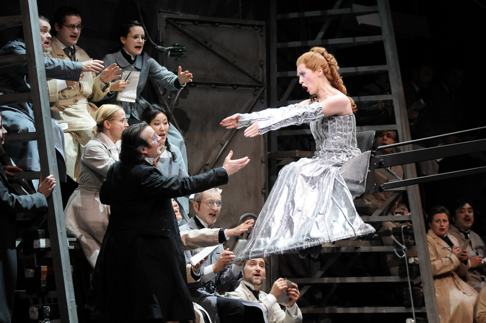 Offenbach never lets up on his teasing of the world of art — E.T.A. Hoffmann was a poet, Offenbach’s Hoffmann is a poet and singer, Stella is a singer, etc. Pelly and his brilliant scenographer Chantal Thomas have created a production that is continuous creation, and like the roles of Hoffmann and Stella in all her transfigurations — roles that demand great virtuosity and superhuman strength — their production teases the art of stagecraft by teetering it on the edge of what mechanical stagecraft can possibly achieve.

The efforts of mind and muscle expended to operate its scenic mechanism are enormous, and amazingly and precisely timed to messieurs Offenbach and Hoffmann. But in a real dream all this movement would seem effortless, even magical. It did not quite work that way just now in Lyon — there were occasional thumps, pounding now and again, walls chasing singers, platforms that jerked their way across the stage. The production simply does not sit comfortably within the confines of architect Jean Nouvel’s theater.

But you can imagine that when this production does move effortlessly it easily becomes the star of the show. The production was reborn last year in Barcelona and San Francisco before returning now to Lyon. In San Francisco it achieved, more or less, the smoothness of a dream (though there were still technical glitches) and it was in fact the star of the show. However the star was supposed to be Natalie Dessay who finally sang only Antonia (appropriately and ironically the iconic French diva announced her retirement from the opera stage after the second performance).

Of course the name of the opera is Hoffmann thus the star of the show should be Hoffmann. In fact in Lyon American tenor John Osborn achieves the artistic stature to fulfill the demands of Laurent Pelly’s concept, and hold the stage vocally and histrionically through this monumental competition. Mr. Osborn is a very physical performer, a real actor and a beautifully voiced, finished singer. Vocally he is a tenore leggero allowing him to negotiate the role’s high tessitura with ease, maybe even interpolate a few high notes for added effect. At the end however when we expect the pathos of an emotionally and vocally exhausted Hoffmann Mr. Osborn sounded like he could take it from the top all over again.

The Pelly production begins with Stella alone onstage singing Mozart’s “Non mi dir” from Don Giovanni. It was Italian diva Patrizia Ciofi, an esteemed artist who quite resembles Natalie Dessay, in what seems to be her role debut as Stella. It was easy to forgive this bit of wobbly Mozart, harder to forgive the wooden tones of Olimpia with truncated high notes, painful to hear the hoarse sounds of her lower voice as Antonia, and irritating to perceive her struggling tiredness as Giulietta. Though dramaturgically Offenbach’s Tales may beg a single opera star to fulfill an impossible array of voices, this example vindicates casting three different singers who can compete vocally with Hoffmann himself, not to mention a conceptually demanding production. 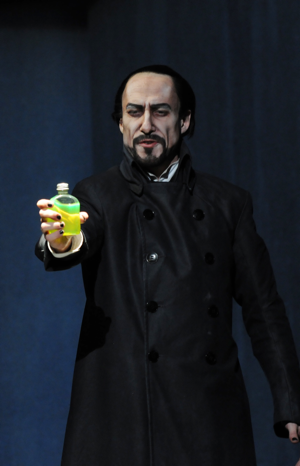 French bass-baritone Laurent Alvaro made big voiced, sinister villains, moving through the roles with force and aplomb though he does not exude a vocal, musical or histrionic refinement that rises to the sophistication of the Pelly production. The same may be said of young Cyrille Dubois as the four servants. Belgian mezzo-soprano AngÈlique Noldus was over-parted as Nicklausse, neither her voice nor her persona able to cross over the pit into the auditorium. The roles of Luther and Crespel were clumsily executed by British baritone Peter Sidhom.

Offenbach’s score is one of opera’s most engaging masterpieces. But even the pit could not save this performance. This sixth performance (of eight) was conducted by Philippe Forget (Kazushi Ono conducted the first four). This young French maestro conducts minor projects at the OpÈra de Lyon and elsewhere. While the Lyon orchestra ably fulfilled its role and the maestro and singers were comfortable with one another, the wit, power and pathos of the score were sorely lacking. Perhaps the young maestro was unnerved by the roughness of the production and its singers.