There was some foreign intervention, the Otello of American (Wisconsin) tenor Gregory Kunde and the Iago of Spanish baritone Carlos ¿lvarez. The American is one of Europe’s leading bel canto tenors who sang Rossini’s Otello long before taking on Verdi’s Moor, in fact his role debut as the Verdi Otello was in the premiere of this production that happened in Valencia, Spain in June 2013 with these same three principals (Zubin Mehta conducting).
Kunde is a bel canto singer who finds unexpected lyricism in this gigantic showpiece usually undertaken by the spinto voices. Kunde’s voice resonated with more depth and beauty than his Rossini roles elicit, with a substantial force of voice somewhat rounder rather than the cutting tone that serves him well in Rossini. The result of this lighter voice in Genoa was a vulnerable Otello, a man neurotically tormented by jealousy, not simply possessed by it. This lyricism grounded the Livermore production as an exposition of neurosis, Desdemona and Iago components of Otello’s neurosis.
¿lvarez possesses a darkly colored voice, a black tonality often found in basses who must create the dread associated with opera’s villains — though a baritone Iago is maybe the ugliest of all operatic villains. ¿lvarez’ lack of tonal warmth plus his reserve of power, that of a true Verdi baritone, his slim stature and his head endowed with snaky black locks of hair made an evil character who oscillated between feigned passivity and triumphant domination. True to the end he did not dash toward a cowardly escape but ceremoniously descended off the upper edge of the stage, no longer a player in Otello’s hell. 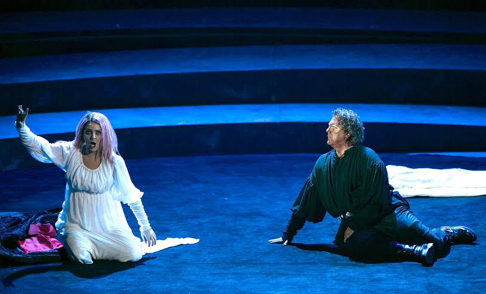 Maria Agresta as Desdemona, Gregory Kunde as Otello. Photo by Marcello Orselli
Soprano Maria Agresto as Desdemona revealed levels of vulnerability to human instinct that Shakespeare ignores (the Bard hides deeper character revelations in the phrase picked up by Verdi and Boito — “born under an evil star”). This splendid young soprano is of powerful and complex voice, fearlessly mounting to pianissimo high notes that permitted hints of risk which added edge to character. Of complex persona as well she circled Otello in the Act I duet almost dancing as an animal in rut. And there was more circling — flirtatious at the least — in her Act II meeting with Cassio. La Agresto sang her final prayer lying face down on the floor, a fallen angel, reflected as the whore Otello had made her.
This spectacular casting was topped off by the Cassio of Angelo Fiori, a very tall, very present, young Italian who moved a bit like a dancer. Like Desdemona he was wigged in long blond hair unabashedly establishing a physical connection to her that ignited Otello’s neurosis and palpably inflamed the innate terror of the corni (horns) of all males (Italians) present in the theater.
Like melodramma and like verismo, these characters were possessed by big emotions, clearly stated at the beginning and simply awaiting brutal dÈnouement. This was Act III, the Venetian scene, when 26 year-old conductor Andrea Battistoni let loose with volumes that equaled, maybe exceeded the opening storm, volumes that were spine chilling in intensity, and dramatically ironic in that they established the enormity of the murderous emotion yet to come. This young conductor obviously relished the brutality of the Livermore conception, visibly participating with the stage by demonstratively pushing the chorus to and beyond its limits. All chorus scenes were huge, the Act II garden chorus seated, aggressively taunting more than praising the purity of Desdemona. 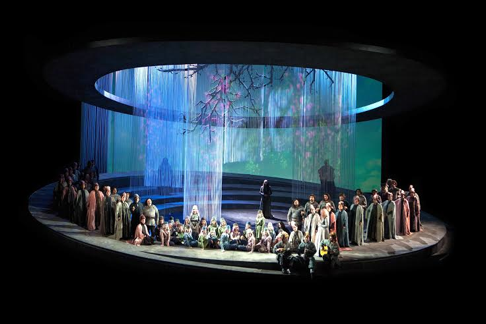 Act II Garden Chorus. Photo by Marcello Orselli
These days metteur en scËne Davide Livermore is the most visible stage director on Italy’s more adventurous stages. Like all of his recent projects here he was not only stage director but also the set designer with the collaboration of GiÚ Forma, a Milanese design company that does big events like the America’s Cup 2012 and the MTV Awards. Here the concept was a vortex like structure (descending concentric circles) with a central, focal disk, like the pupil of an eye. The pupil moved, rising above the structure to transport Otello and Desdemona to the heavens of desire in their love duet. It elevated its front edge from which Iago delivered his “Credo in un dio crudele” at which point the edges of the concentric circles illuminated in red lines (Mr. Livermore is credited for the lighting).
Costume design is credited to Mr. Livermore, wigs a signature element of character (the long blond wigs of Desdemona and Cassio, the long black tresses of Iago that may or may not have been a wig, the identical ship-like, punk shapes of the wigs for the women’s chorus). The swaths of cape colors illuminated character — Iago in luminous metallic silver, Otello ultimately in priestly vestment, a red-lined white cape, that he carefully took off to administer death to Desdemona. Stage movement was abstract, actors moving on the vortex lines of an unstoppable downward vacuum, finding the most powerful, emotional place on the structure to deliver their signature statements. Otello at the end again elevated on the pupil of the eye, this time alone reliving the “bacio” to Verdi’s trombones whispering the opera’s opening storm.
Rarely do operatic forces converge with the artistic power created on the Carlo Felice stage by this production.
Michael Milenski