There was the usual automotive hardware in front of Monte-Carlo’s magical opera house. The peasants were all on the stage of the Salle Garnier, an embarrassment of riches, most notably Nicola Alaimo as Guillaume Tell and Celso Abelo as the lovesick Arnoldo. In fact the entire cast beginning with Mekeldi Atxalandabso as Reudi whose hymn to Swizerland “Accour dans ma nacelle” that opens the opera upheld the high level of singing that defined the evening, Basque tenor Atxalandabaso’s warm and easy high “c”’s only the first of the many vocal pleasures of the evening.
Music director of the Orchestre Philharmonique de Monte-Carlo Gianluca Gelmetti presided over his orchestra for this occasion, an opera he conducted twenty-years ago (1995) at the Rossini Opera Festival in Pesaro to enormous critical acclaim. Much has transpired in his career since 1995. He is now famous for the Italian post-Romantic repertory perhaps explaining the massive sonic scope he found in the Rossini score for the Salle Garnier, and the warmth of tone he infused into the orchestral sound firmly persuading us that Guillaume Tell was a new, sentimental Rossini, and a unique Rossini — it is the last of the Rossini operatic oeuvres.
Before all else Rossini’s Guillaume Tell is French grand opÈra as its extended dramatic recitatives attest, though Rossini could not keep himself from breaking into some coloratura from time to time, a lapse effortlessly and beautifully absorbed into the musical flow by the maestro. Rossini discovered the pleasures of the rich French low mezzo-soprano voice in Hedwedge, the wife of Guillaume, dissolving this voice into a sublime trio with Guillaume’s soprano son, Jemmy and Mathilde, his savior, with its intricacies rendered by the maestro in rich delicacy. Though Gelmetti had already pummeled us with the fiery Rossini we know so well when Guillaume and Walter Furst shamed Arnold into fighting for his fatherland. 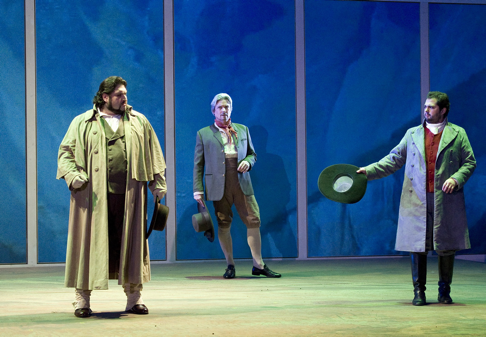 Nicola Alaimo as Guillaume Tell, Nicholas Cavallier as Walter Furst, Celso Abelo as Arnold.
There was the spectacle of typical grand opÈra, the maestro endowing the classic Rossini storm with truly terrifying proportions (even though it was the same storm we know from the Roman comedies). And there were the magnificent complexities of the Rossini ensembles we know from the later Naples tragedies, the defiance of the peasants to the strength of the Hapsburgs magnified by Gelmetti in the repeating brass motifs in the orchestra, each time louder until it could not become louder. But it did, shattering the acoustic of the Salle Garnier.
At last Rossini resolved the opera’s conflicts into a huge, uncharacteristically pastoral ensemble evoking the beautiful cello elegy of the overture with its singing oboe echoed by flute — the majestic serenity of the Alps’ mountain valleys restored. But only for a short while, the peasants finally rushed forward shouting “libertÈ, libertÈ!” as loud as they possibly could.
One could not help recalling that it was in 1910 when the Monegasque Revolution forced the prince of Monaco, until then an absolute ruler, to proclaim a constitution.
What we missed in Monaco were the ballets, an economy that saved us one and one half hours of time, compacting the above musical riches of the opera into a brief three hours twenty minutes. Other less obvious economies took their toll as well, rendering the storytelling sometimes oblique and other times incomprehensible. The adage that the full ballets are integral to the dramatic integrity of Guillaume Tell was again proven in Monaco. 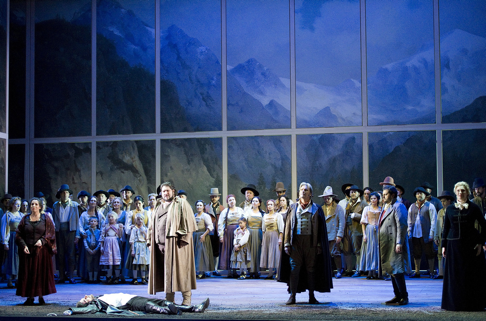 DÈcors by Eric Chevalier, Costumes by FranÁoise Raybaud
Monaco-born Jean-Louis Grinda, the metteur en scËne (and general director of OpÈra Monte-Carlo) knows that the complex musico-dramatic structures of the Rossini tragedies resonate in abstract formulae, either conceptual (like the museum dioramas of the 2013 Pesaro production) or in the physical architecture of the set itself. In this new production Grinda’s designer, Eric Chevalier, evokes the Helvetic mountainous setting in hazy images projected onto an imprisoning box structure of small repeating panels that open and close, the back wall of which disappeared into the brilliant dawn-of-freedom light. Costumer FranÁoise Raybaud provided threatening teutonic patterns of the late nineteenth century for the Hapsburg characters.
Movement for the chorus action was in purely geometric terms — lines and circles. Images were few, simple and powerful. Guillaume Tell himself pulled a plow, like a beast, across the stage during the opening chorus (a shocking and confusing image), there were two dance pantomime sequences in which a ballerina and a ballerino were attached to one another in a kiss (like two animals stuck together in the mating act — another shocking and confusing image) — choreography by EugÈnie Andrin. Arias and duets were delivered standing front and center, as in concert format. Grinda provided a basic context and basic movements for the opera, but did little to illuminate the story evidently relying on the genius of Rossini and the brilliance of the performances to fire the evening.
And that they did.
Italian baritone Nicola Alaimo is a gigantic figure, appropriate to a mythic hero of William Tell proportion. His voice and presence are warm, powerful and encompassing, in short he is a convincing Guillaume Tell. His antagonist Gessler, the Hapsburg governor, was sung by French bass Nicholas Courjal in threatening, black toned vocal color, with a vividly present figure. Spanish tenor Celso Abelo as the fickle tenor Arnold had high “c”’s to spare, squarely hit and held rather then finding place in the musical flow. Just when you thought no human could have the stamina to hit another, he hit the final one of his showpiece aria and held it forever. Mr. Abelo is an accomplished Rossini performer. 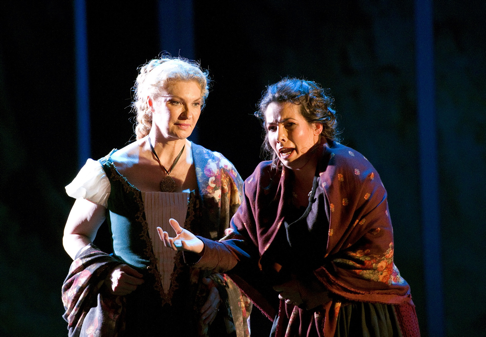 Annick Massis as Mathilde, …lodie MÈchain as Hedwidge
French soprano Annick Massis was Mathilde, a role that only sometimes requires the Isabella Colbran dramatic coloratura model of Rossini tragedies. Mlle. Massis indeed well held the stage as Hapsburg aristocracy, riding crop in hand, though her showpiece arias were powerful her coloratura was not convincing and her high notes were of a spread tone that defied identifying any one individual note. French contralto Elodie MÈchain sang Guillaume Tell’s wife Hedwidge to absolute perfection, and Russian soprano Julia Novakova as his son Jemmy provided the appropriate upper edge to the ensemble textures.
The only disappointment of the evening was the staging (lack of) for the arrow and apple.
Michael Milenski