This stellar evening was about this near legendary conductor and one of the world’s great orchestras. It was sophisticated music making that inhabited these first moments of the Wagnerian maturity. This musical illumination brought clarity, directness and purpose to Wagner’s obsession with art as the elixir of love and love as the elixir of art. Though more than anything else this performance whetted the appetite for the great Wagner — the musical sublimities of Meistersinger, the philosophic sublimities of Tristan.
The orchestral magnificence betrayed a musical carefulness that deprived the evening of a dramatic thrust that might have given real focus and meaning to the two deaths that brought the saga to an end and might have given deeper and more complex meaning to the opera. As it was Maestro Levine’s ending simply did not provide the momentous send off we would have wished for the tortured souls of Elisabeth and Tannhauser. 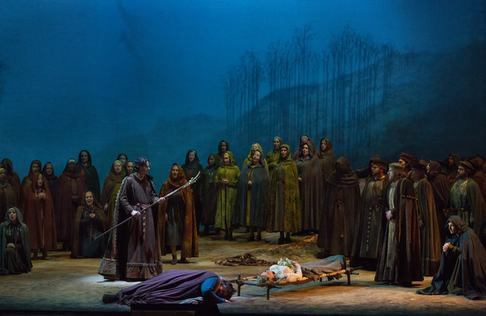 The deaths of Tannhauser and Elisabeth overseen by Wolfram (Peter Mattei)
Since it was conceived as a purely musical event the Met offered its 1977 production by German director Otto Schenk. This director remained a conservative force in those years of dramaturgical ferment, thus he made no attempt to interpret the story, nor any attempt to lay bare the intricacies of the opera’s meanings. His designer G¸nther Schneider-Siemssen painted drops that evoked the shapes and colors that must have pleased nineteenth century sensibilities as they did please the sensibilities of New Yorkers of the 1970’s (San Franciscans had moved on in those years).
For the Paris premiere of Tannhauser Wagner extended his original overture to transform itself into a magical realm of eroticism danced at the Met by eight strong† ballerinos and eight fine ballerinas to the presumably original choreography of Norbert Vesak, well known as well to San Francisco Opera audiences of this epoch (see lead photo). Mr. Vesak typically provided big movement for big opera, and here offered as well absolutely breathtaking lifts (and lots and lots of them) to fill the Met’s gigantic stage.
The Met’s Venus was California mezzo soprano Michelle DeYoung, an early graduate of its Lindemann Young Artists program. Ms. DeYoung is of ample voice, and that seemed to be the criteria for the casting. This spectacular role profits from powerful artistic personality, a trait that Mme. DeYoung did not project. 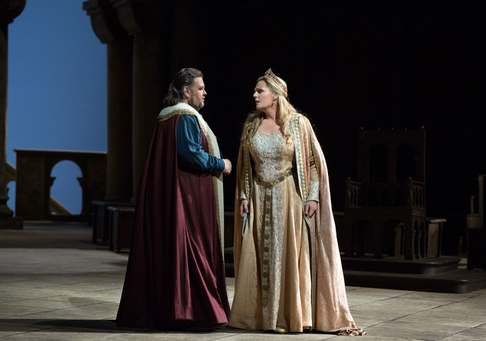 Johan Botha as Tannhauser, Eva-Maria Westbrock as Elisabeth
Elizabeth was sung by veteran soprano Eva-Maria Westbrock. Though no longer at vocal prime her mastery of the role and its stylistic demands was evident and satisfying. This alone certainly fulfilled Maestro Levine’s expectations notwithstanding her very wide tone — though she did manage it admirably.
Tannhauser himself was sung by South African tenor Johan Botha. He is in fine voice and a musically clean singer. Within the scope of the Met forces his voice may seem small, however it blossomed from time to time into richer sounds that sometimes shone in his emotional third act account of his trip to Rome.
The disappointment of the evening was the Wolfram sung by Swedish baritone Peter Mattei. This fine Mozart baritone seemed vocally over-parted, failing to sustain full tone over the longer Wagnerian phrases and in fact to fulfill the dramatic weight of this crucial role. His second act song to love was vocally unconvincing, and I feared he was going to lose his voice in his third act Song to the Evening Star. Evidently a Met favorite the audience did not seem to mind, awarding him the largest ovation given any of the singers.
Elisabeth’s father Hermann was ably performed by Austrian bass G¸nther Grˆissbock. The remaining supporting male roles did not satisfy. Of particular note however were the beautifully pure tones of the page, soprano Ying Fang.†
The performance belonged to the conductor, James Levine and the Met orchestra and it was indeed magnificent.
Michael Milenski

Michael Milenski is a San Francisco based opera critic.
Cast and production information: