The Tuesday night audience was once the grand old, rich San Francisco, and maybe it still is. But this past Tuesday (December 1) the railroad magnates and oil executives seemed to have disappeared into a crowd of much younger dot-commers (there is a quite a dot-com explosion in San Francisco in case you hadn’t heard).
Some, maybe many of us were not so excited given that it was a mere two years ago that we were given this same production created by Spanish stage director Emilio Sagi. There were then some fine artists on the stage, and the pit was more than adequate. It was a good show, the best Barber I had ever seen.
Il barbiere is in fact a very difficult opera to pull off, and the 2013 Sagi production almost did.
Luckily for those dot-commers who somehow found themselves in the opera house, and for the die-hard opera audience this revival was an even better show, coming ever closer to really making the grand old comedy everything it can be — an elusive ideal to be sure. 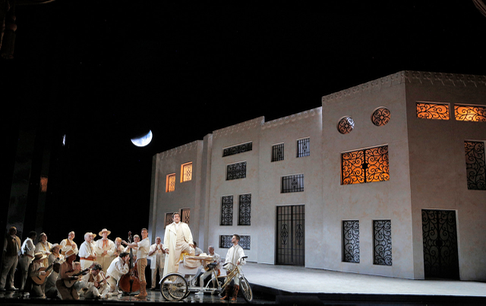 RenÈ Barbera as Almaviva
The star of the show is the set! Nothing more than a platform and a wall. These elements are basic comedy — the Roman street and the commedia dell’arte platform. This simplicity motivates the need for action and this makes comedy all about performance. It is a public place with a stage so let’s do a show!
This Barber was indeed about the comedians, each with his own abstracted comic personality, each with an individual swagger (Rosina’s outdid them all), each with their own silly schtick. They stepped on and off the platform reminding us that the opera is after all later-day commedia dell’arte, they played directly to the audience to get laughs and this meant much of the evening they were down stage center where all performers prefer to be.
The charm of each comedian was free to seduce the audience, and that they all did, silliness magnified by something as simple as body height. Almaviva and Don Bartolo are petite, Basilio towered over them, Rosina was slightly taller than Almaviva. All those provoked funny compromises in our perceptions of these archetypal comic characters.
Some of them could really sing! Texas tenor RenÈ Barbera had the most to sing, and sing he did, sailing easily into tenorino sphere when needed, cleanly executing coloratura (those exciting moments when there is so much excitement that musical line breaks into delirium). All this without losing a finely honed even sound. Exactly the same may be said of Argentine mezzo-soprano Daniela Mack, a former Adler Fellow, whose strong, lovely mezzo voice, beautiful high notes and solid diva confidence brought egotistical perfection to this Rosina. 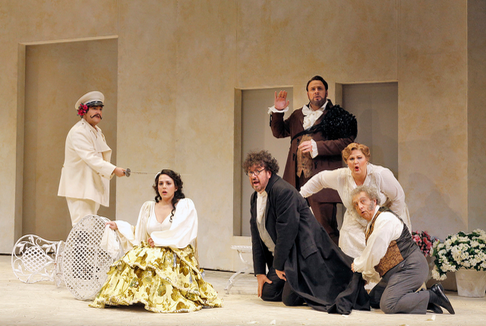 RenÈ Barbera as Almaviva, Daniela Mack as Rosina, Andrea Silvestrelli as Bartolo, Lucas Meachem as Figaro, Catherine Cooke as Berta, Alessandro Corbelli as Bartolo
Italian baritone Alessandro Corbelli, Don Bartolo, is a bel canto specialist. Though his voice is not large he used it with easy freedom as complement to genuine buffo acting. His rather soft, fast patter made me yearn for louder, even faster patter. Mezzo-soprano Catherine Cooke is one of San Francisco’s treasures, her Berta startlingly present and very well sung.
American baritone Lucas Meachem played Figaro with a certain charm, though I found his singing sloppy and his tone production irritatingly inconsistent. This may have been his idea of making Figaro an amusing character. Italian bass Andrea Silvestrelli is a fine comic performer who is vocally unsuited for Rossini roles. He is San Francisco Opera’s catch-all bass, one night the Night Watchman in Meistersinger, the next night Basilio, etc.
All this wonderful singing, and much of it high Rossini art, occurred because of the pit. Conductor Giuseppe Finzi somehow finding the real Rossini simply unleashed the joy of singing on the stage. From the overture to the finale this fine Rossini maestro never dropped the constant percolation and the easy boil of the Rossini musical continuum. We joyfully felt, obviously with him, the wonder of opera on the stage, and this does not happen very often.
The stage director of this revival of the Sagi production was Roy Rallo. The staging seemed greatly streamlined from the 2013 Sagi directed performances, the individual performances more vivid, the chorus and ballet more abstracted, and the bicycles and other post modern touches were less obtrusive. It was very effective comic staging (see above).
Michael Milenski