The first production (1835) of La Juive at the Paris Opera demanded 20 horses on stage (in Lyon there was not even one!). In 1835 Paris la juive and ElÈazar, her father threw themselves into a cauldron of water boiling upon a huge fire (in Lyon there was no leap, no cauldron or flame, the victims merely strode up stage into vague wisps of theatrical fog).
Not that the OpÈra de Lyon was economizing as the sets were huge and complicated. Huge scenic elements moved continuously on and off a cross-stage moving belt, upstage there was another belt moving a forest of huge burned tree carcasses back and forth almost constantly. All of this was elevated 8 feet (2 1/2 meters) above the stage floor. An enormous bank of steps crossing the entire down stage descended to the stage floor (there was a net covering the orchestra pit to catch anyone who might trip and tumble). Not to mention the huge flat that hung flat way up above the stage, lighted spectacularly from time to time (surely a lighting designer’s nightmare). 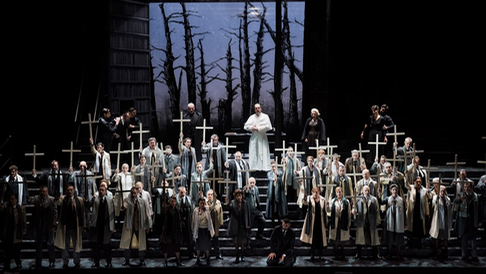 Roberto Scandiuzzi as Cardinal Brogni (production design by Pierre-AndrÈ Weitz)
And surely a conductor’s nightmare in his attempts to coordinate the pit with the stage where in addition to the initial 8’ elevation much singing occurred on the additional three levels of a tower from which la juive and her father did not fling themselves into the cauldron [our assumption when we saw the tower in the first act was that it surely would serve such purpose].
The pit however was where the strengths of the production emanated. 33 year-old conductor Daniele Rustioni (music director designate of the OpÈra de Lyon) ran a tight ship, feeling and communicating every quiver of musical emotion and energy from the soles of his feet to tips of his fingers (he conducted without stick). [I sat above the pit for the first act and had full view of this amazing young conductor.]
Metteur en scËne Olivier Py and his designer Pierre-AndrÈ Weitz envisioned HalÈvy’s opera in tones of black, the color of traditional European Jewish clothing, allowing only Cardinal Brogni and the catholic congregation to be clothed in light or white tones of generic modern dress. La juive’s nemesis, the Princess Eudoxie was in a lacy black gown allowing flesh to be seen (a lot of it from time to time), and she was wigged like a gangster moll. In her seduction of Leopold she slithered into brilliant red stockings [fueling our expectation that there would be red flames for la juive’s immolation though of course finally there were no flames].
The plot: Leopold returns victorious from a war to be received as a hero by the Christian people and Princess Eudoxie. He is however in love with la juive so he must pretend to be a Jew. When this pretense is discovered he flees to the palace into the arms of the princess. The Christians hear the news and condemn Leopold, la juive and her father to death. La juive and Princess Eudoxie agree that la juive will exonerate Leopold, sacrificing herself to the [absent] flames. When it is too late la juive’s father ElÈazar tells the Cardinal Brogni that the juive is in fact the cardinal’s long lost daughter. 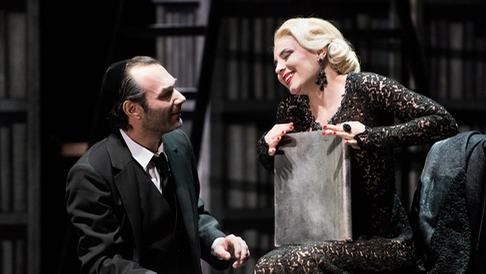 Nikolai Schukoff as ElÈazar, Sabina PuÈrtolas as Princess Eudoxie
Evidently all this is not really about religious tolerance. It is about making a story with emotive moments without inciting public judgement about Christians immolating Jews or Jews murdering anyone who profanes their rites. It is about love, forgiveness and sacrifice. French grand opera is purely about opportunities to sing and there were lots of them — declarations of love, denunciations of love, of vengeance, of pity, of anger, trios and sextets of frustration, incomprehension or comprehension. And huge choruses of support for all the above.
The cast for this grand opera event in Lyon generally lacked the power of voice, the color of voice and the stamina of voice to guide us safely through the musical intricacies of HalÈvy’s lengthy, singerly score (vocally it lies between Rossini and early Wagner). Agility for coloratura is a prime requirement, but equally important there must also be stamina for carving out longer phrases. Plus as characters have specific motivations voices must be those that add appropriate color to words and actions. Not that there was not a lot of fine singing. It was simply that most of the singing did not create big enough effect.
French grand opera composers structured the arias and ensembles to impress audiences who would then respond with applause. Few of the arias or ensemble in Lyon got applause, and when there was applause it was tepid. The hugest scene, the finale of Act III with all principles and the chorus of Christians on stage, had little effect because the too small voices of the principals could not soar over the chorus — blame also the place on the stage where the chorus was seated. It was a perfect megaphone, amplifying the chorus voices to the point that they shattered (sound waves colliding), ruining this magnificent scene.
Still it was a French grand opera and it is not often that these lengthy, difficult operas are staged in any manner. N.B There was no ballet, an integral component of French grand opera, though I am not sure where it should have occurred.
La Juive is the centerpiece of the OpÈra de Lyon’s mid-winter festival, this year Festival pour l’HumanitÈ, with the theme of tolerance. Metteur en scËne Olivier Py could not help editorializing — in the Act I finale the Christian chorus places itself down stage center with placards urging “France for the French,” “Out with the Jews” [read Muslims], and in the silence prior to Act V (the death by fire) hundreds of shoes [the death-oven image] fell from the rafters. In coincidence both La Juive and Benjamin, DerniËre Nuit used the library image to establish the presence of humanity in this Festival pour l’HumanitÈ.
Michael Milenski