The libretto was created by RÈgis Dubray (b. 1940), professor of philosophy at the University of Lyon, the music was created by Michel Tabachnik (b. 1942), conductor of the Brussels Philharmonic and champion of the music of Xenakis and Ligeti.
Both men possess extensive catalogues of original literary and musical compositions. Both men possess biographies placing themselves at the epicenters of our previous century’s social, intellectual and artistic avant-garde.
Add to this primordial soup British stage director John Fulljames and British set designer Michael Levine (and you have the usual addition of Anglo-Saxon critical know-how to make sense of esoteric continental thought).
You get the idea — it wasn’t an easy evening. 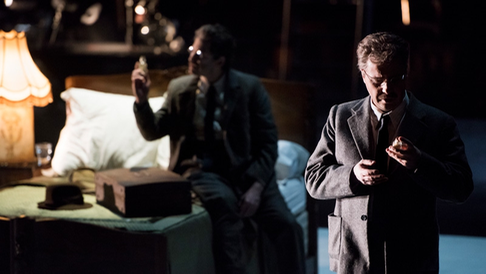 Actor Walter Benjamin and singer Walter Benjamin with bottle(s) of morphine tablets
However its ninety minute duration flew by in what seemed like ten minutes even though it was in ponderous, docudrama episodic form. There were 14 brief scenes documenting Walter Benjamin’s arrival and sojourn of one long evening at a Spanish hotel just across the French border. He was on his way to Lisbon where he would have embarked to the United States. Instead he committed suicide at this hotel.
The opera is his progression from life to death. The libretto imagines Benjamin’s suicide vigil encounters (imagined) with a few of the intellectual luminaries who had supported him in his escape and exile from Nazi Germany, namely Arthur Koestler (anti-Fascist author of Darkness at Noon), Gershom Sholem (German born Israeli mystical philosopher), AndrÈ Gide, Bertolt Brecht, Max Horkheimer (interwar director of Frankfurt School of Critical Thinking, this institute later in exile at Columbia University together with Horkheimer), Asja Lacis (Benjamin’s mistress — a Latvian actress, avid communist, friend of Brecht) and Hanna Arendt (refugee German Jew, naturalized American political scientist). 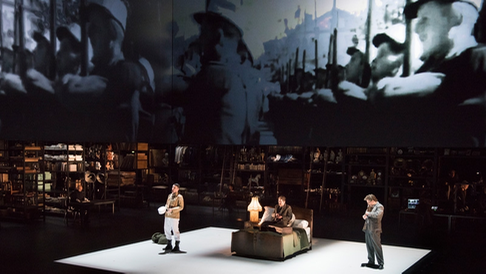 The library/museum of human artifacts (below), video of Third Reich marching soldiers (above)
Yes, it was a lot to think about, the libretto projected high above the stage. The upper part of the stage itself was a huge three-sided box onto which were projections of Nazi and Stalin era propaganda films. The lower stage a huge three sided room of library shelves — books, artifacts, the above characters stuffed onto these shelves except when they came alive in Benjamin’s imaginings. Plus there were two Walter Benjamins, one a singer and the other an actor, sometimes one, sometimes the other, sometimes both being Benjamin. Not to mention eight ninjas (clothed in black) who were sometimes French Foreign Legionnaires and sometimes archivists of the above library. Plus there was a myriad of supporting roles divided among actors and singers.
Conceptual and visual cacophony, from beginning to end.
And, well, the music itself. There was a lot of it and a lot of it was musique concrete [a montage of any possible recorded sound] when it was not usually unidentifiable masses of orchestral sounds — triple or quadruple winds, full complement of strings, piano and harp, legions of percussion instruments, accordion, etc. No doubt is was more organized and structured than this quick appreciation of its general cacophony.
The genius of the production was however the seamless integration of the pit and the stage into a indecipherable, inexplicable, undefinable frenetic whole the magic of which created quite a wallop.
The OpÈra de Lyon went for broke. We, the audience, roared our appreciation and roared some more, though I’m not sure how many of us would opt to see it a second time.
By the way, Benjamin, DerniËre Nuit was one of three operas that comprise the OpÈra de Lyon’s midwinter festival, this year entitled Festival pour l’HumanitÈ with its theme of tolerance. This production rose well above such a prosaic formula, and succeeded in making art — an accomplishment not always achieved in opera houses these days.
Michael Milenski