The comedy’s huge success in Milan won a military draft exemption for the 20 year-old Rossini, and thus assured the world of its most impressive catalog of operas.
La pietra del paragone is a bit like Cenerentola — which of the rich count’s pursuers should he marry? There are two who care about his money and position, and one who cares about him. It’s a thin story, more of a simple farce than than the richly human comedies yet to come.
Count Asdrubale devises a test (the “stone of comparison”) — he pretends to be ruined, and thereby will find his true friends. And so the antics continue, musical and physical, for another couple of hours.
From the beginning Pier Luigi Pizzi never lets up, discovering new ways to animate the cubby holes of his set, including a swimming pool on the patio of his two story Malibu spread (it is very California). The scene-stealing count is into physical culture, and plays it to the hilt, illustrating the role’s narcissism with absolutely splendid fioratura. 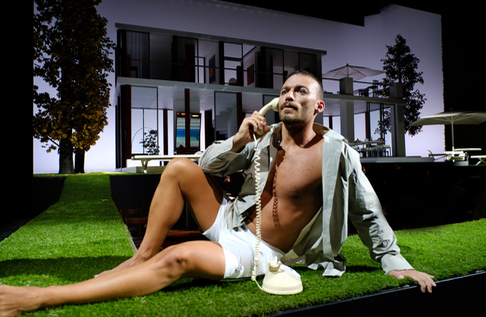 Gianluca Margheri as Conte Asdrubale
Each of the gold diggers has a champion, one a pretentious poet, the other a pretentious journalist. And the count’s true love has a champion as well — a real poet and a true friend who loves the heroine, but is left standing there.
Duets are sung as tennis matches (lobbing the ball back and forth across the pit), lovers’ duets are sung by telephone across the stage, machinations are devised on the diving board, false starts end up in the pool (you can be sure this very real pool was heated). A hunting party ends up in a duel, the heroine concocts a trick of her own to seal the deal with the count.
And the antics never stopped. It was slapstick humor and physical humor that somehow never became tiresome (well, there were those who nodded off in our row) and that sometimes motivated involuntary guffaws. This Pizzi production has indeed become a classic.
Not to be outdone Rossini proved himself unstoppable in musical antics, from patter arias, to patter duets and trios, not to forget a quintet with tons of patter. Vocal ornamentation flew around the stage and into the house via the much-used walkway fronting the pit. And the young composer from Pesaro gave his true lovers spectacular arias to cap the show — and that brought huge applause from the excited house (those who were still awake).
Milanese wunderkind maestro Daniele Rustioni, now the principle conductor of the OpÈra de Lyon, recognized the high-tailed nature of the young Rossini. With the Orchestra Sinfonica Nazionale of the RAI the maestro balanced the fever pitch of the musical and stage antics with workable tempos and measured energy, even finding elusive hints of the great Rossini from time to time.
The three amazing buffos were Florentine bass baritone Gianluca Margheri as the super cool count, Benevento (near Naples) baritone David Luciano as the slimy journalist and Melzo-born (near Milan) bass baritone Paola Bordogna, a Pesaro mainstay, as the truly terrible poet. All three are splendid singers as well as real performers who epitomize a new generation, or re-birth of buffo.
Needless to say the tenor left out in the cold, Cavalier Giocondo, was not an Italian, but a Russian, Maxim Mironov who earned the evening’s biggest ovation for his spectacular aria “Quell’alme pupille.” 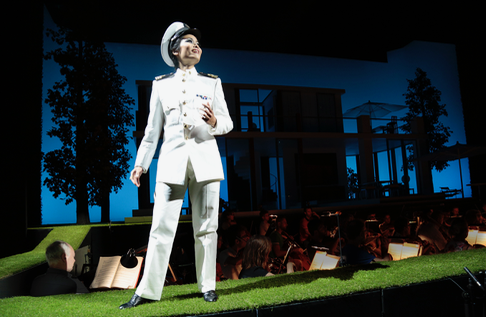