It’s the famed librettist Arrigo Boito’s only opera, premiered in 1868 when he was 26 years-old, filled with youthful musical idealism and the then avant-garde ideas flowing down from the north. Though what we have seen just now in Orange’s huge old Roman theater is his 1876 version, much reduced in length. Faust is now a tenor (a flashier voice) and there is the added Act III grand duet “Lontano, lontano” – the too good to pass up opportunity to sentimentally dwell on what Faust and Marguerite’s lives might have been.
Said to have been composed in response to Gounod’s superficial treatment of the famed legend Boito’s opera has nonetheless become a vehicle for the world’s liveliest metteurs en scËne to show supercilious wit. To be recalled are a couple of late 1980’s productions — the Genoa production by American director Ken Russell where the religious fervour of nuns becomes the fuel for a spaceship headed to the Walpurgis Night, and the Geneva production by Canadian director Robert Carson with its bared female breasts and exposed male genitalia. More recent was the Jean-Louis Grimpa production in Montpellier where Mefistofele exulted in Grecian beauty from afar, perched among audience on a balcony railing, legs dangling into the void.
Jean-Louis Grimpa, now in charge of the ChorÈgies d’Orange (as well as Monaco’s OpÈra de Monte-Carlo) based his production for Orange’s ThÈ‚tre Antique on his Montpellier production, the difference becoming that of scale, the farcical indulgences of Montpellier were sacrificed to the monumentality of Roman architecture. The directorial wit was now expressed in a tongue-in-cheek explosion of staging grandeur. So much spectacle, so little content. And so much fun. 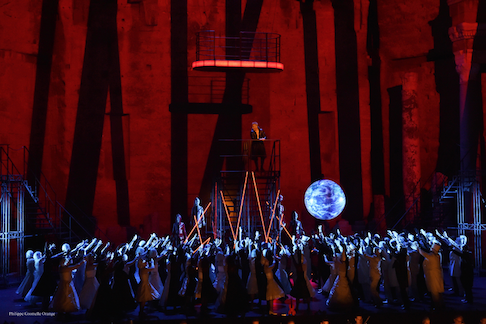 The Walpurgis Nacht, and the faraway earth
The Orange stage is 300 plus feet wide, the height of the back wall is 100 plus feet. The combined choruses of the operas of Monaco, Nice and Avignon swathed in miles of white gossamer-like fabric flowed on, across and off the stage as the heavenly choirs. For the Walpurgis Night this massive chorus wore exaggerated, hugely colorful village fair theater costumes. They cavorted onto and off of the stage and wildly upon and down from several rolling, welded metal staircase ramps (the only constructed scenery) abetted by clowns on very high stilts and more clowns on roller blades.
All this against full back-wall color projections, evoking marvel at the advancement of theatrical projection technology at Orange over the past ten years, from the first black and white moving shadows of a Trovatore way-back-when to the now detailed, almost photographic architectural images. Of spectacular effect was a small platform that hung from the recently added roof now covering the ThÈ‚tre Antique’s stage that slowly descended (the platform) while the image of an acropolis slowly arose. The physical sensation of ascent this trick created was truly amazing!
Opera’s stories are told to the ThÈ‚tre Antique’s 9000 spectators in bold strokes, without subtlety. The staging in Orange is always evident, principles congregate down stage center where they are both singer and scenery, and where they take advantage of the theater’s amazing and excellent acoustic to sing their arias and duets of which Boito’s Mefistofele offers a plentitude.
As is usual Mefistofele is never far from front and center anyway. Here it was Uraguay bass-baritone Erwin Schrott who managed a non-stop plethora of flashy and triumphant poses for three solid hours, including a beyond-the-pale series of catcall whistles as he collapsed on a walkway just by conductor Nathalie Stutzmann for the final notes of the opera. Mr. Schrott was in fine voice indeed, and well deserves to count Mefistofele among his signature roles (Don Giovanni as example of another). 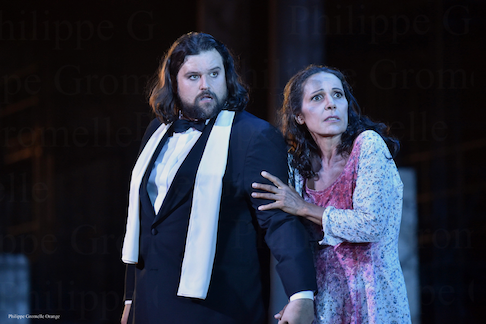 Faust and Margherita
Monaco born tenor Jean-FranÁois Borras was a large scale Faust, boasting sufficient heft and presence of body and voice to persuade even the furthest away spectators of his earnest pursuit of enlightenment and his distress at the plight of poor Margherita. Certainly more at home in the French repertory his Faust missed the Italianate mannerisms that could have made Boito’s naive music into a more convincing vocal display. The same may be said of the Margherita of French mezzo-soprano BÈatric Uria-Monzon who was Orange’s spectacular Carmen in 2008 (among many roles at the ChorÈgies). She delivered the famous “L’altra notte in fondo al mare” in splendid voice though she did not move us with the glorious variation of vocal colors that have made this aria a standard audition piece for Italianate voices.
The Orchestre Philharmonique de Radio France was conducted by Nathalie Stutzmann, a frequent collaborator with Jean-Louis Grimpa at the OpÈra de Monte-Carlo. Amazingly, impeccable pit/stage ensemble at Orange is the norm, and this Mefistofele was no exception. The two harps of the orchestra earnestly pursued their angelic duties, the satanic bass drum player gave a virtuoso performance together with the dramas that unfolded on the timpani. Mme. Stutzmann held it all together ably without resolving the question of whether Boito’s youthful attempt at composing opera is great or even good music.
The world awaits a production of Boito’s 1867 La Scala score. Only then may we know if Boito’s opera is the send-up of Goethe’s tale that so amuses stage directors.