It was a difficult evening at the OpÈra de Marseille, a fine cast in service of a production from the OpÈra Grand Avignon where stage director Nadine Duffaut has staged 14 productions over the years for her husband Raymond Duffaut, Avignon Opera’s guiding light since 1977 when he was appointed general director by his father, the then mayor of Avignon.
Opera in the south of France traditionally has been mired in politics, the complexities of which extend to the complicities of the ProvenÁal opera houses. This 2017 Avignon Faust soon travels from Marseille to Nice for performances in May.
Mme. Duffaut is in fact an able metteur en scËne. Her 2016 OpÈra Grand Avignon production of Katja Kabanova which I saw at the OpÈra de Toulon (45 miles from Avignon) proved her to be a meticulous storyteller, Janacek’s turgid tale of the intricacies of family and business coinciding with Mme. Duffaut’s obsession with detail. The Katja Kabanova unfolded in nothing more than a white box, Janacek’s motivic complexities directly objectified by Mme. Duffaut’s actors.
Such was not the case in this much reviled production as seen just now in Marseille. The simple bel canto like dramatic structure of Gounod’s naive story was amplified into a complex, bizarre nightmare that can only be deciphered by Mme. Duffaut. There were actually two Fausts, the old one and the young one. Siebel was not Gounod’s trouser role, instead he was sung by a crippled tenor. There was historical black and white film footage of Valentin’s war that was most likely the Franco-Algerian war. All this to make Gounod’s Faust real. 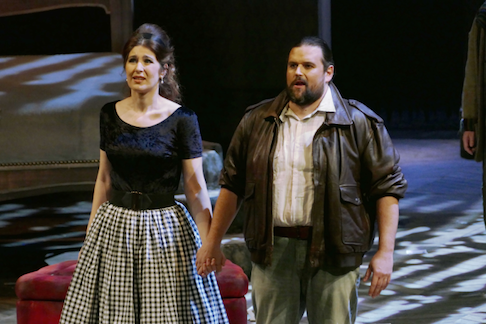 Nicole Car as Marguerite, Jean-FranÁoise Borras as the young Faust
The chorus however was an abstract mass of masked black and white movement, the Kermesse enlivened by three contortionist acrobats. Marguerite was at first a huge image projected on a full stage scrim, who later became real in a costume that shouted early 1960’s only to become a huge doll (20 feet or so), then to give birth realistically a vista, and finally to become a shaft of light for her salvation.
Mme. Duffaut’s long time collaborator, set designer Emmanuelle Favre provided a huge, architecturally detailed box, with a shadow box within the back wall covered by a painting of Jesus wearing a crown of abundant thorns (Bosch?) behind which the old Faust appeared from time to time (when he wasn’t writhing on the stage floor). There were occasional projections of leaves, branches and flowers. All in all it was not a pretty sight — what you could see of it through the bizarre lighting effected by Philippe Grosperrin.
77 year-old American conductor Lawrence Foster therefore took the opportunity to forgo exploiting the sweetness of Gounod’s trivial sentimentality in search of a deeper, desperate musical response to the nightmare Mme. Duffaut had erected on the stage. What resulted was a strident deconstruction of French Romanticism, revealing an emotionless musical skeleton. If nothing else this approach revealed the Gounod score to be technically daunting, engendering new respect for the often discounted genius of this composer.
Red shoed Nicolas Courjal was the MÈphistophÈlËs. This splendid bass reveled in the lighter banter of Gounod’s score, his words tumbling out into the house providing some moments of true delight in this otherwise lugubrious evening. As did vocal meanderings of the beautifully voiced and extremely well sung Faust of tenor Jean-FranÁois Borras, far more at home in French than in Italian as Boito’s Faust (Mefistofele) last summer in Orange. Nicole Car’s Marguerite was a vocal extravaganza indeed, but unlike Faust and the devil she did not find character. …tienne Dupuis as well did not find character in his beautifully sung Valentin, though in his case he was musically trounced by the conducting.
Tenor KÈvin Amiel was the frustrating Siebel, frustrating because I really needed the mezzo vocal color. The old Faust, Jean-Pierre Furlan gave Faust’s “Rien! En vain j’interroge” in vocal shreds. Marthe, sung by Jeanne-Marie LÈvy, sounded mature indeed. Strangely the student Wagner, played by Philippe Ermelier was about 50 years-old.
Bass Nicolas Courjal travels with the production to Nice. Marguerite there will be sung by Nathalie Manfrino of the original Avignon cast. Stefano Secco will be an Italianate Faust. Italian conductor Giuliano Carella (Toulon Opera’s music director) hopefully may provide a starkly different musical atmosphere though the production will remain hopeless.
Nice be warned.
Michael Milenski