Serbian born American theater director Darko Tresnjak envisioned a production with the look of a nickelodean (maybe you put your nickel in and out comes “Mon coeur s’ouvre ‡ ta voix”). Or maybe he was thinking of a slot machine (bet with the odds that the tenor can’t make it to the end). He did like shiny, flowing pale blues and pinks for the intimate scenes within his arched scenic structure, intense reds and metallic blues for the big scenes trusting perhaps that these shapes and colors were enough to tell the story.
?What the Met did do right was hire English conductor Mark Elder to expose the magnificence of the Metropolitan Opera orchestra, and to motivate the glories of the Met chorus whose opening scene reeked with overt Baroque-esque, old testament Romantic musical profundities that gave us enormous pleasure.†
? 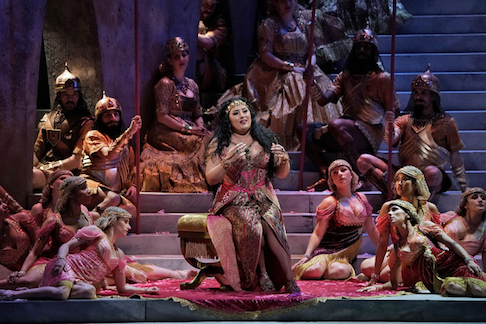 Anita Rachvelishvili as Dalila
The stifling symmetry of Broadway designer Alexander Dodge’s scenic structure placed the singers squarely center stage for their big numbers where the artists of the evening did their best to measure up to the symphonic magnificence rising from the pit. Georgian mezzo soprano Anita Rachvelishvili well held her own in powerful voice though I missed a warmth of sensual phrasing in her two famous second act arias. A well-known Carmen Mme. Rachvelishvili did find plenty of fire in her confrontations with Samson and the High Priest.
Lithuanian tenor Kristian Benedikt, who last fall was called upon to finish the opera when tenor Roberto Alagna gave up after the second act, was the Samson at this performance (his only full performance in this 2018/19 run). Mr. Benedikt did make it all the way to the end, though he encountered some rough patches in the second act. Both his first and third act arias were beautifully rendered, his fine tenor holding strong tone to their conclusions. However in the second act and the final scene of the opera his persona and voice were swallowed into the grander trappings of the staging.
?The High Priest of Dagon was sung in all thirteen performances by bass-baritone Laurent Naouri in easily distinguishable French though his delivery did not rise to the musical elegance of Saint-SaÎns’ score and Mo. Elder’s conducting. Note also that the back-of-seat “super” titles (very hard to see) were offered in German and Spanish. Why not French, as it is, after all, the language of the opera?
? 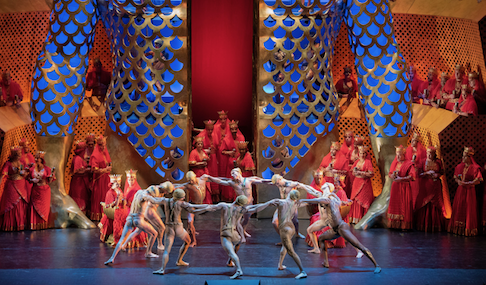 Male dancers of the corps de ballet
Besides the splendid second act arias the famed part of Saint-SaÎns’ masterwork is the third act orgy that culminates in the destruction of the pagan temple. Ten almost naked ballerinos and eight ballerinas executed a complex choreography conceived by Austin McCormick, artistic director of Brooklyn’s Company XIV. The unballetic style was Martha Graham avant gardesque, a look that flowed uneasily with the grander formal structures of the Saint-SaÎns’ score.
?Despite the thunderous percussion climax the short circuit electric flash within Mr. Tresnjak’s nickelodeon did not satisfy as Samson’s crowning moment of superhuman strength. Mr. Tresnjak’s staged oratorio setting of Saint-SaÎns’ score would have profited from some operatic context.
Michael Milenski