Composer Piovani’s La Piet‡ is subtitled a “Stabat Mater” per due voci femminili, voce recitante e orchestra. The work makes use of the 13th century poem/prayer “Stabat Mater Dolorosa,” probably by Jacopone da Todi, known to literary scholars not only as a poet who explored primitive vernacular Italian but also as a visionary of medieval liturgical theater.
Mr. Piovani’s Stabat Mater is theater only in so much as it is made of words and needs the immediacy of live performance to take flight. Mr. Piovani’s Piet‡ is opera only in so much as it uses voice with music (melodramma) and song (arias and duets). Maybe it can be called opera theater because there is are threads of narrative that unfold, and a conclusion is reached — the maternal contemplation of the fact of her child’s death.
The single performance, March 20, did take place in the Teatro Costanzi (Rome’s opera house) thus adding default spectacle. A performance platform sat in front of the covered proscenium (hiding the current Gluck Orfeo ed Euridice installation). Thrusting well into the audience this stage instilled a welcomed urgency into the performance. 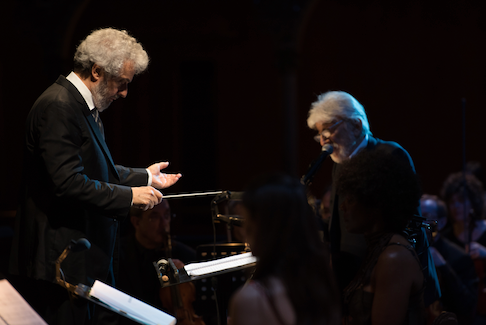 Composer/conductor Nicola Piovani, Actor Giogi Proietti [all photos courtesy of the Teatro dell’Opera di Roma
Mr. Piovani composed this work in 1998 to verses by his friend Vincenzo Cerami (deceased in 2013), the screenwriter for Roberto Benigni’s Life is Beautiful, the film for which both Mr. Pioveni and Mr. Cerami received Oscars. Originally scored for 14 instruments at its premiere that same year the spoken role was taken by Mr. Piovani’s friend, actor Gigi Proietti, then 58 years old.
At the Teatro Costanzi just now 78 year-old Mr. Proietti was again the voce recitante. Mr. Proietti and Mr Piovani are now very well known and very respected figures in Italian film and theater thus Teatro Costanzi was filled to capacity with an enthusiastic and supportive audience.
To say that composer 72 year-old Piovani is prolific is an understatement. He has created the musical scores for 148 films and 49 plays and as well as has created 17 theater works (voices with music) plus a number of interesting chamber and orchestral works. Fortunately Nicola Piovani is a also very good composer.
For this performance of La Piet‡ Mr. Piovani expanded his chamber ensemble to symphonic proportions (the Rome Opera orchestra) — double winds with a full string complement (12/10/8/6/4), harp, two keyboards, expanded percussion plus a saxophone and batterie. The composer conducted. 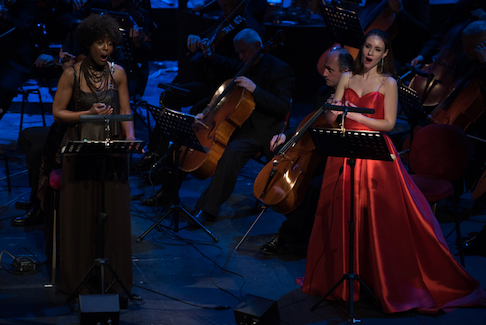 Amii Stewart, soul singer, and Maria Rita Combattelli, soprano
The six movements of La Piet‡ / Stabat Mater interspersed orchestral intermezzi with spoken excerpts from Jacopone da Todi’s prayer (both translated and in medieval Latin), alternating with the histories, spoken and sung, of the lives of two young men. One was from an affluent Europe, the other from third world Africa. The European mother was sung by Maria Rita Combattelli, a high (stratospheric) soprano, amplified only because all voices were amplified, the African mother was sung by African soul singer Amil Stewart. Gigi Proietti brought expected high style theatrical delivery of the text.
Mr. Piovani is a master of descriptive music, and he is very adept at diverse styles ranging from soul and pop to symphonic styles ranging from easy listening to avant-garde minimalist structures. All the styles were beautifully expanded to symphonic proportions. The art of the evening was not in the workmanlike creation of these musical styles as much as it was in the lively juxtaposition of the styles in service to a complex, emotional text.
It was a beautifully performed and presented evening, greatly appreciated by its audience.
Michael Milenski