Forget the brutal conflict between love and duty suffered by Lodovico Ariosto’s great chivalric hero Orlando. General director Matthew Shilvock made a curtain announcement that mezzo soprano Sasha Cooke, the Orlando, was indisposed, but would sing the famed Italian castrato Senescino’s role anyway. Thus the performance was compromised, Mme. Cooke’s Orlando pallid indeed.
Further compromise — Orlando’s arch rival in love was sung by Adler Fellow counter tenor Aryeh Nussbaum Cohen. He replaced David Daniels, the “me-too” disgraced counter tenor who brought virile flash to Xerxes’ Arsamenes a few years back and surely would have cut-the-figure to woo Ariosto’s femme fatale Angelica away from Orlando. Mr. Cohen has a lovely, smooth mezzo voice of feminine grace. Costumed as a middle aged business man Mr. Cohen did not make the cut vocally or figuratively.
The production came from Scottish Opera. Its conceit is that Edward VIII who abdicated the British throne (and the implied responsibility to battle Nazi Germany) for his love of American socialite Wallis Simpson serves as an admonition to Orlando (Italian for the famed knight Roland) that he forget love for a while and get on with saving Europe from the invading Saracens. 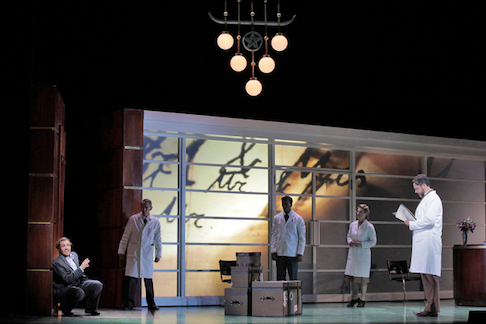 Orlando (far left), Zoroastro as psychiatrist (far right), supernumerary nurses
And so the action was in some sort of WWII hospital, Orlando a shot down pilot or something, with clothing of that period. It is a post-modern fashion look well known here in hip San Francisco where the Edward VIII abdication is a minor, if salacious though quaint footnote to ever more distant history. This 2011 production perhaps found greater resonance in the United Kingdom.
Essentially Orlando who has saved Isabella loves Angelica who has saved Medoro and is in love with him but has to deal with Orlando who goes crazy. Dorinda is crazy in love with Medoro who has to deal with her. The magician Zoroastro oversees it all. The language is purely pastoral.
Handel deals with all of this love and madness in the flow of his magnificent arias, plus a sublime trio at the conclusion of act I. Handel scored his 1733 opera for a very large orchestra, thus the resonant strings of the San Francisco Opera Orchestra were quite appropriate. Add two recorders, two blasting horns, two plaintive oboes, a splendid vibrato-less cello duet and two fine sopranos and Handel’s opera took flight. In fact under English early music conductor Christopher Moulds Handel’s music soared.
Only to be grounded in a small, low one wall set that turned around from time to time to accommodate British provincial stage director Harry Fehr’s stolid concept where everything is squarely explained as in a play. Handel and Ariosto’s imaginative, magically musical and pastoral impulses were forsaken to a purely earthbound narrative. It was hard to stay interested, thus there was significant audience defection after the second act. 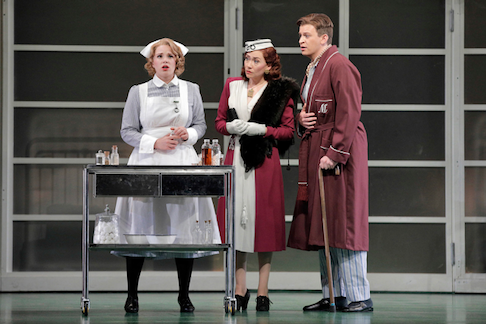 Dorinda, Angelica, Medoro
The greatest vocal pleasure emanated from young Austrian soprano Christina Gansch who found the poetic naÔvetÈ of the nymph (nurse) Dorinda in very communicative singing. Once again soprano Heidi Stober as Angelica proved she can do anything (everything from Magnolia Hawks in Showboat to Marguerite in Faust). Within the limitations of the concept she even found some of Ariosto’s magic and a great deal of Handel’s genius. San Francisco Opera’s catch-all bass Christian Van Horn did a workmanlike job of delivering Zoroastro.
Stage director Fehr inserted recorded bombardment explosions to confuse and disturb Orlando’s musical madness, and a sterile box to stifle Orlando’s florid delusions. So much for Orlando furioso.
Handel however happily survived it all.
Michael Milenski