But it does have several hours of quite beautiful music to be sung and danced, and that has happened just now in San Francisco. Soprano Rachel Willis-Sorensen made her role debut as the “rusalka” or water sprite who has fallen in love with a hunter who is, incidentally, a prince. The role is a tour de force.
Seated in a moonlit tree Mme. Willis-Sorensen (35 years old) captured all of the naive magic of Dvorak’s famous Song to the Moon. Her considerable vocal resources are now fully realized (she was an ingenue Eva in SFO’s 2015 Meistersinger) and in this Rusalka fully utilized — even though she is voiceless for the entire second act when she must confront her competitor, the Foreign Princess. Rejected she returns to the forest to confront her destiny — that she kill the hunter she loves or forever lure men to their death with her kiss. 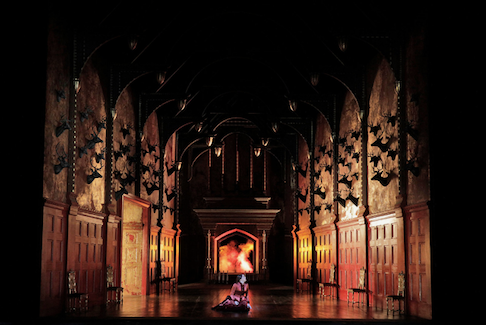 Act II Hunting Lodge
This occasioned quite a lot of singing. Mme Willis-Sorensen acquitted herself magnificently, the beauty of her silvery colored voice raging and caressing with unfaltering strength the conflicting emotions of her lost innocence. The hunter prince returns to her only to be pulled into the depths of the earth by her kiss. But not before joining Rusalka in one of opera’s most thrilling duets, it’s emotive extensions dissolving into an ultimate resignation to loss.
Tenor Brandon Jovanovich, a veteran hunter prince (he has recorded the opera with Anna Maria MartÌnez)) again brought beautiful, secure singing and ardent acting to this role. Mr. Jovanovich naturally brings the genuine innocence required by most tenor roles, plus he retains the requisite physicality. He is a unique artist.
The David McVicar production from Lyric Opera of Chicago gently embraces a lament of the effects of human intrusion into the natural world. The concept engenders a mysteriously lovely, animated forest marred by a concrete sewage dam, and a gigantic, trophy laden hunter’s lodge with carcass laden kitchen. Huge subtle atmospheres were thereby created that provided requisite presence for the unexpected monumentality of Dvorak’s score. 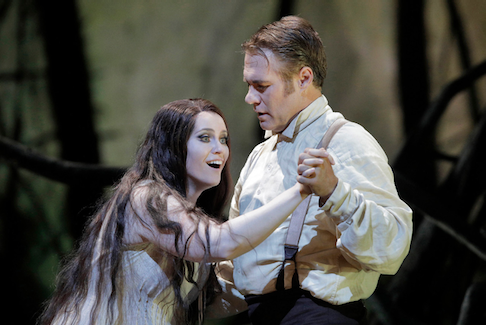 Rachel Willis-Sorensen as Rusalka, Brandon Javonovich as the Prince
Houston opera principal guest conductor Eun Sun Kim drove the emotional flow, pulling the vibrant Dvorak colors from the triple winds of the opera orchestra, urging full-throated force from its strings. Unlike the subtlety of the McVicar production Ma. Kim strove for immediate effect. It was thrilling when it was not overpowering. This talented conductress did find balance in the final moments of the duet. Its hopelessness seemed genuinely felt.
The three Wood Nymphs were appropriately embodied by three delightful Adler Fellows who frolicked together with the Opera’s corps de ballet in motions of rustic grotesquerie. British operatic choreographer Andrew George as well created the extensive balletic dance caricatures in the second act hunting lodge. The witch Jezibaba who transforms Rusalka into human form was sung by mezzo Jamie Barton with exaggerated grotesque sophistication. 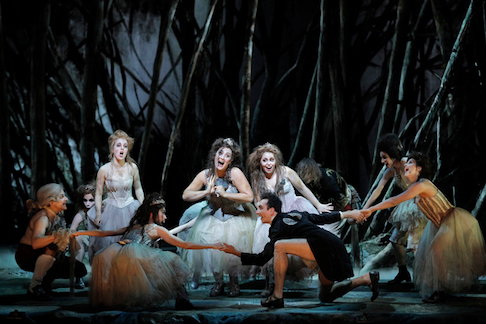